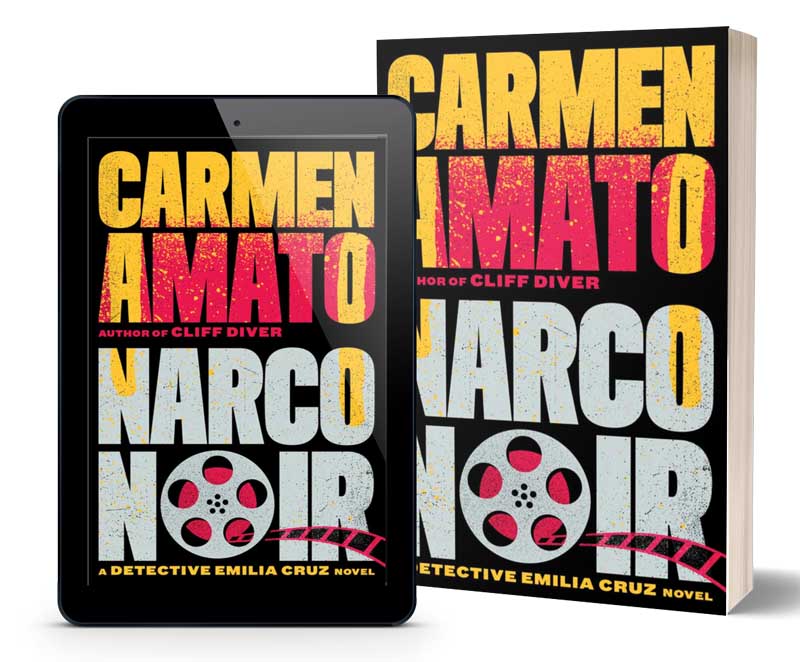 Emilia goes undercover as a taxi driver to catch a killer, but a dangerous detour takes her to a movie set and the choice that will change her life forever.

Once again, artist Matt Chase has created a bold and dramatic cover. 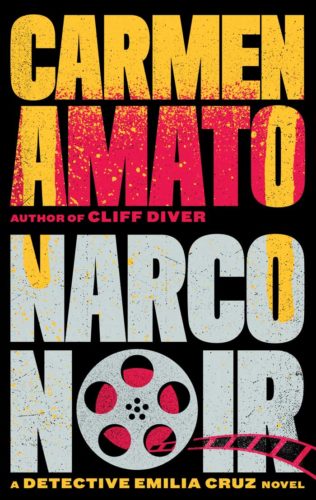 A film reel stands in for the letter “O” in NOIR. The black background represents the darkness of the narco thriller genre. I love that the inside of the reel is blood red . . . for good reason.

Death of a taxi driver

NARCO NOIR is based on the front page story of the 23 November 2013 international edition of The Miami Herald. Honduran taxi driver Benjamin Alvarez Moncada, affectionately known as “Don Mincho,” was murdered in the capital of Tegucigalpa.

Don Mincho was shot by a 15-year-old gang member as he sat in his taxi waiting for the after-Mass crowd. The killer fired 3 shots and then “ambled away as casually as he had arrived.”

The killer represented a gang extorting money from the taxi drivers. Each of the drivers paid about 25% of their weekly income to the gang. When the gang demanded a huge increase the drivers refused. The gang then delivered a message.

I saved the newspaper in my tickler file. Seven years later, with the crime transplanted to Acapulco, Don Mincho’s story is retold in NARCO NOIR.

The movie-themed plot twist in NARCO NOIR was inspired by actor Sean Penn’s 2016 meeting with Joachim “El Chapo” Guzmán Loera, head of the Sinaloa cartel, as published in Rolling Stone magazine. El Chapo, now languishing in prison in the US, was Mexico’s most famous criminal fugitive at the time of his meeting with Penn. He’d already escaped from Mexican prison twice and “pioneered the use of tunnels to transport his products and to evade capture.” Penn was assisted in connecting with the fugitive El Chapo by Mexican actress Kate del Castillo, who famously played the title role in the La Reina del Sur television series. https://www.rollingstone.com/politics/politics-news/el-chapo-speaks-40784/

The article sparked online gossip that El Chapo wanted to make a biopic of his life, with Penn as the star.

Colombian druglord Pablo Escobar similarly wanted to have a movie made of his life, with a screenplay written by his on-again-off-again lover Virginia Vallejo, who wrote about their relationship in LOVING PABLO, HATING ESCOBAR.

A biopic about the fugitive head of a drug cartel?

The random murder of a taxi driver. A druglord who wants someone to make a movie of his life.

Well, it all starts on the day Emilia’s worst enemy gets into her taxi . . .

He had short hair, not the dramatic curtain sweeping his shoulders that Emilia remembered. Instead of the loose cotton pants that left little to the imagination, with the tattoo of a black-robed Santa Muerte on display across his naked chest, he was still muscular under a finely tailored suit with a shirt open at the throat.

Emilia could barely breathe. He was playing the role of a prosperous businessman, no longer strutting across a makeshift stage in the middle of nowhere, no longer exhorting worshipers into a frenzy of prayer to Santa Muerte as his cohorts picked out women in the audience for his sex trafficking operation.

Need to Catch up?

Is he obsessed with Emilia? Find out in RUSSIAN MOJITO: Detective Emilia Cruz Book 7: https://geni.us/russian-mojito