From Panama to Mexico and back again 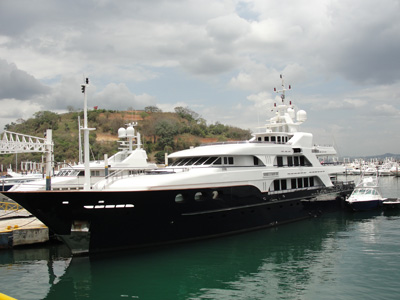 Every thriller needs the big climax, right? But suspense needs to be built with action scenes that intrigue us.

Remember how in THE KEY TO REBECCA, there’s the big climax in the desert as the spy, Wolff, tries to get the radio he’s left with the Bedouins so he can transmit the stolen plans for D-Day? Author Ken Follett had already shown us the desert–we already knew its dangers and difficulties–in his careful build-up to the finale.

In the same manner, political thriller THE HIDDEN LIGHT OF MEXICO CITY takes us to the ocean at night. On the edge of a city called Panama, there’s a marina full of boats promising an instant getaway. Rain falls from an ashen sky and water swirls around the dock. It’s a build-up to the cartel jefe and the storm and the yacht and . . .

No spoiler today, just an explanation how a yacht came to feature in a thriller largely set in land-locked Mexico City. 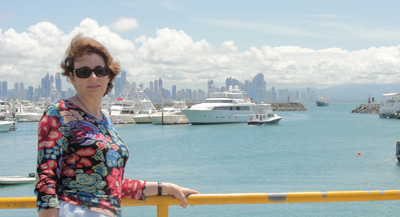 Panama is a skinny country bisected by the famous Canal and flanked by two oceans. Panama City is on the Pacific side of the country, with a marina where the rich and famous park their yachts. When I saw the marina for the first time, I knew it could be the ultimate mystery setting for some very nefarious business.

A black yacht, radar domes atop ocean-going vessels, locked piers–they were all found under a stormy sky at the end of a long strip of tarmac jutting into the ocean like an accusing finger.

Here are the pictures I took of Panama City’s marina, and the scene in THE HIDDEN LIGHT OF MEXICO CITY they inspired: 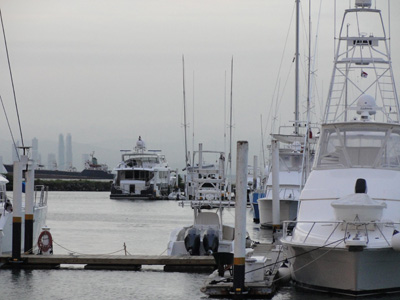 You can see Panama City’s skyscrapers in the distance

The ocean rippled gray under the night sky. In the far distance they saw the lights of ships lined up to pass through the Panama Canal. The soft rain made Eddo feel soggy but no cooler.

Panama City’s Amador Causeway ended in a parking lot that led to a pedestrian plaza lit by streetlamps and surrounded by water on three sides. A cluster of popular restaurants served people from the cruise ships docked nearby. Further from the parking lot, with the water lapping up to the railings, was a Duty Free store and a restaurant called Alfredo’s Café. Across the wide open space was a private marina full of glittering white yachts with signs to keep out those who didn’t belong. The marina was full. 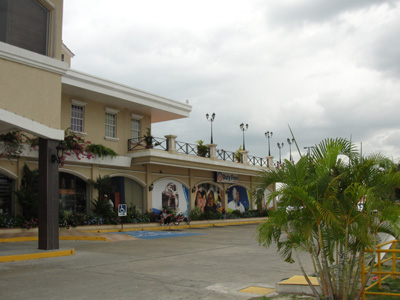 Alfredo’s Cafe occupies the left side of this building. The colored windows are a duty-free store for cruise ship passengers.

People could be seen through the windows of Alfredo’s Café. The sound of muted speech and laughter drifted along on the moist air from the covered outdoor seating areas of the restaurants beyond the parking lot. Eddo and Tomás strolled along the water’s edge, the only people outside in the soft night rain. Eddo resisted an urge to look at his watch.

A thin man in black, no bigger than a shadow, crossed the plaza from the distant parking lot. He stopped several yards from them, vaguely Asian in the uneven light. “Cortez?” His voice was a gravelly whisper.

The thin man walked past them and they followed him to the marina gate. He unlocked it and gestured for them to step down onto the floating pier. Eddo heard Tomás say “Fuck” as the pier heaved under their weight.

They continued walking down the pier, the boats on either side moving gently in the swell caused by their passing. At the end of the pier the thin man indicated a boat. He said something to someone on board and a light flashed on.

This yacht’s black hull made it the most striking boat in Panama City’s marina. I wondered who the owner might be . . .

The boat was one of the smallest in the marina. Eddo grabbed the ladder at the stern and clambered up. Another man dressed all in black met him at the top and pulled him into a dark cabin. Tomás got similar treatment.

From inside the cabin, the boat’s running lights glinted through the windows, making small, angular patterns on the walls. Engines revved and the boat began sliding out of the slip, throwing Eddo and Tomás against the built-in benches that lined the cabin. No one spoke as they were righted and roughly patted down. The lights of the Amador Causeway receded as the boat picked up speed, churning the gray ocean into dirty foam. They passed a few yachts anchored beyond the marina and kept going, apparently headed for open water. 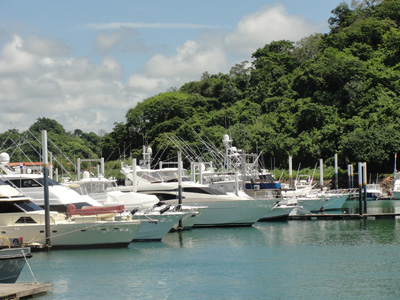 A rare sunny day visit to the marina gave me this view of boats, taken while standing in front of the duty free store next to Alfredo’s

Eddo’s cell phone was pulled out of his pocket and handed to a guard who left the cabin. Through the window they watched him dump it over the side. Tomás swallowed a protest as his phone went overboard, too. The man in black found the CD.

“Señor Cortez can keep his CD.”

If you have read the book, please remember to leave a review on Amazon. It’s the best way to let other readers know the quality of a book and help an author at the same time. 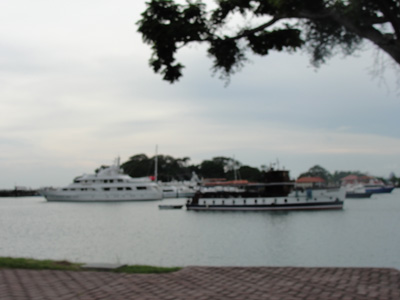