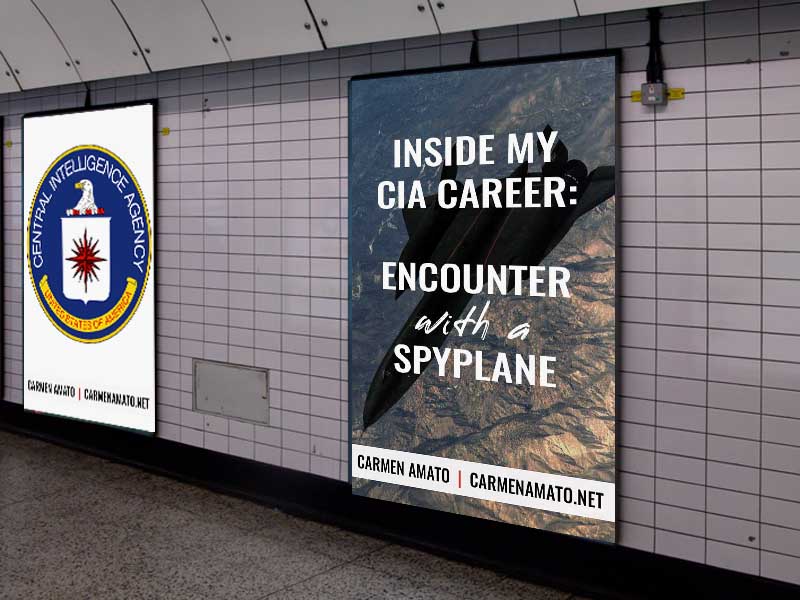 Several years ago, my husband got his private pilot’s license and we owned a small Piper aircraft. Our son was in kindergarten and promptly fell in love with all things aviation.

This rubbed off on me. Our family was soon immersed in flying stories, books about airplanes, model airplanes, and innumerable trips to the Smithsonian’s Air and Space Museum to see among, other aircraft, the SR-71 Blackbird spyplane.

I even wrote an aviation adventure story for my son, entitled THE SECRET BLACKBIRD. It was the start of a Hardy-Boys-meets-Dale-Brown middle grade fiction series. The second book in the series was entitled THE PACIFIC GHOST.

Both books remain on a floppy drive (!) in some desk drawer and were never published.

Work gave me another reason to be enthralled with the SR-71.

In the 1950’s, as the Cold War ramped up, the CIA wanted a way to peer down at the Soviet Union to determine military capabilities and such. The U-2, built by Lockheed’s “Skunk Works,” was doing the job, but was slow enough to be shot down, as happened to pilot Gary Francis Powers.

Lockheed built a new plane for the CIA. The new aircraft was designed to defeat Soviet air defenses by flying higher and faster than anything else in the world. This meant a whole host of innovations, materials, designs, etc.

The single seat A-12 OXCART emerged after 2 years of development. The overall design and titanium construction was the basis for the more well-known SR-71, the Air Force variant. The two-seat SR-71 was slightly larger and carried a different camera and sensor load.

Comparing the SR-71 and the A-12, courtesy cia.gov

After flying 29 missions in Southeast Asia During the Vietnam War, the OXCART program was shut down. The SR-71 Blackbird continued to fly and became infinitely more famous.

A scale model of the A-12 hangs from the ceiling of the atrium connecting the two main buildings of the CIA Headquarters compound. I have a paper model created for the CIA’s 50th anniversary.

Eight are in museums. One stands guard over the CIA Headquarters compound.

Encounter of a distant kind

I drove onto the compound one sunny day shortly after the A-12 OXCART was installed on a special platform with two stars carved into the marble to remember the CIA crew members who died in the line of duty.

Now, general parking at CIA HQ is a bit like Disneyworld. You have to remember which parking lot and which row.

But that day, there was no need to memorize my parking space. The nose of the A-12 OXCART was pointing right at my car. Perfect line of sight.

When I was ready to leave, I just had to follow the trajectory to my spot.

I was in awe of the enormous sleek black aircraft, a reminder of our intelligence heritage. I crossed the parking lot to the massive titanium plane and read the information display before heading inside.

The day passed. When I was ready to head home I took another walk around the A-12 before following its nose to my car.

Except like a portrait whose eyes follow you, the A-12’s nose pointed at all the cars in the parking lot. Acres of cars.

For the next hour, no matter where I walked in that $%&$# parking lot, every time I turned around there was the A-12 in the distance, pointing straight at me.

I eventually found my car.

But now I know why they call it a spyplane.

See the aircraft on the CIA compound in this short video from the National Air and Space Museum: