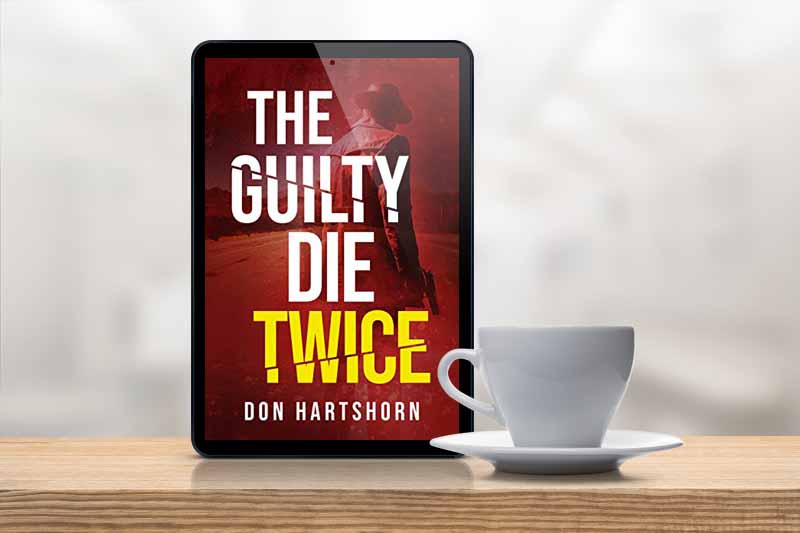 THE GUILTY DIE TWICE offers a memorable cast of characters, two pivotal crimes, lots of deliciously grubby political machinations, and both sides of the death penalty argument. The writing is both fluid and precise, without (thankfully) lots of legal jargon. The smooth pacing and flow make it exceptionally readable and hard to put down.

Travis Lynch is an attorney in Austin, Texas, who is barely able to make ends meet. His wife is pregnant, he works out of his living room, and he’s estranged from the rest of the Lynch family, scions of the Texas legal establishment. The reason for Travis’s difficult situation is tied to murderer Riley Sutton, whose execution takes place early in the proceedings.

Jake Lynch, Travis’s older brother, is the District Attorney (DA). Jake is a man on the rise. Powerful kingmakers are circling around. He’s the heir-apparent to the Lynch family’s legal legacy. Jake and Travis have not spoken in 10 years, when they prosecuted the Sutton case ten years ago as both friends and up-and-coming attorneys working in the DA’s office.

When a drug deal goes wrong, two high school boys are killed and another left paralyzed. A kingmaker’s son is one of the victims and the media is all over the story. Of course, no one wants the fact to come out that the victims were in a construction zone at 3:00 am to buy drugs.

Two arrests are made. The parents of the suspected shooter turn to Travis. He reluctantly takes the case, knowing he won’t be paid, but hoping to save the kid from a death sentence.

Meanwhile, Jake is pressured into charging the suspected shooter with a capital crime, triggering the death penalty. This pits Travis and Jake against each other in circumstances that hearken back to the Sutton case. Of course the backstory merges with the current timeline here and you finally find out what started the feud so long ago. What I liked so much is that neither brother is a white knight, but each is trying to follow their conscience in a very, very bad situation.

Both stories wrap the reader in double suspense. What happened during the Sutton case to create this feud between the two brothers? What will happen to the current murder investigation given all the political strings being pulled? Can this family ever be mended?

It’s a legal thriller but even more, this is a story about a family pulled apart by competing moral values.

The author Don Hartshorn has an interesting website with short stories and writing tips. You can find it here: https://donhartshorn.com/

THE GUILTY DIE TWICE was published by TCKPublishing, a small press with a unique tagline: “Wealth is in the mind, not the pocket.” How true! You can find TCK here: https://www.tckpublishing.com/