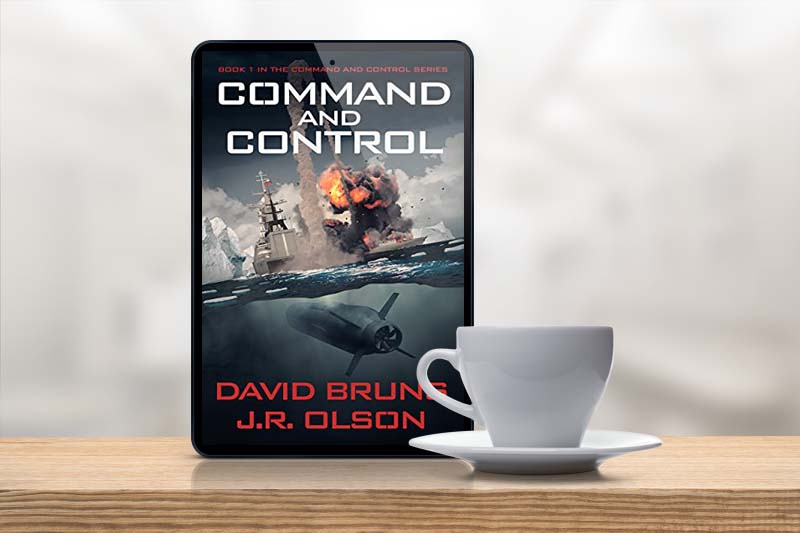 I was already a fan of this author duo’s espionage thrillers but COMMAND and CONTROL by David Bruns and J.R. Olson ratchets up the intensity to truly epic levels.

Buckle up, because this a fast-paced thrill ride through an ocean churning with conflict, tech wizardry, and global politics.

A string of unexplained attacks on US military forces have one thing in common: the latest Russian weaponry. Soon US forces are spread thin, not only in response to multiple threats, but also because of the new president’s vow to oust the illegal Maduro regime in Venezuela. As conflicts rage across the globe, a terror attack decimates the US Navy’s top brass gathered for a conference at Annapolis.

Don Reilly is head of the CIA’s Emerging Threats Group (a fictional unit) with access to the highest level of US policymakers (and enjoys a very enviable and fictional lack of bureaucratic red tape LOL).

He’s desperately trying to connect dots around the globe. Why would the Russian president, a thinly disguised Putin, want to go to war now? Why has North Korean suddenly decided to jettison its nuclear program? How was the Venezuelan military, on the brink of starvation and out of hard currency, able to procure the latest in Russian military technology? Who was behind the Annapolis terror attack?

Things aren’t adding up. Yet the world is hurtling toward war.

Besides Don, the cast of characters ranges from a shadowy operative who is enabling the transfer of Russian weaponry to global hotspots, to the Russian president who believes one of his inner circle is betraying him, to the US Navy admiral who must make life and death decisions as he sails his fleet into harm’s way near the Bering Strait.

Scenes are fraught with tension, and almost all are either turning or decision points. This is a long book, but it is all muscle, no fat.

Like Tom Clancy’s THE HUNT FOR RED OCTOBER, there is lots of military activity and technology here, but kudos to the authors for knowing that not every reader appreciates a data dump or pages of tech jargon. Instead, swift explanations enhance the action. Bruns and Olson bill themselves as the Two Navy Guys and their expertise shows. The scenes at sea are absolutely authentic.

The book puts you on the bridge of the aircraft carrier as radar tracks incoming danger. You are in the submarine as the Russian communications cable is hacked. You are in the helicopter as the missile zeroes in.

You are turning pages as fast as you can. Expect chills up your spine.

COMMAND AND CONTROL is the first book in a trilogy. The second, COUNTERSTRIKE is also available.

Get COMMAND AND CONTROL on Amazon here.