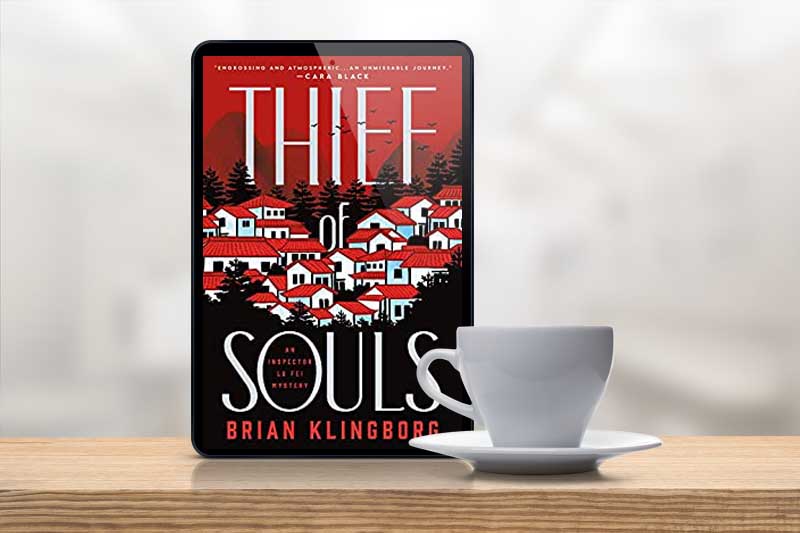 THIEF OF SOULS by Brian Klingborg

I love a mystery with a unique plotline in which a crime or a twist (or both!) is only possible because of the setting. And I love an author who pulls me into that setting and makes me experience it in an almost tactile fashion. THIEF OF SOULS is Brian Klingborg’s first Inspector Lu Fei mystery and he does all that and more.

There aren’t many police procedurals set in China to begin with and Klingborg goes for the doubly unexpected by avoiding Beijing, the locale of Peter May’s China Thrillers (THE FIREMAKER, etc) and bringing us north to Raven Valley, a mostly rural township outside Harbin. Lu Fei is the deputy chief of the Public Security Bureau there, answering to an ambitious boss who knows the best way to get ahead is to avoid doing anything controversial. The place is dull, leaving the single Lu plenty of time to drink at the Red Lotus and moon over the comely proprietress Yanyan.

A young woman’s murder upends the cycle of boredom and drinking, especially when it is discovered that her vital organs have been removed and the body sewn up neatly. Both security and Communist Party officials from Beijing descend on Raven Valley and China’s complicated internal workings go on display for the uninitiated.

Lu is soon caught between his old boss in Harbin, who hates his guts, and the upwardly mobile Beijing officials who will take credit for his work if he solves the murder and stick a knife in his ribs if he doesn’t. Or just because he’s inconvenient.

The book really delivers a look inside a system where the political party dictates reality based on the various players’ struggle for power. Everyone else must comply, no matter how illogical. In this way, the book is similar to Martin Cruz Smith’s groundbreaking Arkady Renko series which showed the warped logic of the Soviet Communist Party in GORKY PARK, RED SQUARE, etc.

Even as the most convenient suspect is pressured to confess, Lu investigates the victim’s posh lifestyle in Harbin, which is a huge contrast to rural Raven Valley where her body was found. He eventually connects her to a senior Party official. But that’s hardly the end of the case.

The book is fantastically atmospheric, with a sprinkling of Chinese poetry, wise sayings, and Chinese language words which are always put in context. I read it in two days, thoroughly immersed in the story and characters. The ending felt a bit rushed, but maybe that was me reading it at warp speed.

Bottom line? I’m grabbing the second Inspector Lu Fei novel as soon as it comes out.

Get THIEF OF SOULS on Amazon