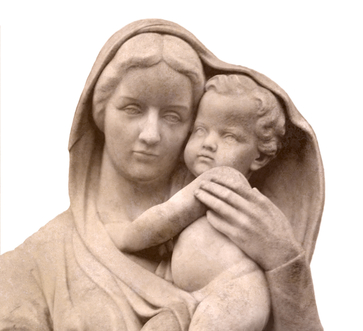 December is a big month for Mary, the mother of Jesus. On 8 December Catholics celebrate the Immaculate Conception, the day She became pregnant with the son of God without benefit of sex. On 12 December there is the feast day of the Virgin of Guadalupe to commemorate the day She appeared to the humble San Juan Diego in Mexico. And of course on 25 December we celebrate the day She gave birth in Bethlehem to Her son Jesus.

The feast day of the Immaculate Conception of Mary is a major event in Nicaragua, with celebrations dating to colonial times. My neighborhood, like so many others, enjoyed about 40 hours of intermittent fireworks (which reduced the dog to jelly), late-night festivites the evening before and a Mardi Gras-like celebration at the church up the road on the actual feast day.

The build-up to the weekend was as big a deal as for Thanksgiving in the US. For weeks the newspapers reported preparations across the country. Major stores ran related ads. Billboards and banners strung across telephone poles repeated words like joy, purity, conception, virgin, sainted.

The news reports were detailed—guardians of the tradition were interviewed, one chuch had a special “washing” of the silver before the big day, in many parishes the faithful carried the church’s statue of Mary in local pilgrimages, others planned concerts or novenas, the capital’s cathedral would feature a statue of la Santísima Virgen de la Purísima that is three meters tall and weighs two tons. The faithful call known as La Gritería was everywhere: What causes so much joy? The conception of Mary!

I grew up with Catholic ritual and love the traditions and symbolism. But this weekend, as the fireworks boomed, I found it hard to reconcile a fixation on feminine purity with the high rates of violence against women in Nicaragua.

And along the same lines, I can’t help but link violence rates with the societal attitude that brings us the sex position of the week in the newspaper. Once a week, there’s a “tasteful” drawing of a couple doing it, with tips for getting it right.

Femicide rates in Nicaragua have exploded in the past ten years. Univision reported recently that there were 29 cases of femicide in 2000 and 89 in 2010. While this may be less than on a bad week in Chicago, this is a significant trend for the relatively small Nicaraguan population.

Newspaper La Prensa reported in August that 48 women were murdered in Nicaragua during the first half of 2012, including two under 12, while some 96,000 women are in a “vulnerable state.” Of the 48 murdered, eight were raped before getting killed and 14 were known to the National Police to be victims of abuse, according to a report by the non-governmental organization Red de Mujeres contra la Violencia. The organization also noted that 78% of violence against women occurs in their homes and females between 18 and 45 years account for 61.25% of all assault victims.

I’m a little worried about what will be in the newspaper in the coming week. Univision reported that the special prosecutor for Women in Nicaragua, Deborah Gradinson, said that gender violence is multiplied by three when there are major celebrations.

So Mary’s on a pedestal as the woman who never had sex, real women are available to be kicked around, and new ideas for the sex beforehand are right here in the paper.

What causes so much joy? The conception of Mary!

Mary, Mother of God, pray for us.

← Crafting a Christmas at the Mercado A Nicaragua Christmas: Shopping at Mama Delfina's →