MADE IN ACAPULCO: Prequel to the Emilia Cruz Mystery Series Novels 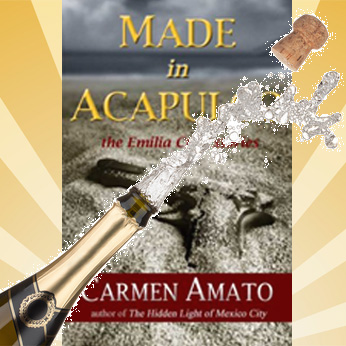 The Emilia Cruz mystery series delivered another bit of entertainment to mystery lovers yesterday with the release for Kindle of MADE IN ACAPULCO, a collection of short stories that take place before the action in the full-length Emilia Cruz novels. Paperback will be available on Amazon next week. The collection contains 5 short stories, including The Beast, which explains how Emilia fought her way into the Acapulco police department’s detectives squadroom, and The Cliff, which is the original Emilia Cruz story that became the basis of CLIFF DIVER. Related post: MADE IN ACAPULCO: Excerpt and Book Release News

This 2013 edition of MADE IN ACAPULCO has nearly all new content, considerably updating it from the 2012 first edition of MADE IN ACAPULCO, which was essentially only The Cliff in a Kindle Single format. The 2012 edition was unpublished when CLIFF DIVER came out, because the first section of the book and the story were so similar. The Cliff remains in this expanded 2013 edition of MADE IN ACAPULCO, however, for those who might not yet have read CLIFF DIVER. After all, it is the original Emilia Cruz story and introduces the Emilia-Kurt relationship in a way that flows perfectly with the other stories. Oddly enough, the handful of reviews for the 2012 edition reappeared on the sales page of the 2013 edition yesterday. Given the dates and enhanced content, these old reviews now don’t make sense. However, the book description does contain an explanation of the two editions so maybe that will help stem the confusion.

This edition of MADE IN ACAPULCO also includes the first two chapters of political thriller THE HIDDEN LIGHT OF MEXICO CITY. To my surprise, the Emilia Cruz series has eclipsed HIDDEN LIGHT in terms of sales and reviews. I hope this teaser can introduce more readers to a romantic thriller that I’ve always felt was the book Most Likely To Be Made Into a Movie. See the dreamcast here HIDDEN LIGHT is being featured this week on JustRomanticSuspense.com, where it is the only cover without a bare-chested man! The tagline accompanying the cover image reads “He fights cartels and corruption. She’s a light in the dark.” Sigh.

Of Wine and Bathtubs

Speaking of HIDDEN LIGHT, I was at a dinner party last night and one of the guests, a college professor whom I’d met once before, let me know she was enjoying the novel. It was her “guilty pleasure,” she said with a meaningful look, adding that the relationship between Eddo and Luz kept her turning pages. “Did it make you want to buy a bigger bathtub?” I asked. Whereupon her eyes got huge, she spilled some wine, and we both burst into knowing laughter.