The weekly Book Savor series grew out of my passion for good books, good friends, and great discussions about what we are reading.

And what is the best way to get those great book discussions going? With some thought-provoking questions of course!

Jason Beech: Mythago Wood by Robert Holdstock. I never read much as a boy, but I was once in WH Smith’s in Sheffield, England, and my dad told me to buy a book.

The cover got me first, then the blurb sounded odd and unusual. I’m not sure what that says. But it blew me away when I read it. It’s a story haunted by the main character Steven’s past, whose parents have died, his mother tragically. Returning from the Second World War he spends minimal time with his brother Christian in the family home before he disappears into Ryhope Wood. Their home stands at the edge of this wood and it is occupied by beings conjured by myth and peoples’ ever-changing perception of mythology. So there are bastardised versions of Robin Hood, some early Anglo-Saxons, roaming the woods, occasionally bursting from them into their garden.

The wood has paranormal barriers stopping just anybody getting in, but the characters can reach its core through persistence.

It sounds a little daft, but the characters are rich and yearning for something that seems out of reach, and the themes are epic. For example, Steven’s brother Christian has taken on his father’s obsession about the woods, into which he disappears searching for someone to give him peace. Steven’s friend Harry saw something similar when shot down over France, and is keen to get into this one because he sees his own salvation there.

Steven himself is trying to figure out his feelings for his father, (which is played out brilliantly with the Urscumug chasing Steven and Harry – you have to read it), his mother, and the hate he holds for his brother.

It’s about mythology and how it becomes distorted, as well as how history (including personal) always affects the present.

After reading it, I thought I was into fantasy, but I’ve really disliked everything else in the genre because of wooden characters with silly dialogue.

It struck a chord. I’ve read nothing else like it.

JB: Mythago Wood by Robert Holdstock, American Tabloid by James Ellroy (possibly the scariest book I’ve ever read, including any horror), and The Crow Road by Iain Banks. 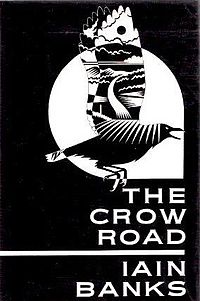 JB: The Crow Road by Iain Banks, because the book is about family and what happens when you neglect it. It’s sour, political, has epic swearing, a grandmother’s heart exploding during her funeral, and has you examining your family history and how you must continue to create new memories.

Then I’d ask him if he could have cut a few hundred pages from most of his novels, and ask if Britain has moved on much from Victorian times in social terms.

JB: “8.45 a.m. My mother is in the hospital grounds smoking a cigarette. She is looking old and haggard. All the debauchery is catching up with her.” From The Secret Diary of Adrian Mole, Aged 13 3/4

I need to take note.

I’m an Englishman in the US writing crime fiction and words with extra letters, and coaching the beautiful game to American youngsters.

I have one novel out, Over the Shoulder, and a short story collection, Bullets, Teeth & Fists, coming out in mid-August.

More about this week’s guest: Jason Beech is the author of crime drama OVER THE SHOULDER which I read in one weekend. I keep expecting to hear that Hollywood has called him, ready for the next great Goodfellas-type movie. Read my review of the book here.