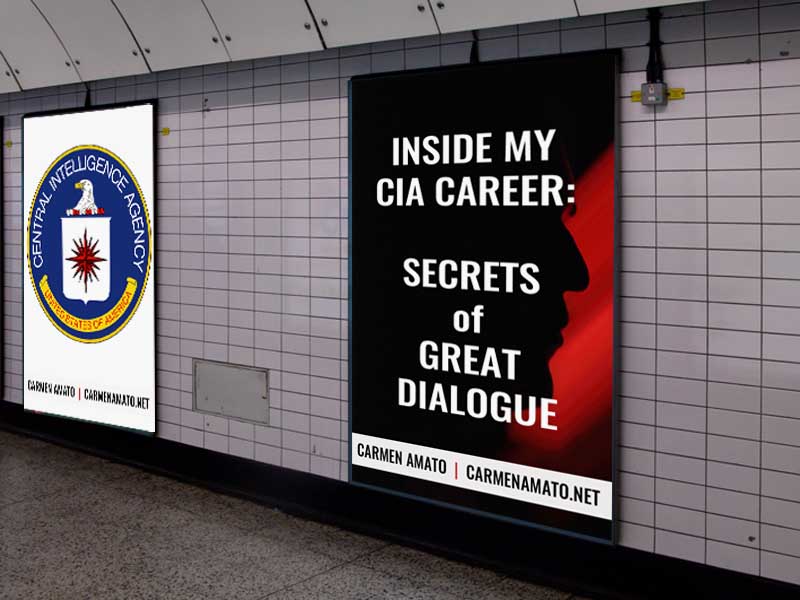 As happened so many times over the course of a 30-year CIA career, I was either a participant or an observer in a dialogue.

There’s more than one goal at risk or agenda being carried out.  I’m not talking about arguments, but carefully nuanced conversations. Goals and agendas are hidden.

In these situations, revealing a personal agenda, or “laying it all on the line” could become a vulnerability the other person could exploit.

As an intelligence collector, I became closely acquainted with those types of conversations. Over and over, without really knowing it, I got a lesson in crafting great dialogue by picking apart a transcript or recording to discover those hidden agendas.

Part of my collection of CIA challenge coins. These keepsakes are from internal components and/or Director of National Intelligence agencies.

Based on what I learned during my CIA career, here are the techniques I use to create tension-filled dialogue, especially in the Detective Emilia Cruz mystery series:

Deceptive behaviors: Deception, obfuscation, bluffs, rabbit holes, misdirection, failure to answer questions or rebutting a question with another question—all of that can happen during the course of a dramatic piece of dialogue.

A deeply desired objective: If at least one character has a focal point or a desired end state, dialogue can twist and turn around that objective. The scene becomes even more emotionally charged if the probability of achieving a desired outcome waxes and wanes.

Be the obstacle: Start dialogue by giving each character an emotionally-driven agenda AND make sure one of them actively tries to prevent the other from achieving something vital. Stick with one character’s inner voice to drive the tension.

I’m often asked what is the biggest mistakes authors make when writing spy thrillers and my answer is always the same. Not enough deception. (Hmmm. Maybe someday I’ll write the fiction author’s guide to lying.)

Books by John LeCarre and Jason Matthews layer on the deception and are very authentic as a result.

Here are a few resources to help you understand the power of deception in writing:

In SPY THE LIE, by former CIA officers Philip Houston, Michael Floyd, and Susan Carnicero, there is a great vignette in which CIA officer Phil is speaking to Omar, who has been an asset for 20 years. Phil suspects Omar of also working for an enemy intelligence service.

Phil’s agenda: find out the truth and be sure Omar isn’t concocting the story he thinks Phil wants to hear.

While the book doesn’t include a transcript of the conversation, it’s a great example of competing agendas.

Another great resource is THE COMPLETE GUIDE TO VERBAL MANIPULATION by James K. Van Fleet. Yes, such a book really exists. I think it is out of print. Hunt a copy in used bookstores.

Beyond the words, there’s the body language. I dislike scenes in which there’s paragraphs of dialogue without any idea how the characters are behaving physically. THE EMOTION THESAURUS by Angela Ackerman and Becca Puglisi is a great resource for suggesting behaviors that indicate stress, lying, or deliberate obfuscation.