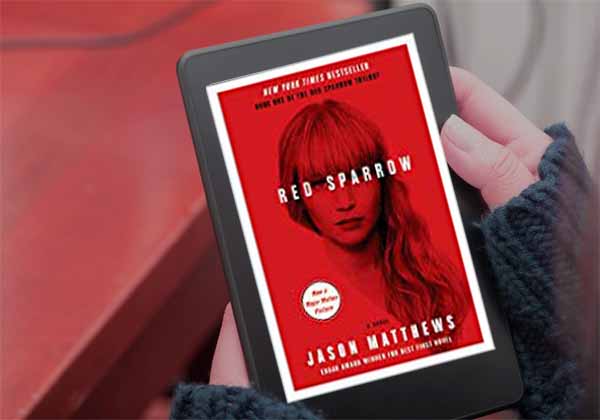 RED SPARROW by Jason Matthews is a gripping Cold War espionage thriller in the style of John le Carré’s thrillers. Except longer.

SPARROW starts with a heart-pounding and authentic scene of spy tradecraft in Moscow. Nathaniel “Nate” Nash is stalked by Russian security services as he meets with an important SVR agent—SVR being the successor to the Soviet KGB intelligence service—who hands him valuable intelligence files from the SVR vault. The agent isn’t identified and Nate hangs onto the goods, but his cover as an economic officer at the US Embassy in Moscow is tainted. He’s sent home, into CIA career limbo.

Next we meet Dominika Egorova and follow her road to becoming an SVR “sparrow,” an intelligence officer trained in the art of sexual seduction and recruitment. Her backstory is long and complicated as she goes from prima ballerina derailed by a rival to trained intelligence officer to “demotion” to sparrow. Her Uncle Vanya is a ruthless spymaster who manipulates Dominika and her career, holding family matters hostage so Dominika does his bidding.

Dominika is also rather unique in that she can see auras, so she knows when people are lying or have killed, etc.

Given a second chance, Nate is assigned to the US Embassy in Finland. Dominika is sent there to get to know the American and find out who he met in Moscow.

Soon Nate and Dominika are stalking each other at a public swimming pool in Helsinki and the Great Game of spy versus spy begins. The reader is immersed in the uncertainty and duplicity.

Does Nate recruit Dominika or does she recruit him? Are either of them a double agent?

Do they really fall in love? Or are both using sex to advance their careers?

Former KGB puppetmaster and now Prime Minister Vladimir Putin (this is before he was president) floats in and out of the narrative, perfectly described as a “blond scorpion with languid blue eyes.” Before the era of Facebook and online hacking, Putin’s intelligence services are up close and personal with their targets. They hunker down in Lada cars watching Americans walk the streets of Moscow and conduct psychological war through human proxies like Dominika.

Like le Carré’s THE LITTLE DRUMMER GIRL, the theme throughout RED SPARROW is who is real and who is false. Who is using and who is being used. There is so much meaty backstory that we are tempted to dig for buried clues. But there are many layers before we get to Russian bedrock.

There is also a short recipe at the end of every chapter in RED SPARROW, tempting us with delights like “Sparrow School Tokmach Soup.” At first I wondered if this was a joke, or a misguided effort to make an espionage thriller appeal to foodies. But in truth, it is just another way that Matthews lures us into his seductive world of spy versus spy. (If you are wondering about Soviet eats, check out the fabulous memoir MASTERING THE ART OF SOVIET COOKING by renowned food critic Anya Von Bremzen.)

The new RED SPARROW movie starring Jennifer Lawrence has gotten mixed reviews. I haven’t seen it, but if Hollywood followed the book faithfully, a lot has been crammed into two hours. For those who want to spend more time in the world of cloak and dagger, RED SPARROW is the start of an absorbing trilogy, which includes PALACE OF TREASON and THE KREMLIN’S CANDIDATE.