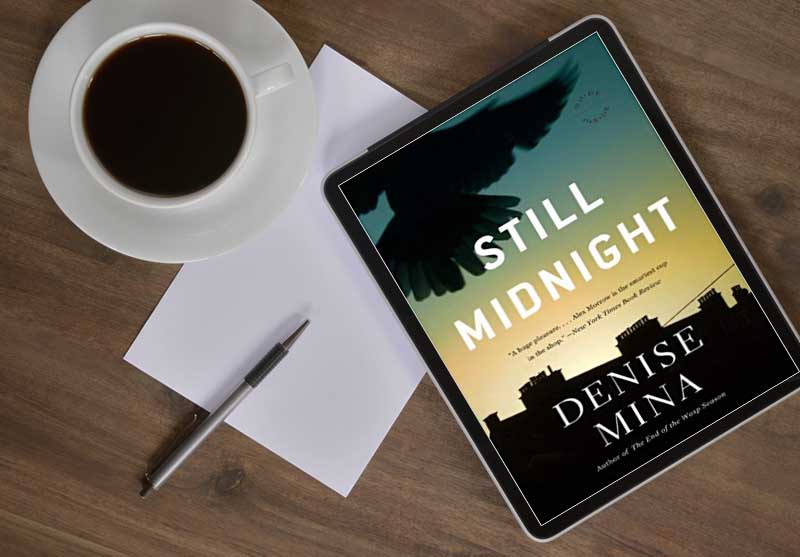 STILL MIDNIGHT by Denise Mina is the first book in the Alex Morrow detective series set in Glasgow and it’s a stunner. It’s a superb mix of Ian Rankin’s seedy Scotland from the John Rebus novels, Tana French’s angry female protagonist from THE TRESPASSER, and powerful points of view from Peter May’s THE BLACKHOUSE set in the Hebrides.

Alexandra Morrow is a senior police detective in Glasgow; good at her job and excellent at making enemies. She doesn’t want to go home; she only wants to work. She doesn’t care if no one likes her. She already doesn’t like them. Her roughshod attitude means that a colleague gets the plum assignment; she doesn’t much care about that, either.

Despite the attitude, we like Alex and know she’s a good detective. In fact, she and Acapulco detective Emilia Cruz could be soul sisters.

Alex investigates a home invasion. Two masked men confront a middle-class immigrant family, wound the youngest daughter, and kidnap the father, demanding a huge ransom from “Bob.” When talking to the police, family members variously say the kidnappers asked for Rob or Robbie. Turns out the younger son, who just graduated from university, once ran with a gang and his street name was Bob.

The name is just one of several subtle clues that twist and turn throughout the investigation and ultimately break open the case.

In addition to Morrow’s point of view, the criminals get their turn in the sun. They aren’t playing cat and mouse with the cops so much as following a shaky plan and adjusting on the fly when their personal dramas threaten to unravel everything. The leader is prone to drinking and making mistakes. His sidekick is smarter, with useful family ties.

A simple corner store owner in a low-to-middle class section of the city, the kidnapping victim’s voice adds drama. As he is manhandled by the kidnappers, he mentally relives his harrowing childhood escape from Idi Amin’s Uganda. His mother’s actions allowed them to escape but forever estrange mother and son.

What makes STILL MIDNIGHT so engrossing is that there is a reason for everything. No misfit dangles; even red herrings seamlessly fit into the story.

Glasgow’s gray roughness is on full display. Gangs, poverty, slang, discrimination. There’s no pretense. This is true Glasgow in the way that Rebus shoves Edinburgh at us.

Bottom line—STILL MIDNIGHT is extremely well constructed, alive with action and real dialogue. Even Alex Morrow’s anger has a reason and it’s a killer.