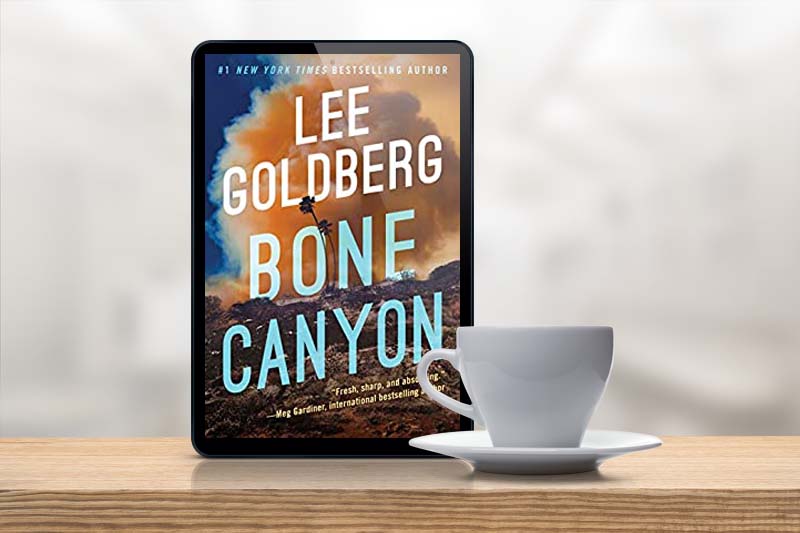 I love Goldberg’s Ian Ludlow series, starting with the ridiculously wonderful KILLER THRILLER, in which a nerdy writer repeatedly saves the world, but I was willing to go along for a more serious ride in BONE CANYON. A traditional police procedural, BONE CANYON delivers the same high speed action, unfussy writing style, and excellent plot development.

Eve Ronin is a detective for the Los Angeles County Sheriff’s Department, assigned to the Lost hills station near Calabasas, California. She used some inadvertent notoriety to climb the career ladder to her current assignment, a detail which has not endeared her to many colleagues. Meanwhile, her partner is counting down the days until he can retire and Eve is more or less estranged from her has-been showbiz parents.

Her life isn’t perfect, but Eve is making it work. She’s stubborn, athletic, committed to the job. I think she sounds a lot like Detective Emilia Cruz, albeit with a racing bicycle instead of a white Suburban.

The latest wildfires have cleared the hillsides, revealing the bones of a long-dead woman. Eve is able to make a positive identification and discovers that the dead woman was raped shortly before she disappeared.

Eve investigates the rape, assuming a connection to the woman’s death, when a second body is found. As the investigation continues, Eve’s chief suspect becomes another member of the Sheriff’s Department. With her notoriety now a liability, Eve faces danger herself.

Goldberg fans will love the reference to Hollywood and the Vine, the cheesy cop show Ian Ludlow ostensibly wrote. It’s a moment of fun that lightens a seriously good whodunit. All the threads wrap at the end, along with a teaser that primes us for the next Eve Ronin tale.

BONE CANYON is the second book in the Eve Ronin series, following LOST HILLS, but stands alone quite well.