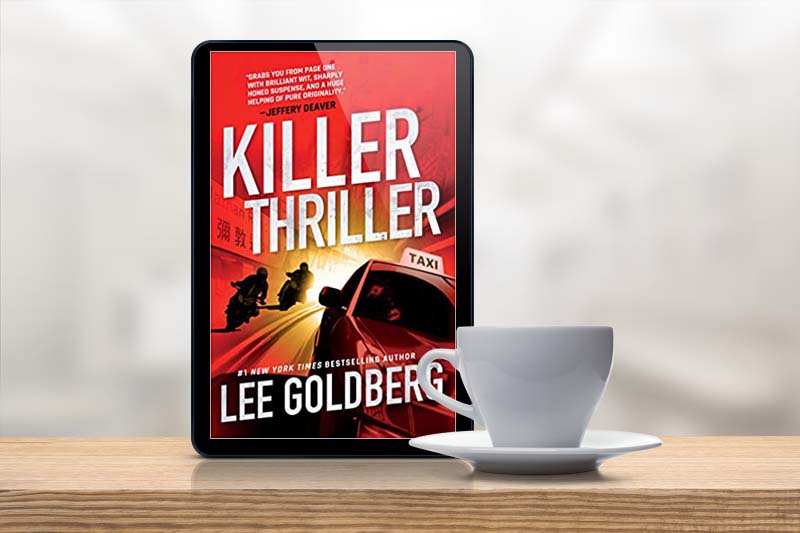 Action thriller writer Ian Ludlow is at it again in this zany unputdownable page-turner, the sequel to the equally wonderful TRUE FICTION. Like TRUE FICTION, KILLER THRILLER combines an over-the-top plot with author Goldberg’s own screenwriting chops.

As a result, the pace is brisk, the dialogue is clever, and the whole premise is refreshingly original and fun.

Ian Ludlow, a pudgy writer who lives in a bland apartment, is nothing like his main character, ultra cool action hero Clint Straker. Since saving the US from evildoers (in TRUE FICTION) Ian has gained a few pounds, written another best-selling Clint Straker thriller, and snagged a movie deal.

The movie Straker is being filmed in Hong Kong, and Ian is invited for a promotional jaunt. He arrives in Hong Kong with new assistant Margo French, his unlikely ally from TRUE FICTION. In short order, the movie script and Ian’s research for a forthcoming Straker book come to the attention of elements of China’s intelligence service.

These baddies are on the verge of completing an operation to take over the US by stealth. Ian’s notes eerily resemble the real-life operation. They assume he’s a CIA spy sent to thwart their operation.

Naturally, they have to get rid of him.

Add a ruthless assassin, a Wall Street Journal reporter whose identity is hacked by the Chinese, a Chinese starlet desperate to defect, and a whirlwind tour of Hong Kong, and Ian is once again riding a whirlwind and trying to figure out what Clint Straker would do.

Goldberg freely borrows from pop culture. There’s a little bit of Dr. Evil in our Chinese plotters. The president doesn’t mince words on Twitter. The star of Straker is a shortish action star named . . . wait for it . . . Damon Matthews.

Best of all, the action is punctuated by snippets of the screenplay for Straker which are so over-the-top that they deserve a place in the Pantheon of campy greatness. Not only do these excerpts provide some real laugh-out-loud moments, but they cleverly convey necessary technical details key to the plot.

Suspend disbelief, prepare to be entertained, and enjoy the crazy ride with Ian and Margo!

Get KILLER THRILLER on Amazon