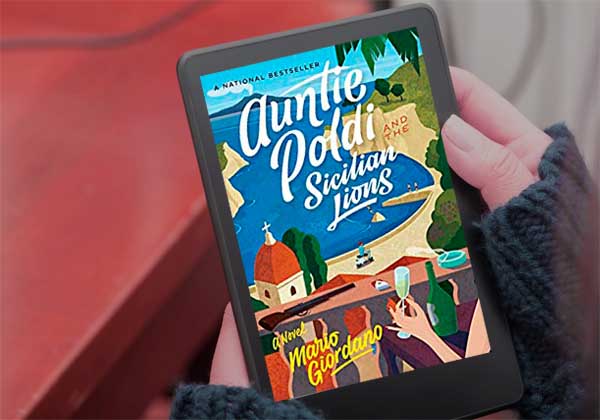 AUNTIE POLDI AND THE SICILIAN LIONS by Mario Giordino is a delicious whodunit, yet for this book review, it defies easy categorization. It’s one part Inspector Montalbano series by Andrea Camilleri and one part Don Camillo series by Giovanni Guareschi. Add a light sprinkle of AUNT JULIA  AND THE SCRIPTWRITER by Mario Vargas Llosa and you have a wickedly funny tale that is truly original.

Poldi is the nickname of Isolde Oberreiter, a 60-year-old German woman whose Sicilian husband recently passed away. Descriptions of her evoke Elizabeth Taylor in the 1970’s—caftans, bouffant black hair, imperious manner, lots of alcohol.

She takes a house in a small village in Sicily to be near her three sisters-in-law. Poldi, an ex-hippy, ex-costume designer, and the daughter of a German cop, plans to sit on her new rooftop terrace, look at the sea, and drink herself to death.

To refresh your memory, Sicily is the roughly trapezoidal island positioned at Italy’s toe, eternally waiting to be booted into the Mediterranean. A ferry trip across the Straits of Messina is a grand introduction to Sicily’s charms: almond and lemon groves, picturesque towns with cobbled streets, olde worlde trattorias where the locals meet for coffee, and pizza joints run by the Mafia. (Also creepy guys pestering women for phone numbers but, alas, I was 20 and this probably wouldn’t be an issue now.)

Poldi’s plans take a left turn when a young man who does odd jobs for her is murdered. As Sicilian law enforcement bumbles about, Poldi decides she will solve the crime herself.

Along the way, Poldi makes several enemies, runs into a poetry-spouting aristocrat and his Doberman, and is threatened by both a Mafia talisman and a dangerous intruder. She also becomes enamored of a detective who actually seems to know what he is doing.

In the end, Poldi unravels the case with the help of her sisters-in-law and the handsome detective, but the case nearly unravels her, too.

Part narrator and part Greek chorus, Poldi’s unnamed and unemployed German nephew shares her story with us. From his room in her attic, he’s perpetually writing the first chapter of a novel we know will be quite terrible.

It took great skill to craft a book this way and it shows. His narration never intrudes, but like the Vargas Llosa book, is a charming addition to the main plot. Descriptions are priceless, ranging from wryly humorous to laugh-out-loud funny. Dialogue deftly transitions from Poldi’s escapades to her brisk discussions with the nephew.

If you know a bit of Italian or simply love Italian food, you’ll appreciate AUNTIE POLDI AND THE SICILIAN LIONS all the more. The author doesn’t assume you are intimately familiar with Sicily, however, only that by the end of the book, you’ll never want to leave.