Why Acapulco is an Unforgettable Setting for a Mystery Series

Spenser has all of Boston to roam through, solving mysteries with Hawk at his side and meeting Susan later for dinner at Locke-Ober. Wallander has Sweden’s fog and gloom to wander, his melancholy matching the mist.  Arkady Renko contends with Moscow; taking us through the city’s shift from unsmiling Communist monolith to mafia-run knife-in-the-back dark streets. Guido Brunetti walks Venice’s rivas, his trusty ispettore in tow, a gourmet Italian meal awaiting him at home.

Detective Emilia Cruz has iconic Acapulco as her playground and the series makes use of its highs and lows. The city has grown increasingly violent in recent years as drug cartels battle over lucrative drug shipping routes into the US. But the city’s beauty and culture remain intact; the famous cliff divers still stun tourists, the dolphins still splash in the water park. But most of all, the sunsets, beaches, and blue ocean are among the best in the world. Not to mention the wonderful seafood.

With all that to work with, it is no surprise that the mystery series has been optioned for film. Acapulco makes a stunning backdrop for a mystery series. There is heat in Acapulco to be sure, but there’s also the warmth of Mexico.

Here is how the some of the most iconic settings feature in the Emilia Cruz mystery series. 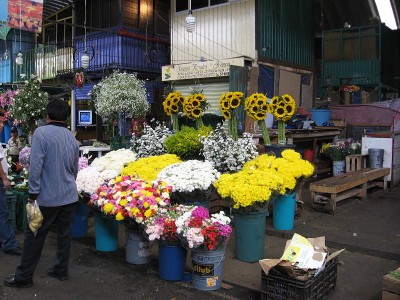 Markets in Mexico are some of my favorite places. They brim with colors, smells, and textures that can’t help but awaken your creativity:

There was more than one entrance into the market and she’d ended up by the food section. Vendors showcased their offerings by stringing up scrawny red carcasses that could be cats or jackrabbits or odd cuts of beef between the uprights of the booths. A bloody board invariably waited for the vendor to chop off as much meat as the customer could afford. The rest of the carcass would be put back on display and some unlucky late shopper would be left with just the head or feet.

Emilia stifled a retch as she plowed through, often having to turn sideways to pass through the narrow aisles full of dawdling shoppers and aggressive vendors. The meat section gave way to the fruit and vegetable stalls where the attar of rotting fruit was as cloying as the butcher smells.

She kept going, turning into a section devoted to containers: woven palm baskets, plastic tubs and buckets, melamine bowls and cups. In the aisle, two old ladies argued over plastic tumblers decorated with cat cartoons and Emilia had to practically shout “Permiso!” before they let her get by. The baby section was next, booths full of disposable diapers in clear plastic-wrapped bundles of 10 or 20 stacked next to cans of baby formula, cloth bibs, and boxes filled with assorted jars of baby food.

Dogs and cats in cages dominated the next aisle, along with bags of dry pet food. Emilia passed flowers and a shoe repair stand, a few men selling picture frames, and then she was in an aisle with candles on both sides, pillars of wax decorated with pictures of Our Lady of Guadalupe, San Juan Diego, and San Miguel el Arcángel. There were plain wax candles besides the religious ones, candles that smelled like apples or melon, candles that had strings and plastic coins wrapped around them to bring luck and wealth.

A turn down the next aisle and Emilia was in junk heaven. The booths were larger, each a second-hand store. Many had garish signs advertising their wares. A pig advertised Everything For The Home, while a pirate pointed to Hidden Treasures. The best sign incorporated a half-naked hula girl whose grass shirt spelled out Chatarra. Junk.

For most of us, Mexico conjurs up a great all-includive resort, with endless margeritas, scuba excursions, and a romance that we might not otherwise have had:

He kicked off his shoes and waited for Emilia to do the same. Together they stepped off the lower terrace and onto the hard-packed sand. They walked across the beach to the water’s edge and Kurt turned right to keep them parallel to the softly lapping surf. The sun was nearly below the horizon, just the rim of a fiery orange ball visible as it sank into the dark ocean, the kaleidoscope reduced to flickering stripes woven through the water.

They kept walking, holding hands, leaving the hotel further and further behind. Emilia let her sandals dangle from her free hand, trying not to think about Belize or the future or how the sunset reminded her of smoke and fire.

The hotel’s lights and music receded; the sand became more coarse and the ocean more angry and violent. The waves surged onto the beach and sucked at the sand, reaching higher each time, thirsty for something hidden underneath and angry when dragged away before the treasure was found.

Kurt slowed his steps, then stopped. Emilia looked behind them. In the distance, the hotel glittered down the whole length of the cliff. She could see the curve of the bay and the hotel’s private marina. Lights hung in the sky, and she knew it was the even more distant Costa Esmeralda apartment building. The dark night had swallowed up cement and stone, and only the lights were left to compete with the stars. 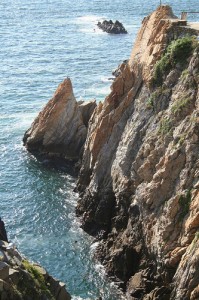 Mexico’s Pacific coast is Acapulco’s dramatic backdrop. The city’s 50’s Hollywood glamour has faded but the cliffs and the bay still make for the most fantastic views anywhere:

It was at least a dozen miles to Punta Diamante, the picturesque spit of land where the rich and famous played. Along the way, la Costera became the coastal highway called the Carretera Escénica, winding high up the side of the mountain that guarded the most scenic bay in the world. It was a ribbon of tarmac carved from the face of the cliff, lanes without guardrails or a safety net. Far below, on Rucker’s side, the bay twinkled and shimmered under the night sky. A few cars passed heading toward Acapulco but for the most part they were alone on the road with nothing to spoil the dramatic scene of mountain curves and glittering ocean . . .

The headlights in her mirror zoomed in. As the Suburban passed the deserted privada gate a salvo of gunfire tore the night and something hit the back end with a dull thud. The heavy vehicle shuddered and slewed to the right.

Emilia broke out into a cold sweat as she fought the wheel, trying to keep the vehicle on the high mountain road. The tires on the right side lost traction along the cliff edge. Time stopped for a day and a year before the lethargic vehicle responded and rumbled toward the center of the road and then the rear window exploded, spraying shattered glass inward. Emilia and Rucker both instinctively ducked as shards rained down. Somehow Emilia kept the accelerator pressed to the floor.

The Suburban lurched around a slight bend. The glare in her rearview was refracted for a moment and Emilia clearly saw the vehicle behind them. It was a small pickup, with at least four men braced in the bed. They all carried long guns.

“They’ll take us out here,” Rucker said. “There’s nowhere to hide and we can’t outrun them.”

“Brake and turn it.”

“Madre de Dios.” Before she gave herself time to think, Emilia hit the parking brake and swung the wheel to the left.

The small truck shot by as the Suburban screamed into the oncoming lane, tires chewing the tarmac, engine protesting. The mountainside loomed out of the inky darkness so fast Emilia felt the vehicle start to claw its way upwards. But momentum and gravity won out and the vehicle continued to spin.

The landscape was lost in a dizzying blur. Like a hand racing too fast around a clock face, they were pointed toward Acapulco in the right lane, then at the center of the road, then at the other lane, then straight at the cliff edge. Far below, white lines of waves rolled gently toward the sand, hypnotic and teasing.

END_OF_DOCUMENT_TOKEN_TO_BE_REPLACED 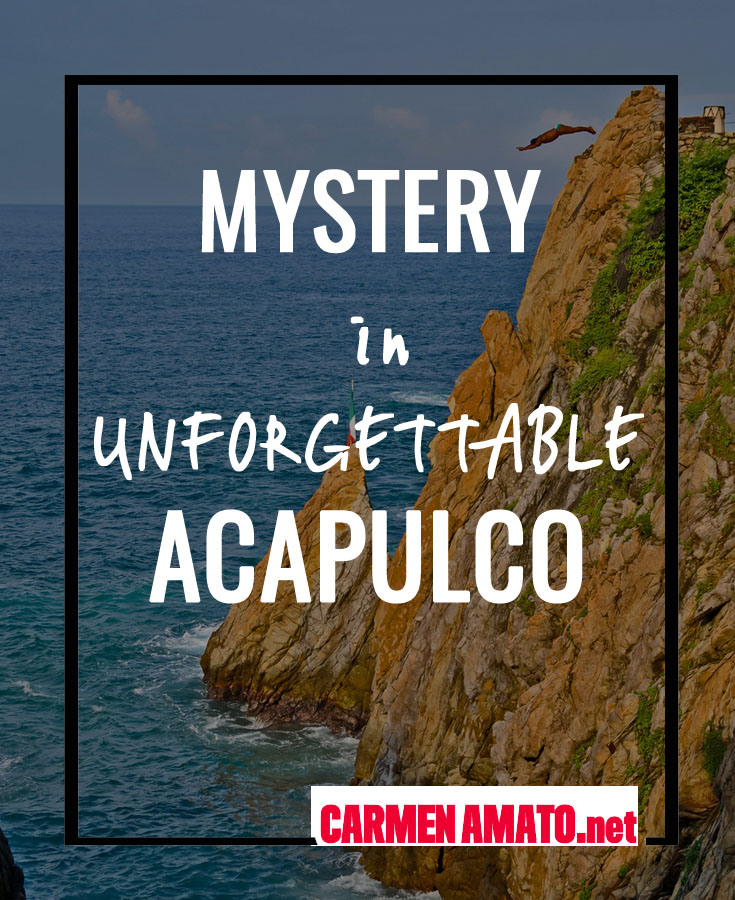