A Little Taste of CLIFF DIVER

Just to whet your imagination here’s a snippet of CLIFF DIVER, the first Emilia Cruz novel . . . 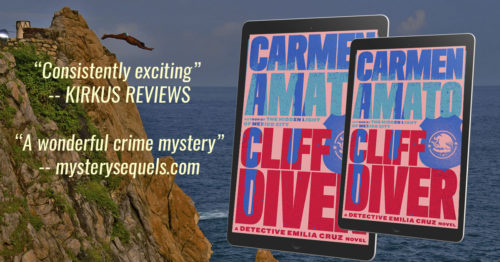 The diver stretched to his full extension then pushed off. His back arched and his arms stretched wide and he looked like a crucifix as he sailed over the rocks. His arms raised up over his head and his hands came together right before he impacted with the water. A spume of froth shot skywards and he disappeared into the depth as the crowd on the plaza gasped and applauded.

The diver popped out of the water beyond the rocks and the crowd applauded again. It took a few minutes before the next diver climbed onto the tiny platform on the cliff face. He was older, with a black suit and a heavy torso, and a less athletic look than the younger man. When he carefully turned his back to the ocean the crowd murmured excitedly.

“He’s got balls,” Kurt said. The back of his hand brushed against Emilia’s.

The diver launched backwards off the cliff face and twisted in the air. As his body rotated close to the cliff the crowd gasped, but he made a clean entry into the ocean, the water rippling out around him. The applause was wild.

As the sun set, they watched the other men laboriously climb up the cliff face to the small natural platform, stretch and limber their muscles and dive past the rocks to the perfect spot in the ocean far below.

“That’s me,” Emilia said as the youngest diver in the red suit stood poised on the platform, the spectacular sunset behind him.

“What do you mean?” Kurt asked. His hand turned and a finger stroked the inside of Emilia’s thumb and forefinger.

“That’s me.” Emilia’s hand turned of its own accord and gently played with Kurt’s. He was looking at her, not at the cliff divers, and Emilia heard herself babble nervously. “Falling off a cliff, not ready for it. Not knowing if I’m going to hit the rocks and be smashed to pieces or not.”

Emilia watched as the young diver swung his arms and rolled his neck and she wondered if he was doing it for the crowd’s benefit or if it was a release for his fear and nervousness. He hunched his shoulders forward, then pulled them back. His knees bent and his thigh muscles rippled and then he launched himself into the air. For a moment he was silhouetted against the blue sky and then he curled himself into a somersault. The crowd gasped as one as his body rotated and his hair seemed to kiss the cliff face. Then he stretched out, straining for distance, and completed a soaring arc that plunged him into the water like an arrow shot from a bow and Emilia felt the strain and the pain and the rush of cold water.

Get it today on Amazon!