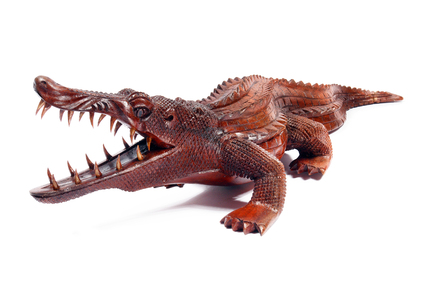 Land of the Unexpected

Once upon a time, I took a trip with a similarly adventurous-minded girlfriend to Papua New Guinea, which bills itself as “The Land of the Unexpected.”  I doubt it has changed much since then; it is a wild, mountainous place where the wheel was never invented. Civilization burst upon it as World War II rocked the South Pacific. Geographically, it is part of the Solomon Islands chain (think Guadalcanal) and WWII left the deep waters around it a graveyard for American and Japanese ships and planes.

In the capital of Port Moresby, we tasted crocodile in the hotel restaurant, did a little shopping for tortoise shell bracelets and a breastplate-sized kina shell to be worn as a necklace, and bought beer glasses at the South Pacific Lager brewery (I actually prefered the Fiji Bitters beer I’d had in that country, but that’s another story.) We also learned about the wartime Coastwatchers, the group of valiant locals that watched Japanese ships and planes and reported back to the Allies.

From Port Moresby we headed to the Highlands in a puddle jumper plane and found ourselves in Goroka, a settlement carved out of the wilderness that occasionally shivers from volcanic aftershocks. It’s home to the now sadly commercialized Goroka mudmen tribe and some of the strongest, most flavorful coffee in the world. While we were there the town observed a depressing cycle:  about 10pm every night drunken customers spilled out of the pool halls and bars and proceeded to rampage through the streets destroying whatever got in their way. Each morning everyone put the town back together again.

In the motel, where either the door or the window locked but never both in all the rooms the manager offered, we blocked the door with the dresser and stayed up nights watching a grainy cable station from Australia and listening to the commotion outside.  We told each other that the 1 in 4 rape statistic for the country might be the result of the passivity of the women we’d seen; we on the other hand were prepared to fight and fight hard. Luckily, it never came to that. 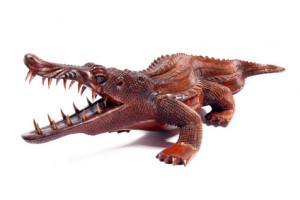 Despite the nightly rampages, we got out and about and presently found ourselves with a translator at a local market.  There were wonderful wooden carvings for sale, fanciful animals and platters and bowls and puzzles. There were baskets coiled into shapes both practical and fantastic.

An array of wooden crocodiles and seahorses caught my eye. Pointing to the largest croc, I asked how much it was. The translator queried the woodworker, a grizzled older man chewing betel nut which had painted the inside of his mouth bright red. He wore shorts and a dark shirt with the sleeves cut off and his dusty bare feet were  the size and shape of a large dinner plate.  He replied to the translator who then turned to me. “He wants to know if you’ll pay the first, second or third price.”

“You pay the first price, the highest, if you’re a Big Man,” the translator explained. A Big Man was someone of Importance in the tribe, a person who paid a price commensurate with the respect that was to be accorded them. The lesser second price was paid by those who either weren’t quite a Big Man in terms of respect or didn’t have a Big Man’s means. The third price, the lowest amount of money, was paid by those who were of no account. Basically, it was a system of paying in accordance with how important you were rather than how valuable the item was.

I paid the second price–certainly wasn’t the tribe’s Big Man, yet didn’t want to be in the “no account” category.

The crocodile I bought that day is still around, as is a tall seahorse and the kina shell I never turned into a necklace.  And every time I see another news story about Wall Street I think about the unexpected lesson I learned that day about the cost of being a Big Man.

END_OF_DOCUMENT_TOKEN_TO_BE_REPLACED 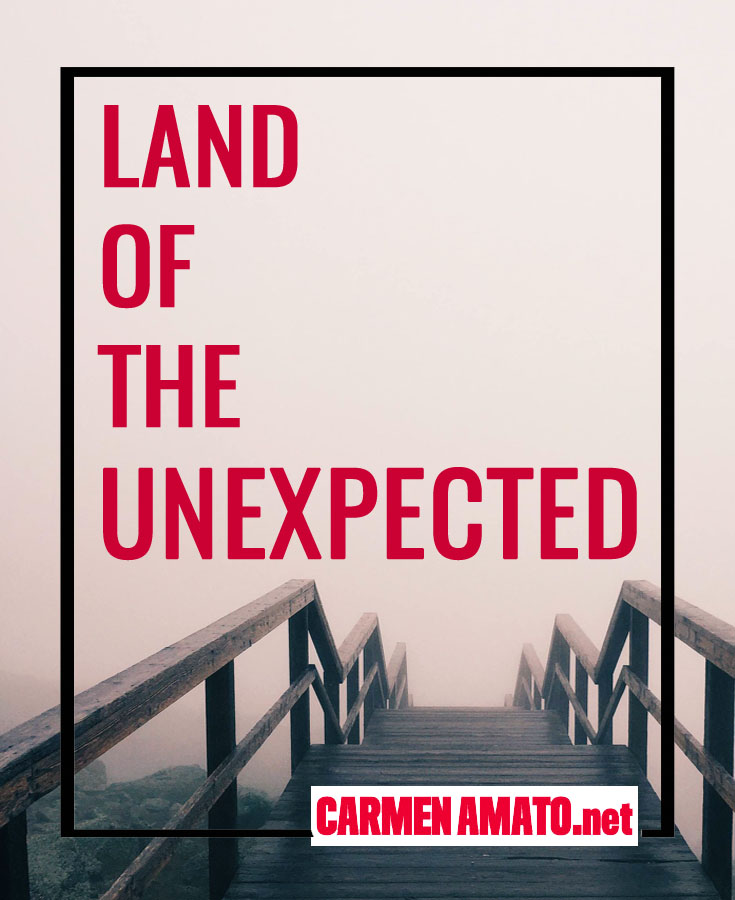