In 2014 I will donate $1 for each Kindle book sold to water.org, the charity co-founded by Matt Damon and Gary White to bring clean water and decent sanitation to communities worldwide. My little effort has expanded into the Writing for Water team of authors. The Water Diaries is a monthly series tracking our progress. 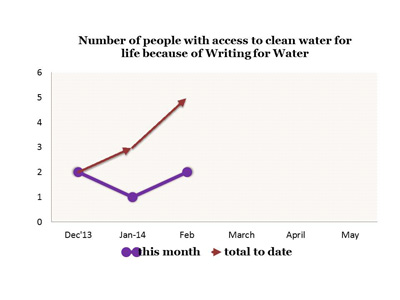 Strong February book sales mean 2 more people get clean water for life! No doubt helped by the super folks behind The Fussy Librarian (Jeffrey) and The All Mystery Newsletter (Rebecca), book sales in February topped December 2013, which had been a very good month, and were more than double what they had been in January.

Another piece of good news came in the form of two new authors joining the Writing for Water team in March; Norm Hamilton and Jerry Last. To celebrate, I sent out a press release entitled “Independent Authors Team Up for Water.org” to introduce the March team, and got a very nice email from Rosemary Gudelj at the Water.org GHQ. Rosemary wrote “Just wanted to thank you all for joining the mission in this powerful way. I work directly for Gary White, our CEO and co-founder along with Matt Damon. We would love to hear how this progresses!”

As this is hardly the biggest fundraiser supporting Water.org at any given time (one of their partners is IKEA) I was tickled that she reached out. I sent her back a thank-you and a free .mobi of MADE IN ACAPULCO on the off chance she has a Kindle. (She does. Yay!)

Our Readers make the Difference

It’s the readership that makes all the difference, of course, and if it wasn’t for engaged readers like you, no one would be getting clean water from our efforts. I’m tentatively setting a goal of providing 25 people with clean water for life from the Writing for Water effort. Throwing in December 2013 sales, the magic number so far is 5.

If you have bought one of my books for your Kindle in the last 3 months, you have helped give 5 people in need access to clean water for life. If you love to read, check out one of the books from the other authors below and sign up for my monthly updates here (you’ll get a free Emilia Cruz mystery story for your very own) to join Rosemary in tracking our progress.

We need every retweet, Facebook share, and email forwarding possible. The more folks who know of our effort, the more likely it is that we can get water to those in need.

And if you are an author who wants to make a difference, sign up here to join the team.

Arkansas-based author Sharon Lee Johnson writes fun, entertaining stories across genres from traditional romance to paranormal romances to YA zombie tales. The women in her stories are strong and determined women who discover their destiny in this life. So whether you want paranormal or a sweet romance, Sharon writes them all.

Canadian author and photographer Norm Hamilton’s debut novel is a compelling story about a dystopian Canada created by unrestricted gas fracking and irresponsible mining techniques. The novel throws new light on today’s concerns about the future of our environment. Norm’s other book will help hone your digital photography skills.

FROM THINE OWN WELL

This California author of The Roger and Suzanne Mysteries incorporates a clever cast of characters and exotic locations to keep his growing fan base guessing whodunnit. From Uruguay to Chile to California, the books provide local color and a menu of regional specialty foods to die for. Pun intended.

FIVE QUICKIES FOR ROGER AND SUZANNE

Originally from New York, Carmen Amato’s experiences living in Mexico and Central America drive the authenticity and drama of her thriller and mystery novels. Her Emilia Cruz series pits the first and only female detective on the Acapulco police force against Mexico’s drug war and culture of machismo. See why Amazon Hall of Fame reviewer Grady Harp wrote: “For pure entertainment and a gripping story likely resulting in nail biting, read Carmen Amato’s addictive prose. She knows this territory like a jaguar!”