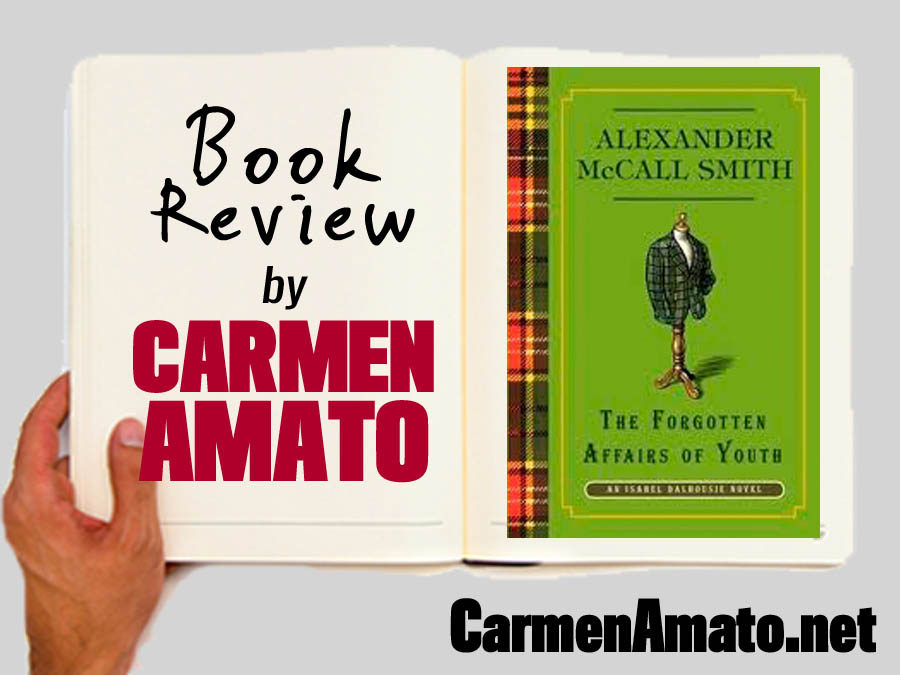 I actually feel it is the better written series, as it takes on many moral issues, and am often surprised that people know of the No 1 Ladies series but not about Isabel.

The series centers around Isabel, an attractive woman in her early-40’s who has a surprising affair in the early books with her niece’s ex-boyfriend, a much younger professional musician named Jamie. The brief union produces a child. Jamie moves in with Isabel—who is independently wealthy and also edits a philosophy journal—and much of upper Edinburgh society is genteelly shocked. In this novel Isabel and Jamie are still planning their wedding.

Besides the personal story, the Isabel Dalhousie novels each are a mystery, usually having to do with art, music, or Edinburgh society. Isabel is always helping out folks who have big life questions. In The Forgotten Affairs of Youth, Jane is a visiting professor who is trying to find her biological father. He was a student in Edinburgh years ago and Jane seeks help from Isabel, a longtime resident of the city. As Isabel looks into the past, unpleasant secrets are revealed. Jamie doesn’t want her to pursue inquiries into other people’s lives and the reader cannot help but hope the friction doesn’t damage their careful relationship.

Alexander McCall Smith’s Edinburgh is a gentler, more beautiful and cozy city than say, Ian Rankin’s Edinburgh. The mystery and drama are revealed in Isabel’s philosophic musings and walks around the city. I love the descriptions such as: “They reached the bottom of Candlemaker Row and turned into the Cowgate itself. Directly under the high arches of George IV Bridge the street became tunnel-like. The passed the Magdalen Chapel, a sixteenth century almshouse, in shadow and darkness.”

The ending is a nice twist, like most of the books in the series. I actually wished it could have gone on a bit longer.

Each book in the Isabel Dalhousie series is a small gem, to be savored and re-read when life gets hectic.

← Book Review: Blood of the Wicked by Leighton Gage Finding the Missing in Mexico: New Effort or Whitewash? →