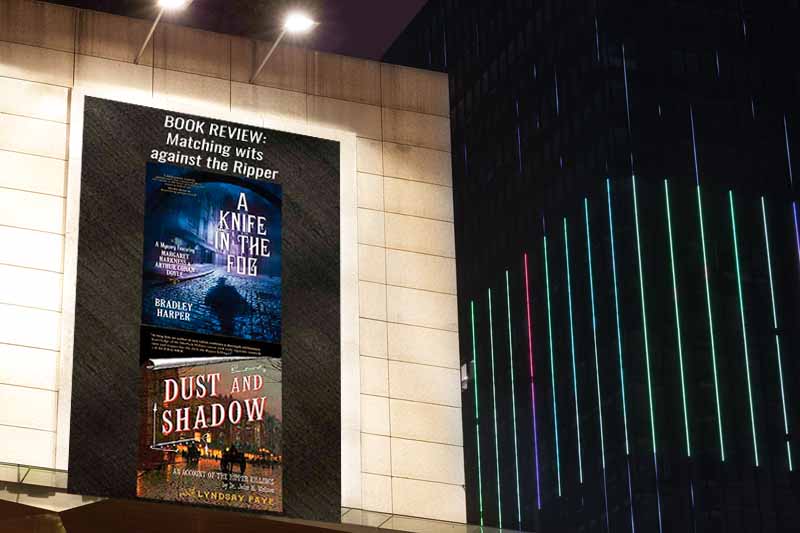 A KNIFE IN THE FOG and DUST AND SHADOW are both sensational thrillers. The two books have a few things in common, including exceptional historical research, an investigative trio, and a satisfying conclusion, yet each offers an original take on Victorian London’s most heinous true crime.

Sherlock Holmes vs Jack the Ripper

A KNIFE IN THE FOG by Bradley Harper goes beyond the familiar Sherlock Holmes construct with a truly unique set-up: all of the main characters are real-life historical figures who influenced Victorian society. The book rings with authenticity and the historical elements are executed faultlessly.​​​​​

The narrator is Arthur Conan Doyle himself.

In the summer of 1888, Doyle is a practicing doctor in  Portsmouth and has published A Study in Scarlett, the story which introduced Sherlock Holmes. His wife is pregnant with their first child and his future looks to be that of a general practitioner and family man, writing stories on the side to augment his income and amuse himself.

Doyle receives a summons to London from the office of former prime minister William Gladstone, whose secretary has read Doyle’s story and wishes him to become a paid consultant to find the killer terrorizing London’s East End.  Doyle agrees on condition that his former mentor, Professor Joseph Bell, joins the effort.  Bell, a Scottish surgeon and lecturer at the medical school of the University of Edinburgh and widely regarded as the real-life inspiration for the character of Sherlock Holmes, soon joins Doyle in London.

A third real-life figure joins Doyle and Bell. Margaret Harkness is an investigative journalist and social commentator whose writings expose London’s poverty and social injustices. Often using the pen name John Law and disguising herself as a man, Margaret will be an invaluable guide and ally.

By giving Doyle a voice of his own, author Harper has created a character as appealing as Holmes. Doyle is considerate and charming, with the formalities and vocabulary of the British gentleman of 1888. Doyle draws the reader into his confidence as the three develop a working relationship, navigate Victorian social rules as well as London’s dark and dangerous passageways, and encounter Jack the Ripper’s missives and victims. Margaret is tireless and Doyle’s growing feelings for her provide a quiet complication.

With deductive reasoning worthy of Sherlock Holmes, the three encounter danger and deceit on the way to identifying Jack the Ripper. The end is a heart-stopper.

DUST AND SHADOW by Lyndsay Faye delivers a more familiar construct in which Dr. John Watson narrates an investigation conducted by the famous detective Sherlock Holmes. Watson, as in the Conan Doyle stories, is the perfect everyman foil to his brilliant friend. Faye amps up the legendary Holmes formula, however, immersing the reader in the details of life with Holmes: his moodiness, restlessness, investigative prowess, the many trials of Mrs. Hudson the housekeeper. Holmes’s dialogue crackles with acerbic personality and sharp wit. I swear I heard Benedict Cumberbatch’s voice in my head.

An investigative trio is also formed in DUST AND SHADOW when Holmes hires Mary Ann Monk, the friend of one of the Ripper’s victims. The investigation initially turns on the whereabouts of an Army man supposedly seen with an early Riper victim.

Warned by his Baker Street Irregulars—the group of street urchins that provide Holmes with intelligence—Holmes and Watson are able to arrive first on more than one murder scene. When Holmes is stabbed in pursuit of the Ripper, the gutter press begins to question if he is the killer.  With his credibility strained and vigilantes out to get him, Holmes goes undercover to ferret out the Ripper. Mary Ann and Watson carry on until the three reunite for a stunning and wholly believable climax.

If you are a Sherlock Holmes fan or a student of the Ripper’s crimes, both A KNIFE IN THE FOG and DUST AND SHADOW are unmissable treats. The only spoiler I’ll reveal is that the identity of the Ripper is different in each book. Both are highly recommended.

END_OF_DOCUMENT_TOKEN_TO_BE_REPLACED 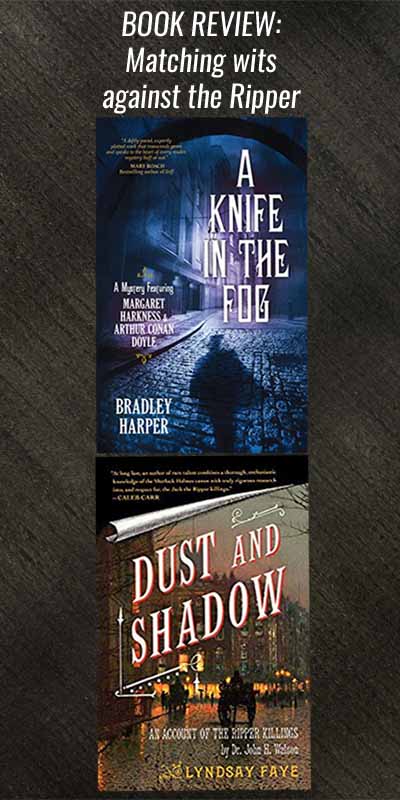