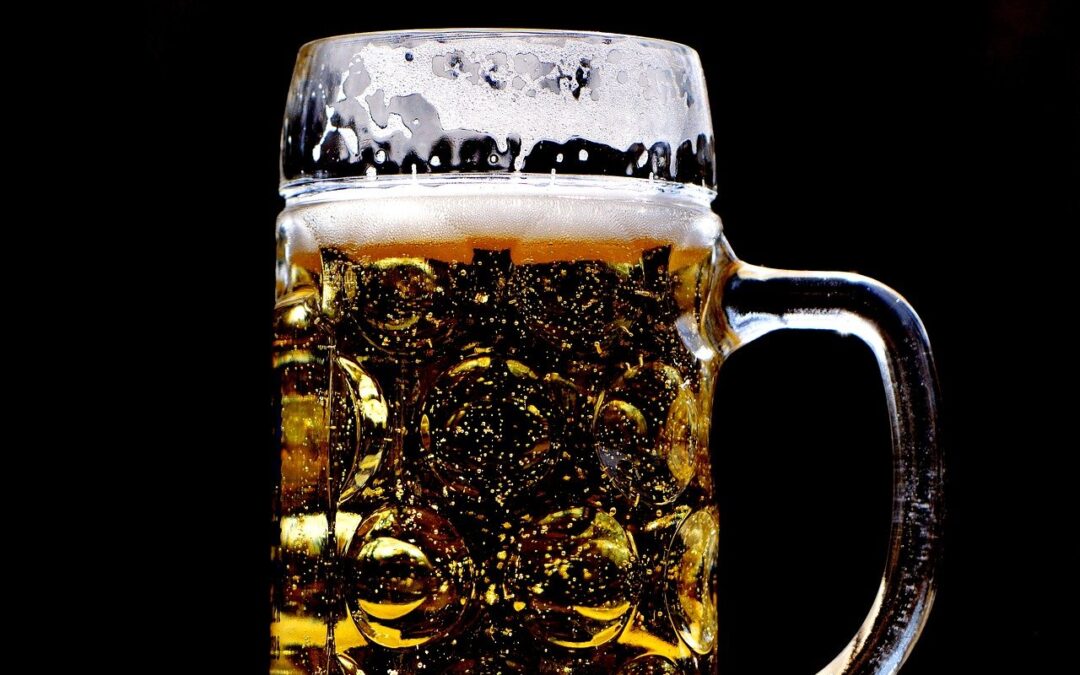 Researching the 1920’s for the Galliano Club books naturally means I have to research beer.

Notably beer in upstate New York, the setting for the Galliano Club series.

Beer is a hot commodity in 1926. Prohibition forbids it. The Galliano Club wants it. Bootleggers make it.

Murder and blackmail get mixed into the brew. Free refills, too.

My research led to a tour of the West End brewery in Utica, New York, more recently known as the Saranac Brewery. The brewery is home to the Saranac family of brews, of which Saranac Pale Ale is probably the best known, as well as Utica Club which was the first beer sold after Prohibition. Signs on the buildings still say F.X. Matt Brewing, after the company’s founder Francis Xavier Matt, a German immigrant.

As I drove up, I was hit by unexpected memories. When I was a child, my grandfather took family and out-of-town visitors to tour the brewery. This was before Saranac. Utica Club was very popular across the US and big billboards advertised the tour.

Back then, the brewery wasn’t as big as it is today but the tour was a major regional attraction. I recall it being very crowded. The trolley ride was unique and exciting, not to mention the free root beer for kids and two beers per adult.

Alas, the trolley is no more, but the tour still ends with a complimentary adult beverage in the downstairs bar which I sipped while furiously scribbling notes.

I was mostly looking for information about what the brewery produced during Prohibition and was not disappointed. Tour guide Tom Wynne told me that the brewery managed to hang on during the “dry” years, although just barely, by making a variety of non-alcoholic beverages. He opened a display case and took out half a dozen antique bottles for me to examine.

Malt tonic was probably intended for home beer makers. Perhaps to disguise that fact, the company put out a pamphlet-sized cookbook listing all the yummy things you could make with the syrup.

Then there was a fizzy wine substitute called “Champannetto Mum.” It was the kind of faux high society beverage that hapless accountant and erstwhile bootlegger Owen Fisher would drink as he plots to stay afloat on the wreckage of his life.

Here’s the tour in a 16-image nutshell: 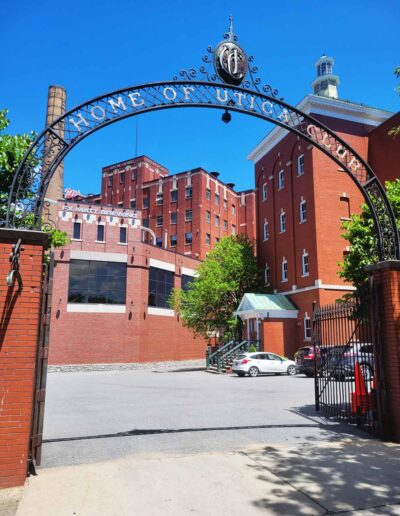 The Home of Utica Club Beer

The vintage arch at the brewery announces that you’ve arrived at the Home of Utica Club. 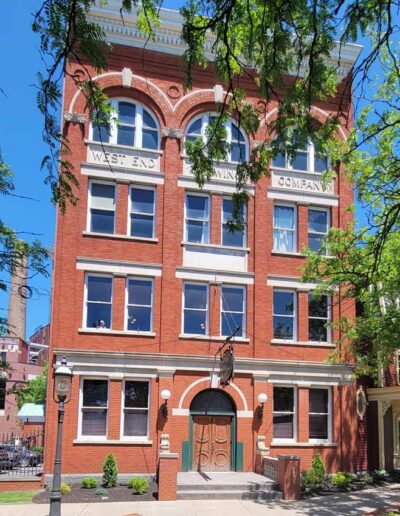 The original building on the West End brewery property 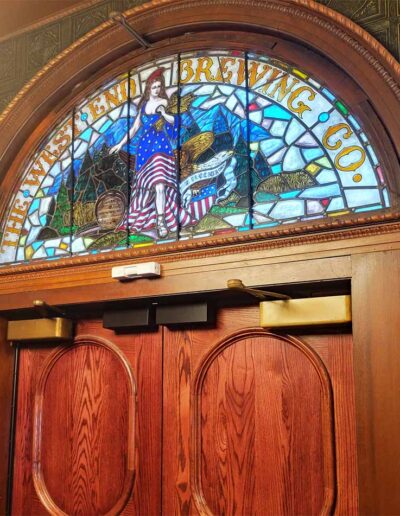 The building is peppered with historic details, including several awesome stained glass windows like this one over the store entrance. 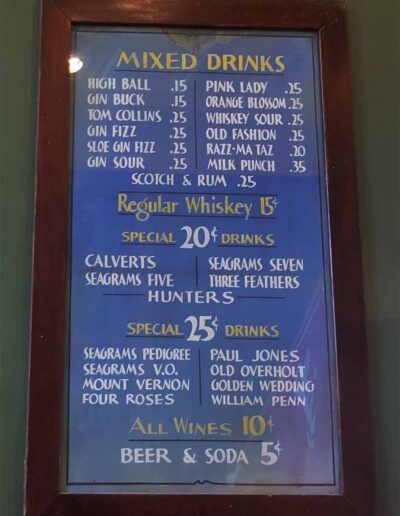 New cocktails were developed during Prohibition to soften the taste of rotgut liquor. My grandfather called every mixed drink a “High Ball.”

Vintage bottles showcase the tasty beverages made during Prohibition.

A stunning vintage label. The collar reads “A smile in Every Bottle.” 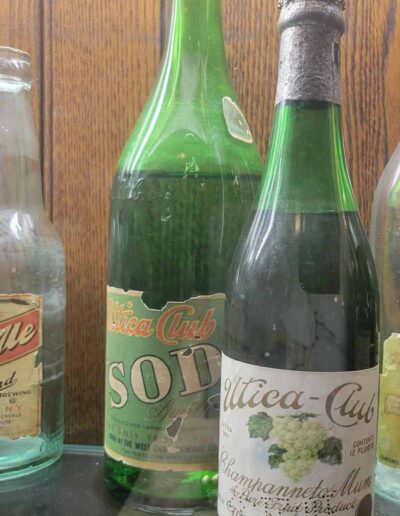 Champannetto Mum is such an awkward product name but probably chosen to remind drinker’s of the more famous Mumm’s champagne. 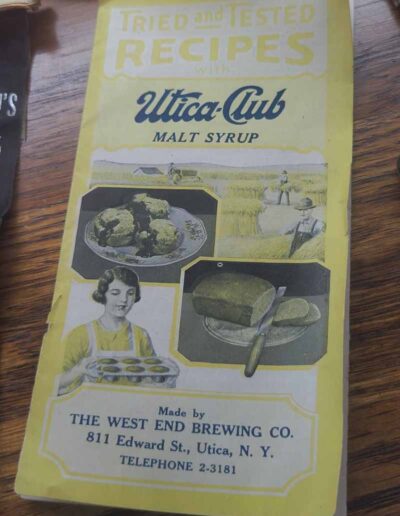 Ever wonder why no one cooks with malt syrup any more? 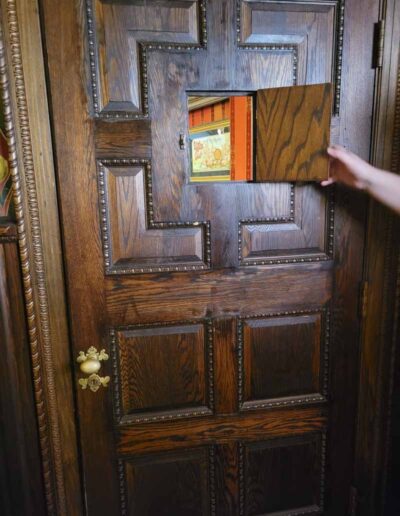 Is it a raid? Traditional speakeasy door

In a nod to the 1920’s the brewery’s “speakeasy” has a peephole door to keep out the riffraff and bar-busting cops. 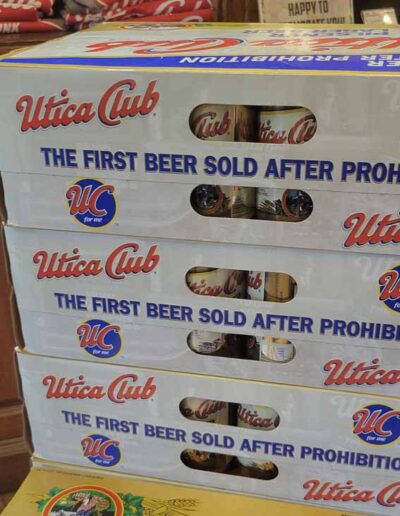 Utica Club is the first beer sold after Prohibition and wear its history with pride.

The brewery’s original copper kettles are a marvel. 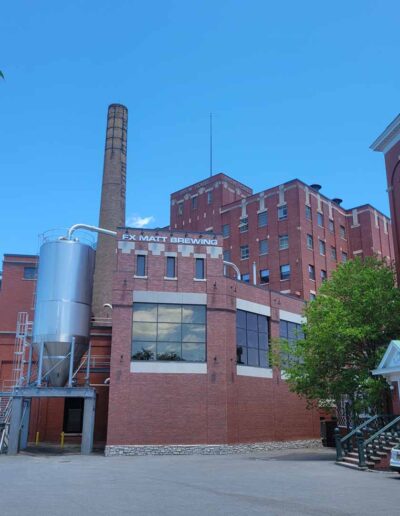 The modern side of the West End brewery. The tall boxy section in the background says BREW HOUSE just below the roofline. 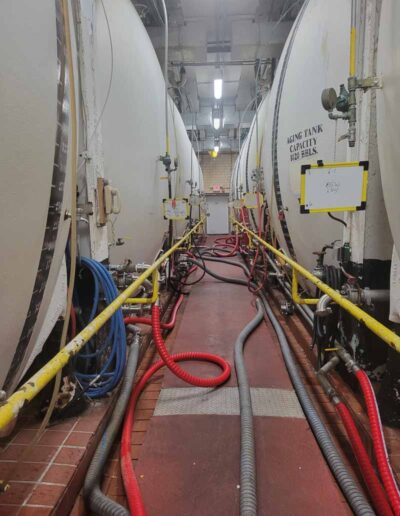 This room was HUGE and full of beer aging to perfection. 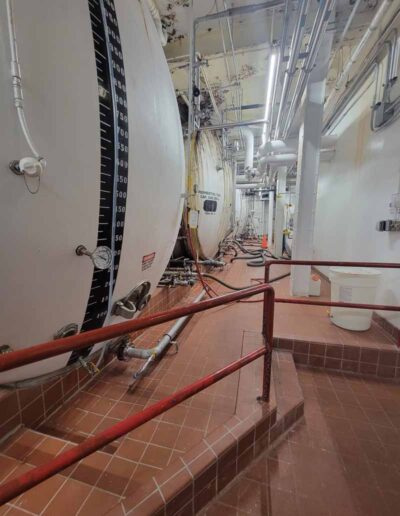 The tour was a walk through an industrial timeline. Also these tanks are HUGE.

Old meets new. In the middle of modern tanks, pipes, and storage rooms, vintage barrels are still being used for specialty brews. 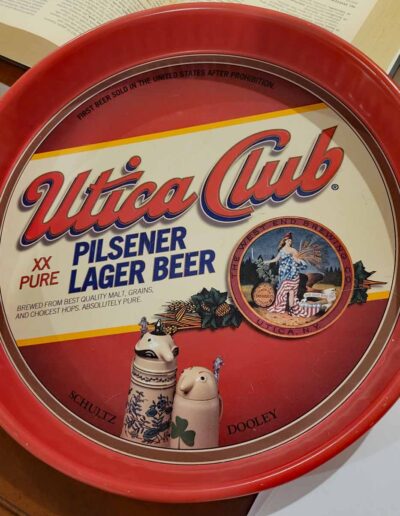 The Utica Club commercials featuring two talking beer steins named Schultz and Dooley were the height of early 1960’s advertising. Schultz was a Bavarian tankard with eyes, nose and a Prussian helmet. Dooley was a short, lidded earthenware mug with a green shamrock on front. 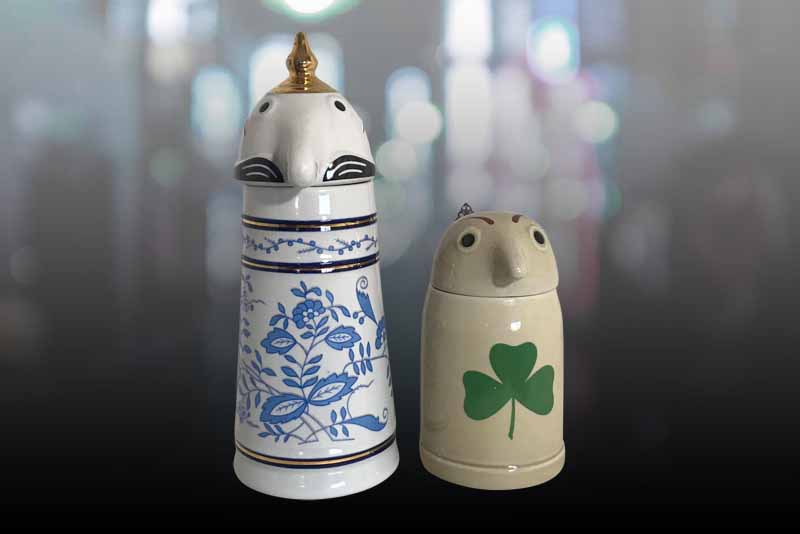 Comedian Jonathan Winters voiced both Schultz and Dooley. A puppet troupe made the steins move for the camera. Before he composed Broadway classic Man of La Mancha, Mitch Lee provided the music.

The commercials won a slew of awards, including first and second place in the 1960 Venice International Film Festival and a Clio Award for Best Television Commercial. The one below is why.

On a personal note, a big thank-you to tour guide Tom Wynne and to Steve Hamilton, the company’s Visitor Experience Supervisor. Not only is the brewery a fascinating place, but it’s also an event venue helping to revitalize the city of Utica.

I definitely caught the excitement! 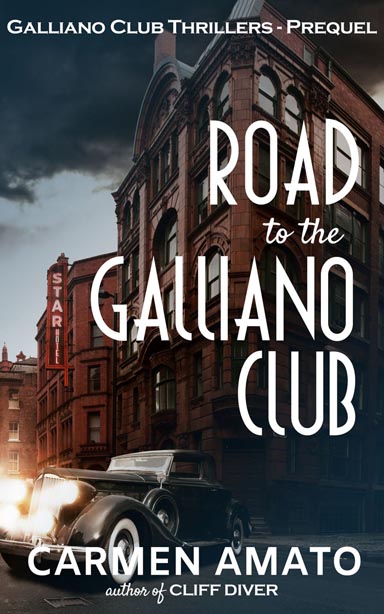 ROAD TO THE GALLIANO CLUB is available now.