ROAD TO THE GALLIANO CLUB, prequel to the Galliano Club historical thriller series, is available now in Kindle and paperback formats.

The Galliano Club historical thriller series has been in the works for over a year, with excerpts doled out in the Mystery Ahead newsletter every other Sunday, so it’s a fantastic feeling to finally share Book 1 with readers! The setting is Lido, New York, a small city in upstate New York, but before the three main characters arrive there, hard luck forces each to strike out on their own.

All journeys end at the Galliano Club, of course, where trouble has just begun. 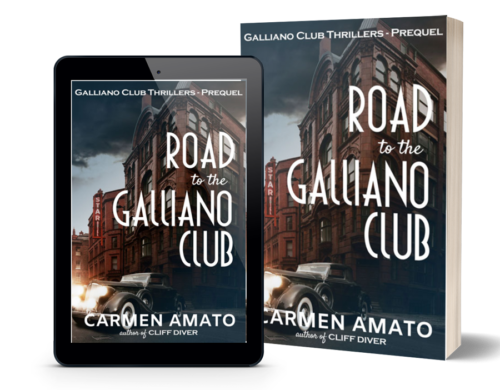 RUTH CROSS: After escaping a dead-end Pennsylvania coal mining town, Ruth fulfills her dreams of dancing on Broadway, but is tripped up by a ruined reputation and prison time. Opening a dancing school above the Galliano Club is key to reinventing her life, but can the club be the sanctuary she needs?

LUCA LOMBARDO: From a bitter upbringing in Italy to the heartbreaking death of his wife and child in a New York City tenement, Luca loses everything he’s ever cared about. The Galliano Club is the one exception. It’s the home he never had. Nothing and no one is going to take it away.

BENNY ROTOLO: A member of Chicago’s violent North Side gang, Benny learns how to succeed in the crime business until the day he’s chased out of town by Al Capone. Determined to build his own bootlegging empire, he wants to seize the Galliano Club and turn it into the finest speakeasy north of Manhattan. 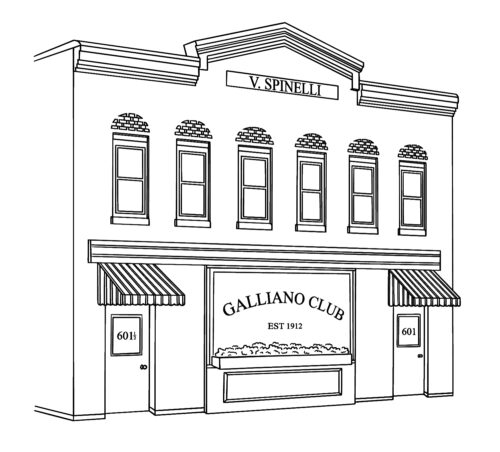 The Galliano Club anchors the growing Italian immigrant community in Lido, New York. After long days building America’s skyscrapers, ships, and electrical grid, thirsty mill workers head to the club to play cards, argue over the news, and drink the beer hidden in the cellar. It’s a comfortable place where no one is ready for the coming storm of murder, blackmail, and revenge.

This sketch of the building is a composite of buildings in the historically Italian section of my hometown of Rome, New York. Several bear the name of the owner/builder just below the roofline. V. Spinelli is Vito Spinelli, the owner of the Galliano Club series. He parks his Packard in the alley behind the building.

Vito’s taste for illegal whiskey, to help drown his grief at the loss of his son in World War I, means that all the work falls to Luca.

The door on the right is the club entrance. The door on the left opens directly to stairs leading up. Ruth’s apartment, as well as her school of dance, are on the second floor.

The architecture, similar to the layout of many duplex buildings in upstate New York, plays a role in how a deadly crime plays out in Book 2, MURDER AT THE GALLIANO CLUB.

America’s growing pains during the early 20th century provide a vibrant backdrop for the series. New immigrants file through Ellis Island as George M. Cohan lights up Broadway, Sacco and Vanzetti go on trial, women swoon over Rudolph Valentino’s The Sheik, Chicago gangsters shoot to kill, skyscrapers sprout from cement and sweat, and the first flight over the North Pole is celebrated around the world.

Researching the Galliano series was hugely satisfying. For example, I learned that there’s only 2 degrees of separation between me and Buster Keaton. His two sons were both in the OSS during World War II and I was in the CIA, the successor to the OSS.

There’s a personal connection to legendary Broadway performer, writer, and producer George M. Cohan, too.  I was in the musical George M! about Cohan’s life and still know all the words to Give My Regards to Broadway, so of course his shows launch dancer Ruth Cross on the ROAD TO THE GALLIANO CLUB.

Also I saw Donny Osmond in the revival of Cohan classic Little Johnny Jones but we’ll save that for a rainy day.

Get your copy of ROAD TO THE GALLIANO CLUB today! 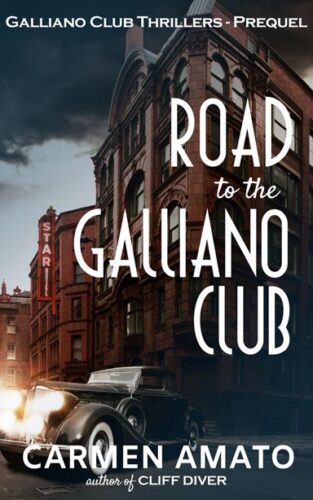