Louise Penny’s KINGDOM OF THE BLIND 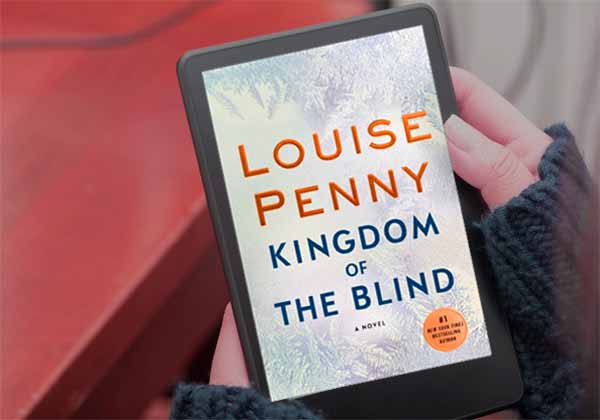 In Loise Penny’s latest Armand Gamache mystery, KINGDOM OF THE BLIND, the Canadian crime fighter has been suspended from his job as head of the Sureté, the top law enforcement agency in Canada’s French-speaking Quebec province. The storyline is a continuation of the previous book, GLASS HOUSES, in which Gamache lets known shipments of drugs slip into Quebec in order to follow the trail of a major drug kingpin.

Truth be told, as someone who writes about drug smuggling and cartel kingpins, I found the premise of GLASS HOUSES ludicrous and the ending painfully naïve. Most of the previous Gamache novels focused on art-related crime with deep dives into relationships, motive and psychology. KINGDOM OF THE BLIND returns to that winning formula, but cleans up the mess left by GLASS HOUSES.

Related post: Department Q and THE KEEPER OF LOST CAUSES

Gamache, awaiting the results of an official inquiry into his failed counterdrug actions,  is surprised to find out he’s been named executor of the estate of a woman he never met. Myrna, his neighbor in the tiny village of Three Pines, is also an executor as is a young builder from Montreal.  The unknown deceased was a cleaning lady who liked to be called “the Baroness.”  Her three children are surprised to have three strangers enter their lives in connection with their late mother’s will.

As Gamache pokes into the Baroness’s background, KINGDOM OF THE BLIND branches out in multiple page-turning directions. The Baroness was a descendant of a European industrialist whose fortune has been tied up in courts for more than a century. Who knew? Was it possible she was going to inherit? Gamache is sent spinning in yet another direction when the Baroness’s house collapses and one of her sons is found murdered.

At the same time, Gamache is tracking a cadet who was kicked out of the Sureté training academy for allegedly dealing drugs. The girl was once a crackhead and she immediately hits the streets in search of the carfentanil shipment which slipped through Gamache’s fingers in GLASS HOUSES. While Penny wants us to believe she’s gone back to her old ways, it wasn’t hard to guess that she is undercover.

While the drug scene excerpts were more believable this time around, the Three Pines cast of characters is what makes KINGDOM OF THE BLIND another Gamache winner. There are several epic meals, with everyone chiming in around the table in the bistro or someone’s home in the village, all talking over each other as they puzzle out murder, mayhem, and the strange legacy of the Baroness’s ancestors.

This is perfect “chorus of voices” writing. The dialogue crackles with insider jokes; each comment perfectly pitched to the speaker. The various personalities shine through, laced with humor and empathy. These scenes contain the best group dialogue I’ve ever read.

Someone asked a Facebook mystery group to name their favorite book setting and the response was a near unanimous “Three Pines.” Readers wanted to curl up in Olivier’s Bistro with a hot chocolate in the evening or enjoy café au lait and pancakes in the morning. KINGDOM OF THE BLIND does a wonderful and much-needed job of bringing us back to Three Pines for another memorable Gamache story.