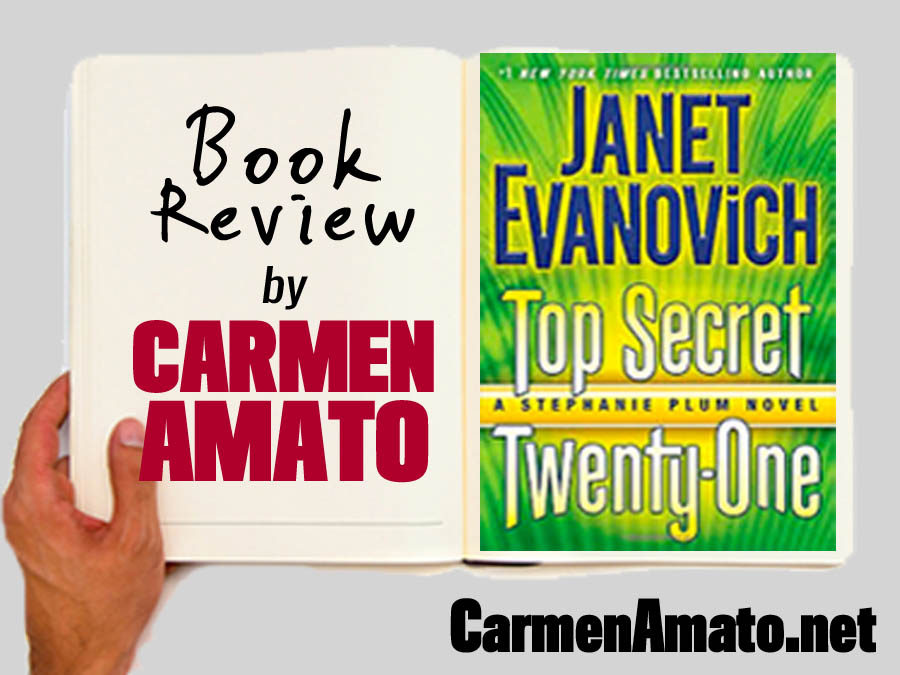 The Stephanie Plum books are like Pringle’s potato chips—I can’t eat just one despite the fact I know they’ll be full of empty calories. Maybe it’s the salt. Whatever. Pass the can.

Top Secret Twenty One is the latest in the Stephanie Plum bounty hunter series by Janet Evanovich set in Trenton, NJ. With 21 books in a series, frankly, it must be hard to keep things fresh–I’m up to 3 novels so far in the Emilia Cruz series so am not speaking from experience. That being said, having read 1-20, I was pretty sure what to expect.

No crystal ball needed for this book review.

In “21,” Stephanie is still caught between Morelli, the Italian cop she’s sleeping with, and Ranger, the mysterious Latino god-cum-security-expert she’d like to be sleeping with. Ranger is always available to lend Stephanie a car or get her out of trouble, which is amazing as he’s not getting any.

Basically he’s the hottest, yet most unfulfilled, man on the planet . . . Babe.

Related: Learn how to write a book review that matters!

The novel has Stephanie hunting for a bail jumper named Jimmy Poletti who was arrested for running girls out of his car dealership. She can’t find Poletti but when a frenemy shows up at her door claiming that Poletti is trying to kill him (Randy the uber-short in a recurring role), Stephanie figures the odds have changed in her favor.

There’s the obligatory scene at the funeral home, her mother still drinks and irons when stressed, Grandma Mazur and Lula take turns at being the inept sidekick, Ranger’s invitation remains open-ended, and there are more run-ins with the bad dudes on Stark Street. The formula is familiar but still works, although the chapter endings in this novel seemed flat as opposed to the cliff-hangers Evanovich normally leaves us with. The dialogue wasn’t as snappy, either, like soda that has lost some of the fizz.

Doesn’t matter. I’ll read “22,” sure that it will be the one in which Stephanie finally chooses between Morelli and Ranger. Or maybe that will happen in “23.” Or “24.”

← One Heart, Three Tragedies The Year We Made a Difference for Water.org →