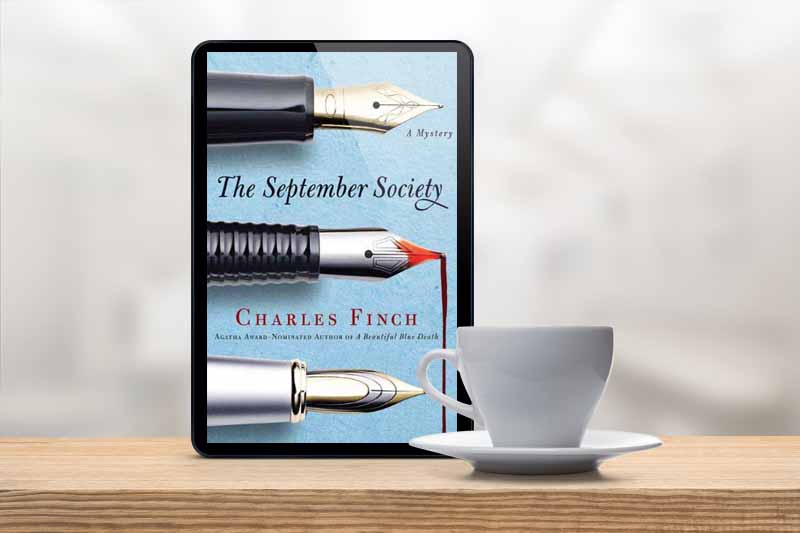 THE SEPTEMBER SOCIETY by Charles Finch

THE SEPTEMBER SOCIETY is one of the early novels in the Charles Lenox historical mystery series, which is my new obsession. Imagine Victorian London through the eyes of an upper-class private detective, with great descriptions, 3-D characters and details out of a Dickens novel. As an added delight, there are sly references to iconic British authors like P.G. Wodehouse.

In short, the Charles Lenox mystery series is absorbing, authentic, and quite sophisticated.

Lenox is a bachelor in love with his London neighbor, Lady Jane, a wealthy widow whom he’s known since childhood. Asking for her hand in marriage requires courage, although Lenox is accustomed to not only solving gruesome crimes but the rigors of London society and the opinions of those who believe that an Oxford-educated man should do something more impressive with his talents. Be in Parliament, perhaps, like his older brother and many friends.

Independently wealthy, Lenox persists in his role as amateur detective. In THE SEPTEMBER SOCIETY, a woman needs his help to find her son, missing from college at Oxford. Pleased to revisit old haunts, Lenox finds a connection to a London club called the September Society.

Only a handful of men belong to the club, which is exclusive to the point of anonymity. All members have links to the Army and to an obscure battle that provides a lesson into British colonial history.

The descriptions of both London and Oxford are brilliant. The architecture, traditions, and landscape of Oxford is particularly well done as we explore the alleys and greens. Weathered stone and damp grass are underfoot, while wavy windows and spires rise above. Student life ranges between tutors, taverns, and games.

The plot races along as Lenox chases clues. The climax is a very satisfying surprise.

At this point, I’ve read 7 out of 14 Charles Lenox mysteries, which are best read in order. Lenox’s evolving life—marriage, children, a stint in Parliament, his own detective agency—features prominently. The books are fairly long and immersive, reminding me in style and tone of Anne Perry’s early William Monk historical mysteries.

I’m off to find the next in the series!

Find THE SEPTEMBER SOCIETY on Amazon