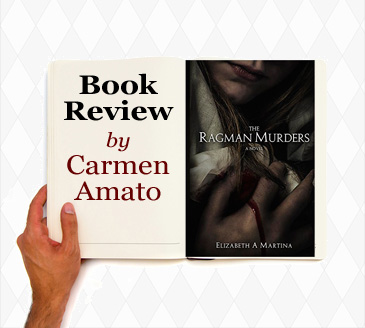 Based on a true family story, THE RAGMAN MURDERS is clearly a labor of love. The novel tells the story of two immigrant families, the Amatos and the Tassones, and the circumstances that bring them into conflict within Hartford CT’s teeming immigrant neighborhoods in the early 1900’s. I read it at the same time that PBS brought out its documentary “The Italian-Americas,” and the descriptions in RAGMAN resonated deeply.

RAGMAN’s action moves between an interview with one of the grown daughters of Maria Carmella and Guiseppe Amato, and flashbacks of the Amatos’ immigration experience from Serra San Bruno, Italy. Other flashbacks show Guiseppe’s involvement with the Black Hand gangsters that preyed on newly arrived fellow Italians, and the story of the tragedy-prone Tassones. While the back-and-forth narrative is well explained, the construction would have been tighter if there had been more of the storytelling daughter in the flashback sequences, perhaps showing that she and the father had a special relationship. That would have also justified the plot twist (no spoilers!) at the end.

That point notwithstanding, RAGMAN is a piece of the Italian-American immigrant experience. It is based on true events and has so many characters because all of them actually took part in those events. News stories no doubt shaped some of the narrative, and lend a period writing style to the last fourth of the book. Highly recommended for those who are interested in the history of Italian-Americans and Italian immigration to the US.

AWAKENING MACBETH is a serialized novel of romantic suspense by Carmen Amato. Episodes are released on carmenamato.net, Pinterest, and Facebook on Tuesdays and Fridays. Carmen’s other novels are available on Amazon and include THE HIDDEN LIGHT OF MEXICO CITY as well as the Detective Emilia Cruz mysteries CLIFF DIVER, HAT DANCE, and DIABLO NIGHTS. Please use the link below to sign up for the Mystery Monthly mailing list for exclusive excerpts, book release news, and sales alerts.