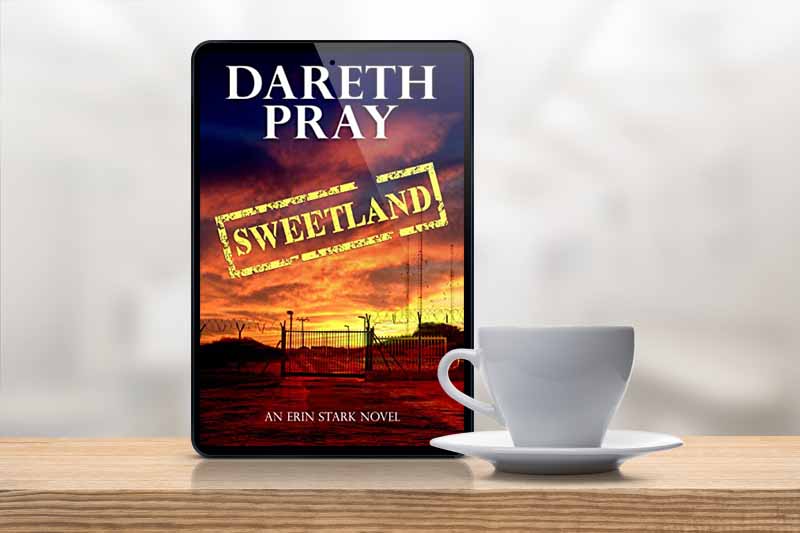 Debut thriller SWEETLAND takes off like a rocket and never loses speed. Author Dareth Pray is one to watch!

Erin Stark is a new kind of female thriller heroine, giving fictional male colleagues like James Reece (THE TERMINAL LIST) and Jack Reacher (BETTER OFF DEAD) a run for their money. Reminiscent of Lisbeth Salander in THE GIRL WITH THE DRAGON TATTOO, Erin has a cold-blooded capacity that makes her both uncommon and intriguing.

A jingoistic cult/militia group called Patriot Dawn kidnaps a busload of high school cheerleaders from a highway rest stop in Tennessee. Erin poses as a college student to be scooped up along with the cheerleaders. In the process, she saves a girl having an asthma attack. In short order we see that Erin has special skills as well as a cool head under pressure.

The group is taken to an abandoned US military base commandeered by Patriot Dawn. Fake marriages take place. Erin ends up with the group’s commanding officer, an ex-military officer who served in both Iraq and Afghanistan. The Ruby Ridge/Jonestown nature of the Patriot Dawn compound and the forceful leader’s rules and authority are chillingly well drawn.

SWEETLAND really turns on Erin’s inner voice as she endures the horrific ordeal yet presses her own agenda. With no choice but to submit, she subtly manipulates her new “husband” to gain his trust and reveal his plans. She creates imaginative codes to records her findings.

Erin’s backstory, including her skill with languages and the spy handler who introduced her to the world of espionage, is carefully threaded through the current timeline. We realize that there is little in her life apart from constant undercover work.

Meanwhile, back in Washington DC, a weak-willed US president and a general called out of retirement learn that Patriot Dawn is the tip of a very large iceberg that threatens to propel the US into civil war. How long before the government is forced to respond? What critical information can Erin collect—and how much can she endure—before war breaks out?

I have it on good authority that more Erin Stark books are in process. Highly recommended.