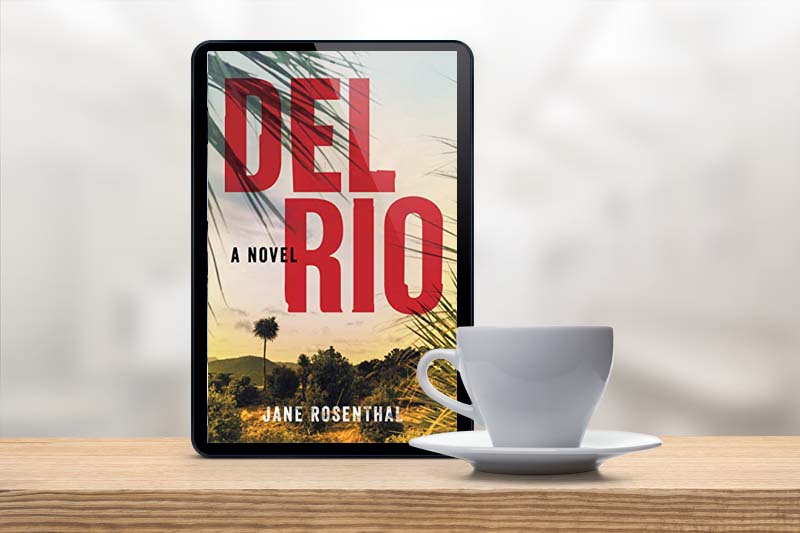 Jane Rosenthal joins the small but vital community of authors using fiction to reveal the complexity and heartbreak of the US-Mexico relationship. DEL RIO confronts the issues of human trafficking and migrant labor and delivers a compelling story rooted in empathy and authenticity.

Del Rio, California, has fallen on hard times, thanks to cartels on the other wide of the US-Mexico border. Hometown girl Callie McCall is now the local district attorney, a tough cookie aiming for higher political office.

A dismembered teen is found on the edge of a citrus grove. It’s on Callie’s watch and she shoulders the responsibility. The case sends Callie deep into Mexico, pursuing facts no one wants exposed, least of all her own landowning family and devious ex-husband.

She’ll get unexpected help from Nathan, a widower who has been tricked into working as a tour guide to provide cover for a cartel boss. Together, they survive a gruesome “warning” in the form of mangled bodies and begin to unravel a complex tangle of money and crime.

The thriller moves between Callie’s first-person point of view and Nathan’s narrative, allowing the intricate plot to unfold without confusion. Callie’s family is a big part of the trouble and having her chapters tell it directly is a clever device.

I really liked the character development throughout the book. Both Callie and Nathan learn troubling but impactful lessons about themselves. Callie’s ambition and Nathan’s self-pity are cast off as they encounter drugs, murder, and human smuggling and we like them all the better for it. A supporting cast of secondary characters pop with authentic descriptions and plot-twisting tricks.

The scope of the story, breadth of character motives, and clever narrative style resonate long after the last page is turned. This is such a timely book.

Get DEL RIO on Amazon