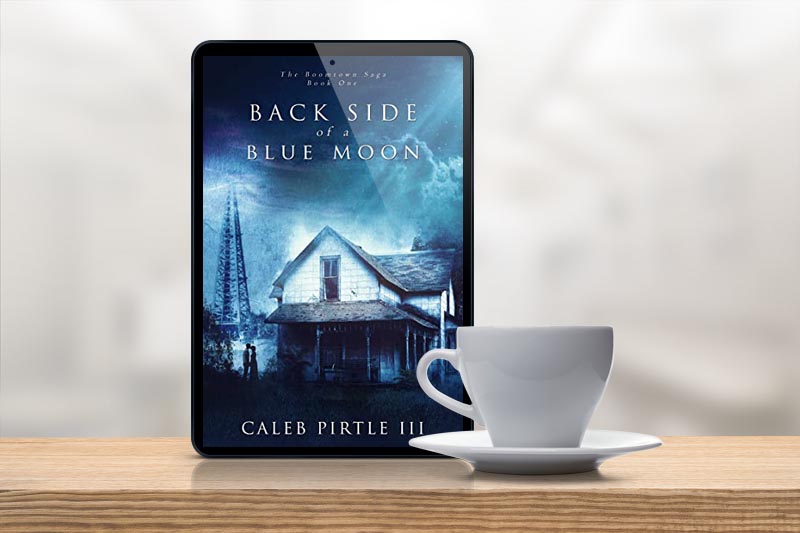 I’ve been roaming Amazon, looking for historical fiction set in the blue collar world of the 1920’s and 30’s and won the prize when I discovered BACK SIDE OF A BLUE MOON, the first book in Caleb Pirtle’s Boomtown Saga trilogy. Part Music Man, part Grapes of Wrath, beautiful, haunting prose paints a tale you can see as well as if it was on the big screen.

And what a story it is!

The Depression and drought have combined to kill Ashland, Texas. The town on the banks of the Sabine River in east Texas is worn out and no one is as worn out as Eudora Durant. Once the town beauty, she’s now married to an abusive husband and stuck on a farm that can no longer sustain them. Her neighbors are selling off and leaving, their lives destroyed.

One night Eudora’s husband goes too far and she defends herself with the shotgun. When he isn’t seen around for some time, the sheriff starts asking questions, as do the townspeople. Eudora claims he took off but suspicion grows.

Good riddance to bad rubbish, as the saying goes. But where is his body? Without it, the sheriff can’t arrest Eudora, no matter what the gossips say.

Meanwhile, Doc Bannister comes to town, one step ahead of the law. He’s Hugh Jackman in the Music Man but instead of promising a boy’s band complete with uniforms and instruments, he’s going to use a homemade “doodlebug” machine to find oil and make Ashland richer than King Midas.

Doc is one of the best-written characters I’ve come across in quite some time. In his white suit and straw hat, he’s a breath of fresh air blowing life back into Ashland. He’s a rogue, yet a hard worker. Slippery yet drawn to the concept of stability. He knows just how to convince and manipulate while appearing honest and sincere.

In short order, he convinces everyone to part with their last two nickels to invest in his oil syndicate. Doc starts drilling on Eudora’s land, claiming to “smell” the oil below the surface, as the sheriff prowls around.

The suspense is multi-faceted. Is Doc a con artist or does he really know what he’s doing? Did Eudora really kill her husband? Will she be charged? What is going to happen to everyone who invested?

Perfectly true to time and place, the book veers more toward literary fiction than traditional mystery but it was too good to keep to myself!

It’s only available in Kindle format on AMAZON.