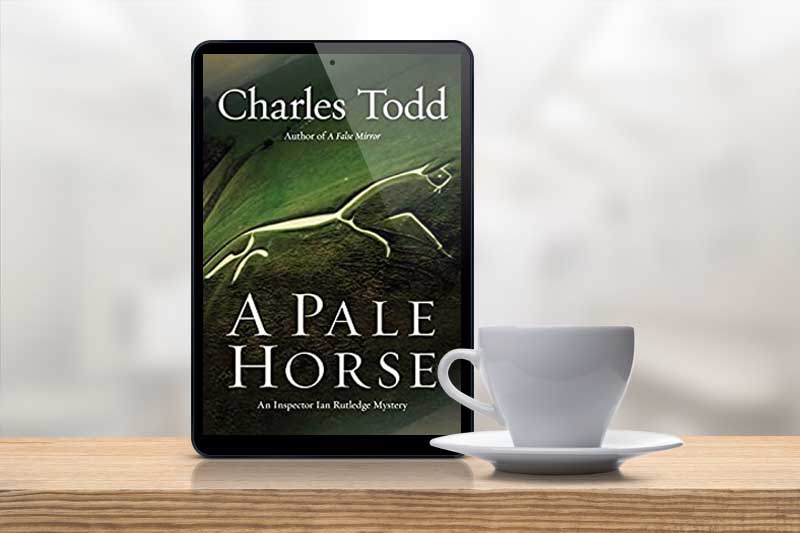 I’ve been gobbling up the Inspector Ian Rutledge historical mystery series by Charles Todd and A PALE HORSE is a prime example of what makes this post-WWI series so irresistible. You get a travelogue of Great Britain, layers of plot complexity, and a flawed hero who lives on the edge of madness caused by bloody and senseless war.

It’s 1920 and Rutledge is an inspector with Scotland Yard with jurisdiction to investigate across Britain. His first case is an unidentified body wearing a theatrical cloak and a war-time gas mask, found in the ruins of an abbey in Yorkshire. Having spent 4 years as an officer in the trenches of France, Rutledge is somewhat of a ruin himself.

He hears the Scottish voice of his dead sergeant Hamish, a voice so real that he cannot turn around for fear of actually seeing the man. Hamish was executed by firing squad for refusing to lead his men in another suicidal charge through no-man’s land. As the officer in charge, it was up to Rutledge to deliver the final shot. Moments after doing so, a German mortar attack killed everyone in the trench except Rutledge who was shielded when Hamish’s dead body fell on him.

The mystery of the unidentified body in Yorkshire soon merges with that of a missing Berkshire scientist who lived in a small cluster of cottages built near the mysterious silhouette of a horse cut into a chalk hill by ancient people. As Rutledge probes the disappearance, each of the other residents of this strange little community reveal their secrets. Soon Rutledge isn’t just trying to identify the dead or find the missing but solve multiple murders.

I’m always fascinated by plot construction and the Rutledge books follow a 3-act template. Act 1 is all about setting the scene and the pace is measured. Things pick up in Act 2, but Rutledge frequently revisits locations or questions the same people again and again, uncommon technique for a mystery author. The pace is fastest in Act 3 as clues lead to a major climax.

Throughout it all, Rutledge and Hamish debate the cases and taunt each other. Thanks to some of the best writing out there, we see how Hamish is a product of Rutledge’s troubled conscience. Here’s an example from A PALE HORSE, as Rutledge contemplates a lost love:

Hamish, at his shoulder, said only, “It was verra’ different with my Fiona. I should ha’ come home to her, and left you dead in France. Your Jean wouldna’ have missed you . . .”

The voice was sad, as if half convincing himself that this was true.

Together the two men, one of whom didn’t exist, went back to the flat.