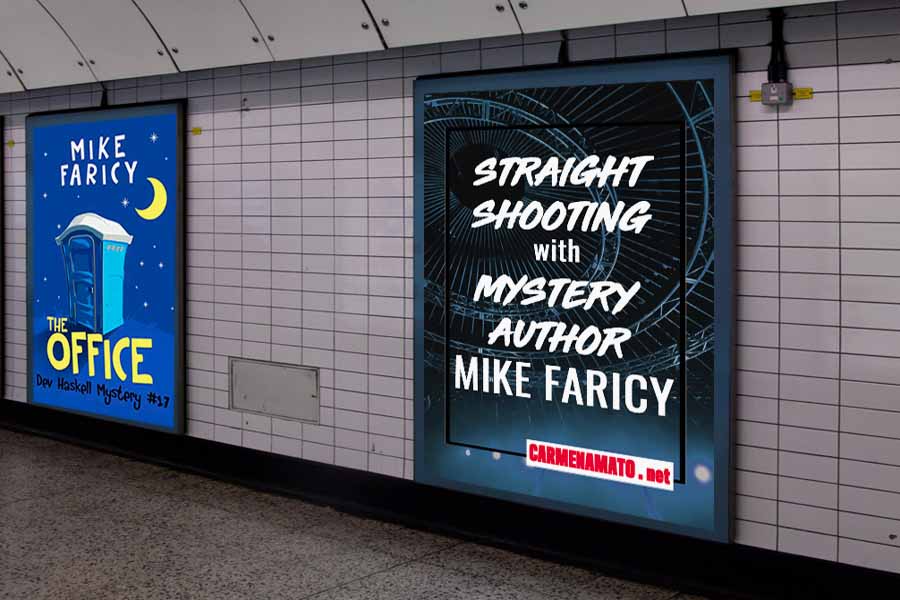 I just finished THE OFFICE, the 17th entry in Mike Faricy’s addictive Dev Haskell series and immediately scooped up his Dev Haskell boxed set. The books are like Pringle’s chips–you can’t read just one. In this chat, which originally appeared in my Mystery Ahead newsletter, Mike shares the secret of his writing success.

1  Carmen Amato: Mike, thanks so much for stopping by. Your wonderful Dev Haskell series is a briskly-paced PI series with a main character whose inner voice channels Robert B. Parker’s Spenser. Tell us how Dev came to be and the type of cases he handles.

Mike Faricy: Thank you for having me, Carmen. It’s great to be here. Over the years I wrote maybe fifty or a hundred, no doubt award winning, first chapters. Then one day I had a unique thought, maybe finish one of these or stop wasting your time, so I wrote Russian Roulette, the first book in the Dev Haskell series.

I’m a voracious reader and when I land on an author I like, I inhale just about all of their work, Robert B. Parker, Elmore Leonard, Carl Hiaasen, Stuart MacBride, Ian Rankin along with a number of others. I had a ton of ideas bouncing around in my thick skull, and once I finished Russian Roulette I thought I can write another book with this character. Suddenly, I’ve had a series going and it just keeps coming.

One of the things that surprised me was I initially wrote Dev Haskell with a guy like me in mind as my reader. Almost immediately I started getting emails and messages from women telling me how much they enjoyed the books. One woman said she would love a wild, getaway weekend with Dev, but you wouldn’t tell your girlfriends about it for at least ten years, and then, when you did, one of them would say, “I did that, too.”

Dev ends up with all sorts of women who think; you know with a little work I could maybe fix this guy. Of course, by the end of the book they’re telling him to never, ever contact them again. I think there’s a couple of restraining orders out there on him. The most recent work in the Dev Haskell series is The Office. 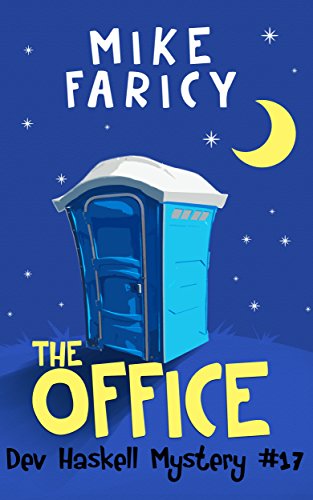 2  CA: Dev’s world is populated with a great cast of multi-dimensional secondary characters who both help and hinder Dev. Where do you look for inspiration when creating characters?

MF: I look no further than real life. In all actuality some of the crazier characters are based on people I know, things that they’ve done, good and bad. What’s the line? Truth is stranger than fiction. I’ve found that to be pretty accurate. In a lot of my reading, things get so unbelievable. Some special forces guy jumps out of a plane using his raincoat as a parachute and lands on the roof of the White House to save the president.

Dev is involved more or less in day to day sorts of situations. He’s not saving the world from terrorists or stopping an international banking scandal. All my books are based on the sorts of people we all know. Maybe that slightly different kid you knew in grade school, you haven’t see in thirty years and you wonder what ever happened to them. You also don’t want to get too close, but you’re still curious. Often there is a history of bad decisions, or they were just plain lucky, but believe they’re suddenly smarter than the rest of us.

Plus, no matter what’s going on in your world, you read Dev and well, you figure, you don’t look so bad after all.

3  CA: Dev seems to date a different woman in every book! If you were his wingman, how would you introduce him in a bar?

MF: Carefully. He would be the perfect gentleman, or try to be, but in the end things always go the wrong way. He’s basically a nice guy. He’d help with a project, maybe paint a room, be kind to a child, bring you flowers or chocolate, maybe take you out to dinner where some crazy thing would no doubt happen, but in the end, he’s Dev Haskell. It’s just not going to work.

He has a ‘friend with benefits’ relationship with Heidi Bauer, but she regularly can’t see him because she’s with another guy or she’s still mad at him for whatever stupid thing he recently did. After a while women seem to wisely decide that, you know, this just isn’t working for me and they move on.

I had a scene where Dev’s cooking breakfast for a woman who spent the night after a romantic dinner and the toaster suddenly starts smoking. Turns out a mouse had been in the toaster and at that point, she’s getting dressed and hurrying out to her car never to set foot in his place again. That pretty much sums it up. That also really happened to a pal of mine, the mouse in the toaster, but that’s another story.

4  CA: How do you use setting to create and build suspense?

MF: Setting is really important, but I’ve always taken the advice of Elmore Leonard which basically said, keep it short. A line or two, not paragraphs, and don’t dwell on the weather. If you describe a smell and a weeks worth of advertising circulars and past due bills on the coffee table that sets the scene. Or, if it’s a tense situation and the individual can hear their heart pounding, it’s late at night and the stair creaks, that conveys quite a bit. I use the KISS adage, Keep It Simple Stupid. 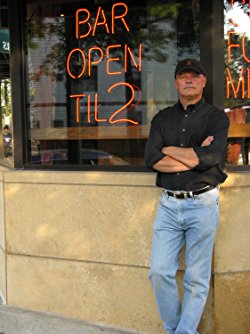 MF: Elmore Leonard is the guest and I’d probably be serving a crock pot meal with ciabatta bread and plenty of wine. Something like white chicken chili or a stew, only because I wouldn’t want to be distracted in the kitchen. We’d have hors d’oeuvres, beverages and a wine with dinner. And a dessert, I love desserts along with a small plate of nice chocolates.

We’d talk about plot, characters, general information and also our failures. A highly successful author once told me that we all have a work that we keep under the bed. Something we slaved over and at the end, it just didn’t work. It’s always inspiring to learn how much everyone stumbles, and falls. Then, the successful people get up, dust themselves off and keep moving forward.

6  CA: Can you leave us with a quote, a place, or a concept from a book that inspired you?

MF: Here’s a quote that fits me perfectly. “Well, you give me too much credit for foresight and planning. I haven’t got a clue what the hell I’m doing.”  Robert B. Parker

Thank you so much for the opportunity, wishing you and everyone out there, all the very best.

More about Mike: Mike Faricy lives in St. Paul, Minnesota and Dublin, Ireland. He writes crime fiction, the Dev Haskell series and the Hotshots series are written under his name, the Corridor Man series under the pen name Nick James, and the Jack Dillon series under the pen name Patrick Emmett. His latest work of genius is the first in the Hotshots series, Reduced Ransom!.

END_OF_DOCUMENT_TOKEN_TO_BE_REPLACED 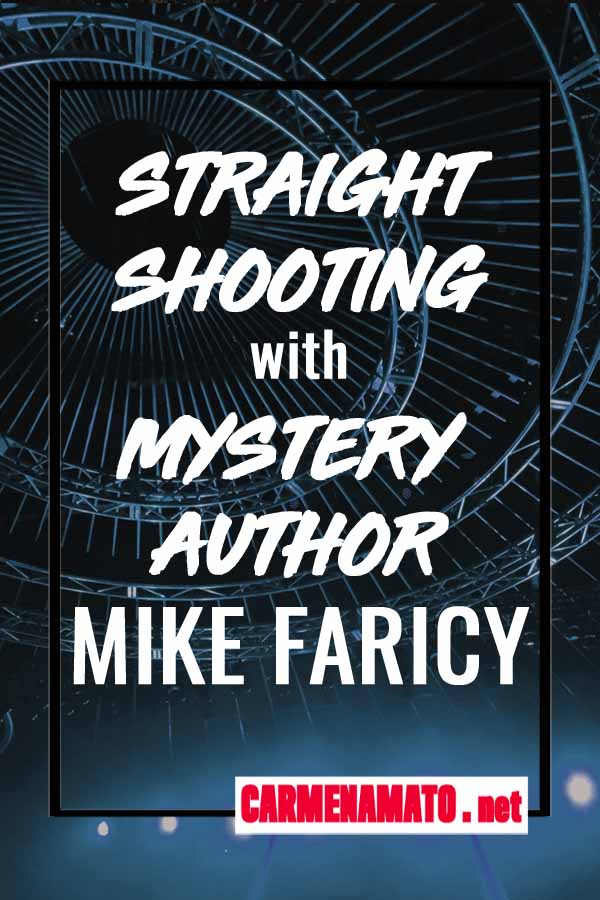