Padre Pro, the Catholic Martyr Who Inspired a Mystery

The long road that has become DIABLO NIGHTS, the 3th Emilia Cruz mystery novel, started nearly 4 years ago, in Rome, Italy. I’d had my tour of the Vatican and was now on the hunt for gifts and souvenirs. A large Catholic gift and bookstore looked promising.

On the second floor I found a small paperback entitled MEXICAN MARTYRDOM by Wilfred Parsons, S.J. The author name’s name was buried in the text on the back cover which told of “true stories of the persecutions” and the “atrocities of those times” and the “heroic resistance of Mexican Catholics” in the 1920’s.

I was astounded. I’d lived in Mexico for 3 years, gone to church on a regular basis, even been president of the parish council. It was certainly a more devout country than the US, with no hint of anti-Catholicism. Perhaps I should have been aware about this period in history during a tour of Oaxaca, when the guide had referred to government seizure of the former convent were were touring, but I was too agog with the loveliness of Oaxaca to give it further thought. But in the late 1920’s the Mexican government of President Plutarco Calles tried to outlaw the Catholic Church, provoking what became known as the Cristero War. 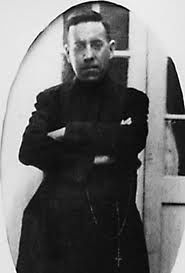 A rare photo of Padre Pro in a cassock in Mexico (vestments were against the law) from catholicglasses.com

From MEXICAN MARTYRDOM I learned the the story of Miguel Pro Juarez, S.J., a Jesuit priest executed for practicing his faith in 1927. Padre Pro, as he was called, was born in Mexico, ordained in Belgium, and returned to Mexico at the height of the crackdown on the Church. Wearing disguises, he walked, bicycled, and took taxis to dispense the sacraments and assist the poor–often by finding homes for unwanted babies and distributing food to those displaced by the government’s crackdown and mishandling of the economy. His legend grew large as the priest the army couldn’t catch but he was finally snared when he was accused of an plot to kill the head of the army (later president) and ratted out, along with 2 of his brothers. No one ever produced any evidence that the Pro brothers were involved in the plot.

Padre Pro and his brother Humberto were executed by firing squad. To make an example of him, the government took plenty of pictures during the event. But it backfired. Padre Pro blessed the head of the firing squad, forgave him, then flung out his arms, holding a cross in one hand and a rosary in the other, and shouted Viva Cristo Rey, just before the bullets struck. His words became the rallying cry for the Cristero War, which was captured in the movie “For Greater Glory.” Padre Pro was beatified by the Vatican in 1988 (first step on the road to sainthood).

Although the Emilia Cruz series is set in today’s Acapulco, I wanted to draw on Padre Pro’s life story for a novel. When things can get rough for Acapulco detective Emilia Cruz  in both CLIFF DIVER and HAT DANCE she turns to her parish priest Padre Ricardo for advice and solace. In DIABLO NIGHTS, she’ll find a relic supposedly from Padre Pro that gives her hope and the courage to keep moving forward. She needs her faith to survive Mexico’s drug war violence, but she also needs the relic as a means to ease her conscience, because  . . .

No spoilers today, but DIABLO NIGHTS is shaping up to be the most psychologically suspenseful Emilia Cruz mystery yet.

In Padre Pro’s Own Words

Padre Pro was a man of many talents. He played the guitar, sang, wrote stories and poetry, and was a great comedic actor (which enabled him to assume many disguises and improvise his way out of numerous close shaves with the Mexican authorities before he was finally caught.) A poem included in the biography BLESSED MIGUEL PRO by Ann Ball has a haunting stanza that I received permission to use as the opening quote in DIABLO NIGHTS:

The very breath of Hell floats in the air;

The cup of crime is filled by tyrant’s hand

END_OF_DOCUMENT_TOKEN_TO_BE_REPLACED 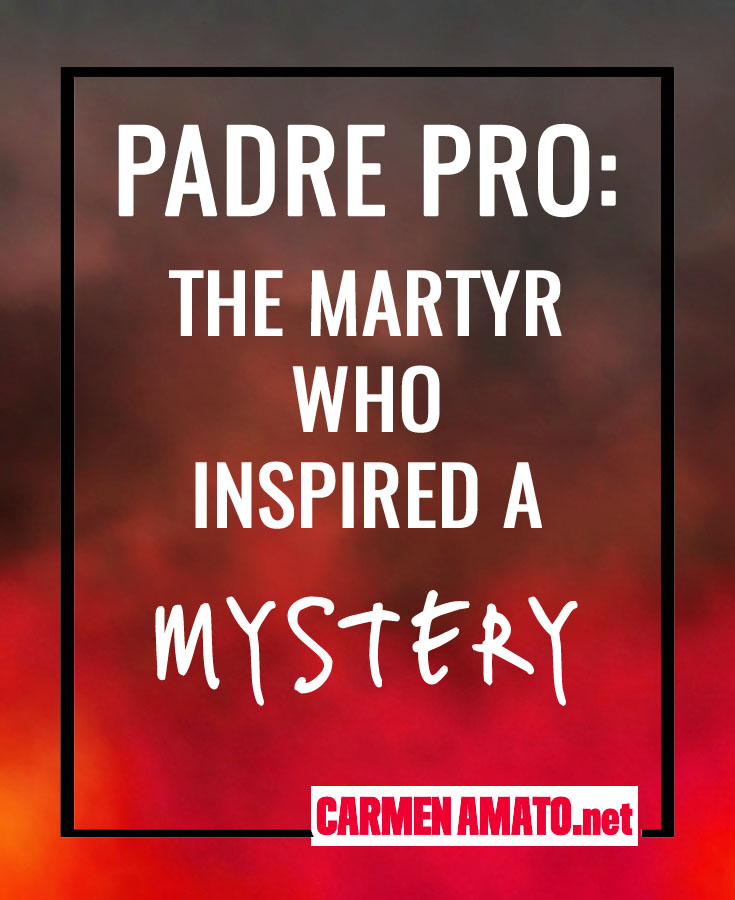