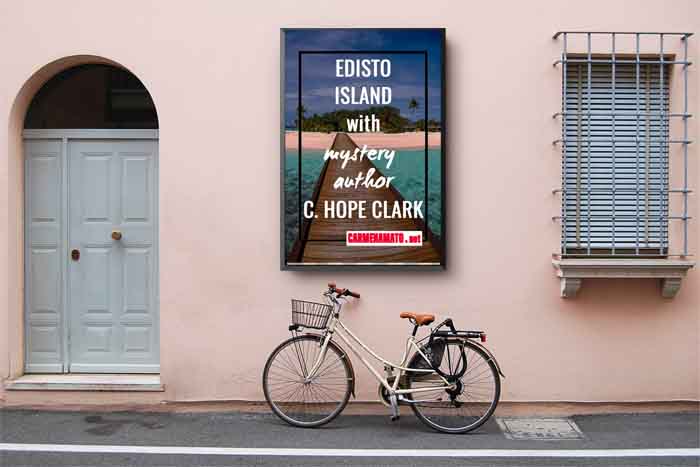 C. Hope Clark authors the Edisto Island mystery series as well as FundsforWriters.com, an award-winning resource for career writers. She lives on a lake where she spins mysteries with her ex-federal agent husband. Edisto Stranger is her latest tale, the fourth in the Edisto Island Mysteries, about an ex-Boston detective fighting loss and gin in paradise while solving the death of a retired FBI agent on a cold case hunt. See more at  www.chopeclark.com

1 Carmen Amato: Hope, thanks so much for stopping by. Many of my fellow authors probably know you from your essential Funds for Writers newsletter, but you’re also a mystery author! I especially want to talk about your series set on South Carolina’s Edisto Island, southwest of Charleston. Tell us how you came to write the absorbing Edisto series.

Hope Clark: Thanks for having me! Yes, Funds for Writers usually opens the door of writing conferences and such, but I am extremely proud and in love with my mysteries. Weird enough, the Edisto series was actually force-fed to me. After publishing three books in my original Carolina Slade mystery series, my publisher asked me to diversify. 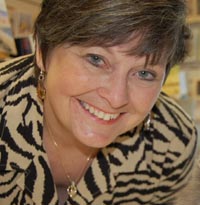 I’d planned on being the Sue Grafton of South Carolina mysteries, spending my career in one series. But my publisher pushed on and gave me three parameters: a woman in law enforcement, good old Southern family angst, and a South Carolina setting that could last through a series. The family angst was easy enough. I would walk and talk that one! LOL A woman in law enforcement was manageable since I was married to a federal agent.

But the setting took me a while. One single place that could prove romantic, striking, and luring. Then it hit me . . . Edisto Beach. It’s my favorite SC beach and where I escape to clear my head. From there the story came together, and I’m so thankful my publisher pushed so hard. I grew up in this state, have worked it from border to border in my previous federal job, and I understood its soul. Edisto was a different flavor from the Charleston, Myrtle Beach and Hilton Head areas most outsiders know. And I wanted to capitalize on its mystique. God, I love that place.

2 CA: Your lead character Callie Jean Morgan is a widowed single mom in law enforcement, with a love-hate relationship with gin. She often has a personal connection to the mystery. Tell us about creating Callie and how she has evolved over the course of the series.

CHC:  Faced with a new series and the creation of a fresh character, I had to come up someone totally unlike my other protagonist in the other series, Carolina Slade. Callie Jean Morgan is more serious, more professional, but also more damaged and flawed. I wanted to write a character who made me angry, and made me cry. I’ve done it all though her while writing in the wee hours of the morning. I gave her pneumonia when I had bronchitis, so I could feel the suffocation. I’ve even written her after I’ve had a few drinks, to sense her frustration with gin.

When my publisher asked for family angst and issues, I gave it to them in spades via Callie. Her demons are many from the loss of a husband to the loss of her career, with her constantly fighting to maintain self-respect and the respect of those around her. She rides that line when it comes to alcoholism. 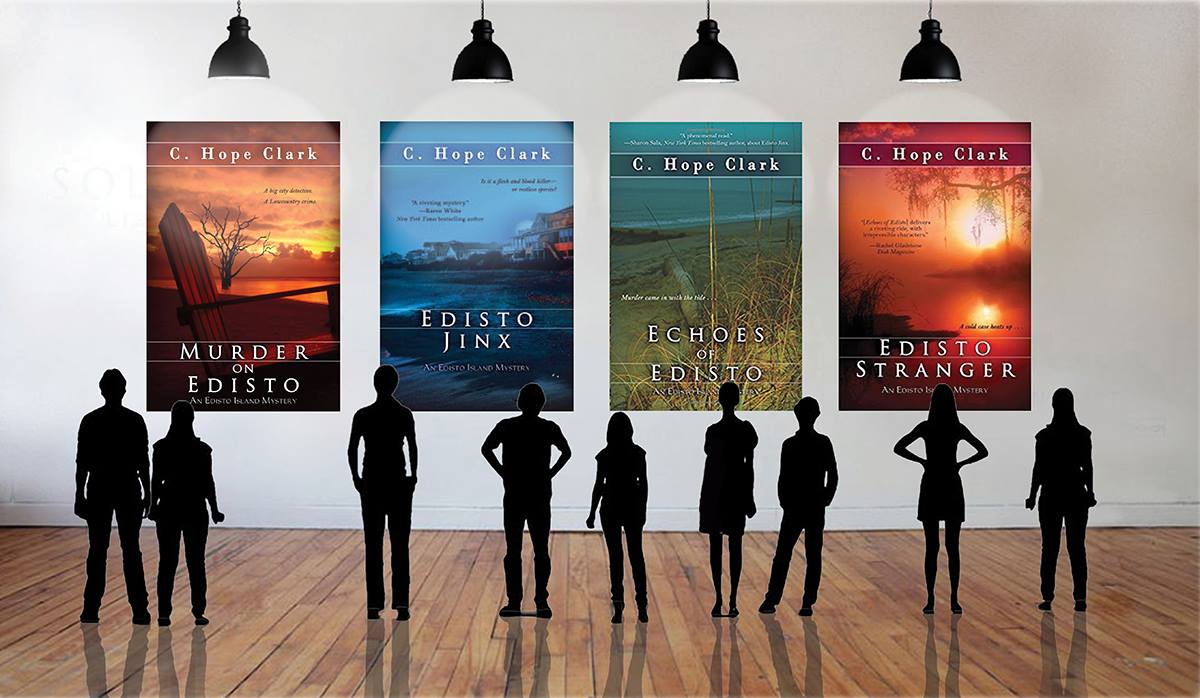 I didn’t want this series to be a cozy, and I wanted the reader to feel her pain. She slowly evolved in the series from being completely broken to gradually finding her footing, not that I don’t knock her feet out from under her every few chapters. She is growing; you can feel it. Inch by inch she is rebuilding who she is, and it isn’t what she was when she was at the height of her detective career with the perfect US Marshal husband back in Boston.

She’s constantly humbled, but while she doesn’t admit it, she’s garnered a support system on Edisto Beach and a developed a different internal compass. We see her coming back into law enforcement, back into the real world, back into a little romance, as she decides she can’t stay down forever. But she’ll never be like she was, and that unsteadiness knocks her off her game a lot.

3 CA: Why Edisto Island? How do you use setting to create and build suspense?

CHC: No other beach in South Carolina is like Edisto Beach, on Edisto Island. The township fights like hell to keep it family-oriented and non-commercial. No franchises, no neon, no motels. Lights out at dusk between May and October in order to protect the loggerhead turtles. You rent houses, and on this small, thin beach, every house is a very short walk to the surf.

The saying is that you leave your troubles and “other” life on the other side of the big McKinley Washington bridge that you cross to reach the island, and it’s so true. So many year-round natives there (around 600) have assumed lives completely different from the ones they had before relocating to Edisto.

I used that feel to the place to create and build Callie. She indeed is leaving a lot on the other side of the bridge, and yet once she decides to reenter law enforcement, she realizes it’s her responsibility to allow these people to help maintain that feeling for everyone. But with that responsibility comes the realization that she weathers those troubles for them, and it takes a toll.

But I cherish books that utilize setting as character, and these books infuse the island atmosphere throughout. I use real businesses, restaurants, streets, and landmarks. Edisto loves it. The mayor is a big fan, and the chief of police lets me poke fun at his department. The residents rush to the lone bookstore on the island each time a book is released, and the fact that it’s a tourist retreat means that each week new faces appear in the bookstore wanting anything Edisto.

But Edisto is special to me. I retreat there to renourish myself. I own a lot there, bought on a whim and a wish to build a second home and absorb more the area that Callie lives in. Haven’t pulled the trigger yet on that one, but just the fact I own a piece of dirt on Edisto fuels me.

But as far as building suspense, weather changes involving humidity, heat, brine, surf, the ecology and dangers of the sea all play into mystery so well. When I need an obstacle, there’s always the setting, from someone drowning in a marsh to a protagonist drawing the heroine out into some dank, dark, moss-laden jungle. The setting is just too rich not to use when deepening plot or antagonizing the protagonist.

4 CA: What is your best protip? Tell us about a writing habit, technique, or philosophy that keeps your writing sharp.

CHC:  I fight to write daily, even if only 500 words. And I don’t believe you can over-edit. I read my genre religiously, and I am not a fan of reading all genres across the board. I want to concentrate on my mystery talents, not dilute them, so I focus on reading quality mysteries. My favorite, of course, is Raymond Chandler.

5 CA: You can invite any author, living or dead, to dinner at your home. What are you serving and what will the conversation be about?

CHC: Harper Lee. She’s so Southern, and her writing so vibrant and wise. I hadn’t read To Kill a Mockingbird in decades, forgotten how good she was until Go Set a Watchman came out. I ignored all the brouhaha and bought the book for its Southern characters. I was blown away by the story and how she unwound such a controversial subject. Just loved it!

As a Southern girl myself, I would want to pick her brain, listen to her tell how she fleshed out characters, how she feels about storytelling in general, and of course, what suggestions she’d have for my South Carolina stories.

What would we eat? Since I’d be picking her brain about my characters, in my setting, I’d probably choose shrimp and grits with maybe she-crab soup . . . with a simple vanilla pound cake since the entrée is so rich. Sweet tea, of course, but right after we’d darn sure have to pull out the bourbon, and like her, I occasionally like half a cigar on the porch with my drink, while overlooking the lake where I live. Yeah, that visit would be lovely.

6 CA: Can you leave us with a quote, a place, or a concept from a book that inspired you?

CHC: “In writing a novel, when in doubt, have two guys come through the door with guns.” ― Raymond Chandler

While we can’t all write about guys with guns, the point sticks in my head. Remember action and always keep the story moving forward. Which also goes along with this one:

“The faster I write the better my output. If I’m going slow, I’m in trouble. It means I’m pushing the words instead of being pulled by them.” ― Raymond Chandler

Thank you, Hope! Find her Edisto Island series on Amazon.

END_OF_DOCUMENT_TOKEN_TO_BE_REPLACED 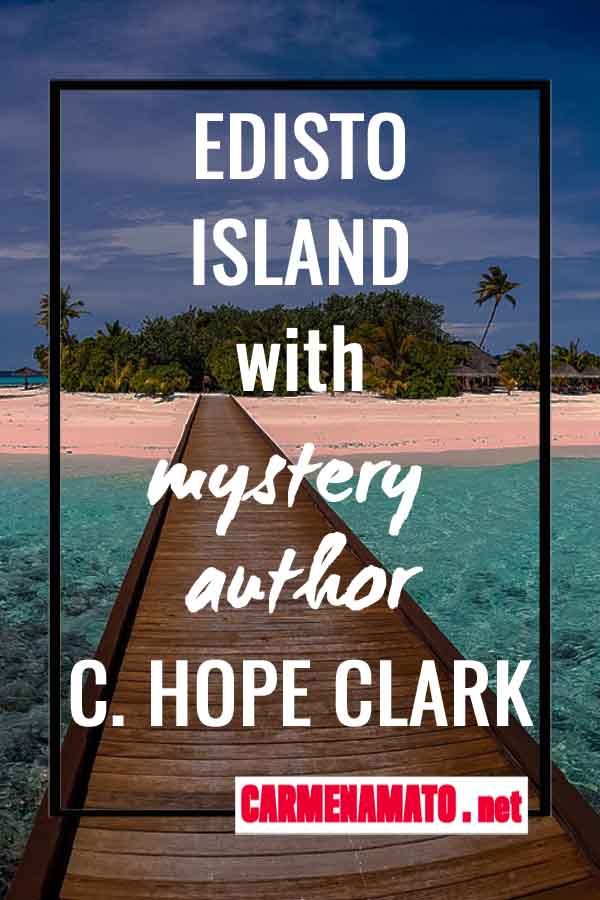