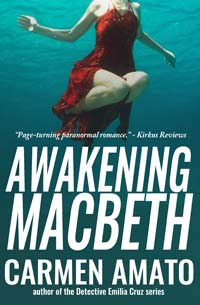 University of Virginia professor Brodie Macbeth is shattered when her father, head of the school’s history department, kills himself by jumping out of a hotel window hours before delivering a lecture at Harvard.

Nothing about his death makes sense, including his strange will.

Brodie must read his collection of British history books and use the license plates from his car or else forfeit the inheritance that will make her rich. Confused and shocked, she signs on the dotted line.

As she begins to read her father’s books, Brodie has terrifying nightmares. In her sleep, someone with corroded eyes threatens to kill her unless she tells them her father’s secret.

Meeting Iraq War veteran Joe Birnam helps ease her grief, although Joe has his own demons to contend with.

Yet when her father’s old friend reveals his true identity and demands the secret, Brodie realizes those nightmares aren’t over.

They’re a real and deadly contest. The prize is Joe Birnam’s immortal soul.