Can an obscure Nicaraguan bird teach us problem solving skills? Yes, but it depends on how hungry you are.

I have the good fortune to live where it is sunny and warm most of the year. Most days start with a workout in the pool. A swimmer is an object to curiosity to the birds in the backyard, most of which are doves with blue-edged wings and yellow-breasted kiskadees. Or grackles.

Related post: The Evil Eye Twice in One Day

Grackles are the local thugs. The Central American version of Poe’s raven. The males are a glossy greenish-black and the females are darkest brown tinged with black. Both have glittering yellow eyes and bad tempers.

They frequently let me know I’m trespassing on their territory. One morning as I swam to the deep end, a male grackle flew to the shallow end and alighted on the top step. When I changed direction he flew to the deep end and regarded me malevolently from the lip of the pool. I changed direction again and he flew above my head to the opposite side. And so the next five laps wore on.

This particular morning, as I hit the deep end, a female grackle flew to the top step at the shallow end. She had a big yellow seed in her mouth which she let fall into the water just rimming the step. As I watched, she periodically picked up the same seed, worried at it a little, then dropped it back in the water. Mrs. Grackle did this three times until she finally picked up the seed and broke it apart in her beak. She gobbled up several of the pieces, then flew away with the leftovers. Two minutes later she was back with another seed. Again she went through the same drop, wait, check, drop, wait, check routine.

Solutions Come from the Strangest Places

Have you figured it out? She was soaking the seed until it became soft enough to crack and eat.

It was as if she’d just written three simple problem-solving tips:

I was struggling with a rewrite of my third novel at the time. Plot elements I’d loved when  I originally wrote the book over a year ago now seemed trite and predictable, two characteristics one should seek to avoid in a mystery. The revised outline looked big and daunting. 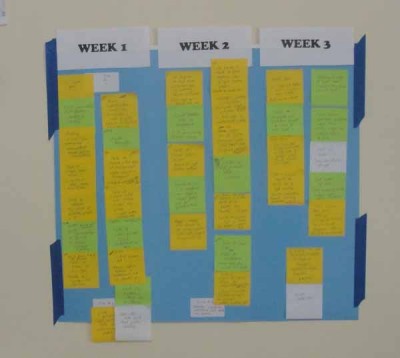 So following Mrs. Grackle’s lead I revised the outline yet again and made it into an easy to follow poster. Each scene became a color coded little “bite.” Doing that allowed me to jettison the heavy parts weighing down the action and add plot twists to heighten the suspense. Suddenly I had a roadmap to the novel’s end.

Resources to help were hiding in plain sight—my writing buddy, a timer to keep to my writing schedule, my love of being able to cross things off a checklist, or in this case, an entry on the poster. The new style outline didn’t mean instant success; there was still hard work ahead but I could be patient, knowing the plan was sound.

These days, the grackles and I still eye each other with suspicion. But it is tinged with mutual respect for problem solving skills.

Or will be, just as soon as I wash the bird crap off my car.

Get it on amazon today!