Mexico City attorney Eddo Cortez Castillo’s unexpected relationship with housemaid Luz de Maria Alba Mora becomes a dangerous vulnerability when he investigates links between the Minister for Public Security and Mexico’s most elusive drug cartel leader. But what Eddo doesn’t know is that Luz is trapped at the bottom of Mexico’s ladder of inequality, where broken dreams and family poverty have brought her to the breaking point.

As presidential elections near, Eddo’s investigation will uncover a political double-cross fueled by blood money and drug cartels. With the help of a secret police network, he’ll follow the trail as it twists and turns through a maze of smuggling and money laundering right up to the Mexican border with the United States. There he’ll find the beating heart of Mexico’s drug culture, where violence buys loyalty, votes are for sale, the odds are against survival, and only a woman whose name means Light of Mary can guide him out.

Luz cannot help Eddo, however, until she finds the courage to confront the social structure she has lived with for so long. She’ll fight a parallel battle of suspense and survival as a soldier in the war being waged in the kitchens of the elite of Mexico City; a silent class war with its own impact on the country. Immigration to the United States may be her best chance for a real life as an artist, but it comes with a crippling price.

When the cartel answers Eddo’s investigation with violence, both he and Luz are caught.  They must each find strength, not only to survive but to defy Mexico’s rigid social structure.

With real characters, passion for the place, and brutal truth pulled from today’s headlines, The Hidden Light of Mexico City illuminates the fight for Mexico’s future.

When the lives of Eddo and Luz converge, and the cartels discover his investigation, they will both have to find the courage to survive. If they do, the real battle will have just begun. 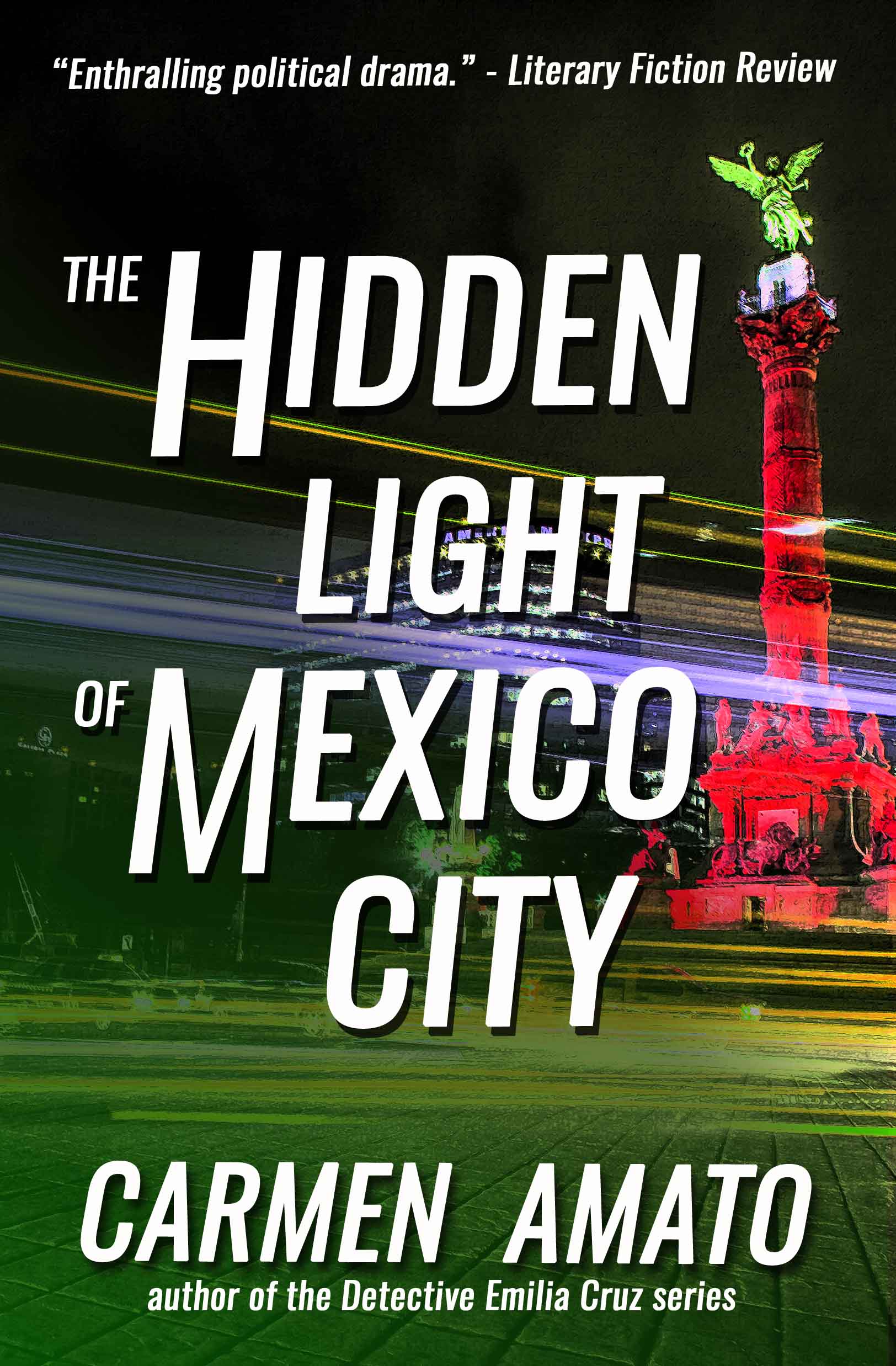 “The next step is to follow the money,” said Eduardo “Eddo” Cortez Castillo.

“That’s quite some story, Eduardo.” Across the table, César Bernal Paz gave his head a bemused shake as if collusion between Mexico’s Minister of Public Security and the elusive leader of the country’s most notorious drug cartel was a remote and amusing concept.

“There’s enough evidence for a warrant.” Eddo felt his scalp prickle under the brown hair he kept as short as a general’s.

“Really,” Bernal Paz said absently. He sliced into the arrachera steak on his plate and put a morsel into his mouth.

Eddo reached inside his Brooks Brothers suit jacket, took out a folded document from the inner pocket, and placed it on the starched tablecloth between the two place settings.

The two men were in a private corner of arguably the most exclusive restaurant in Mexico City. The Sanborn’s restaurant on the top of the historic Casa de Azulejos near the huge Zocalo square was the lunchtime bastion of Mexico’s power elite. The staff was unfailingly discreet, the atmosphere was dim and elegant, and more deals and careers were made and broken there than in the president’s office in Los Pinos.

“The warrant is for the central bank to report all of Hugo’s financial transactions for the past year, including money transferred out of the country,” Eddo said quietly.

Bernal Paz blinked in astonishment, his steak momentarily forgotten. “No. No.” He hastily wiped his lips with his napkin. “Honestly, Eduardo. I can see now why you’ve been telling me all this. But as senior governor, I cannot let the central bank become involved in some petty rivalry between you and your superior.”

“This is not personal, Don César,” Eddo said in all truth. “I hold Hugo de la Madrid Acosta in very high regard. I hope this investigation proves to be nothing. But we need the truth.”

“Yes, of course.” Bernal Paz raised white eyebrows. He was an aristocratic man who clung to the elegant manners and rigid societal rules of those few who controlled the country’s money and had complete faith in their right to do so. He wore a fitted Italian pinstripe suit and a discreet designer tie with matching pocket square. “But you have to see it from my point of view. You are investigating your own minister. Very awkward.”

“The warrant is signed by Judge Arturo Romero,” Eddo said. The problem was that the warrant was Secret. Only a handful of people knew of its existence. Mexico’s legal system was so arcane that if Bernal Paz refused to comply there wasn’t anybody who had the knowledge and legal authority to compel him, including the president.

“You know him. Not just for this.” Bernal Paz made it a statement, not a question.

“My professor in law school.”

“Yes. I recall your father saying that.” The older man leaned back in his overstuffed chair. “I suppose now you’ll tell me that if Judge Romero wins the presidency you’re in the administration.”

“Will you be the youngest?”

Bernal Paz smiled back magnanimously. “I lose track of the years, Eduardo. To me, you’ll always be a boy playing fútbol. Running like the wind with the eyes of an angel.” He wagged a finger at Eddo. “You should be on television.”

Eddo nodded his acceptance of the compliment even as he indicated the document on the table. “Arturo asked that you personally oversee the warrant.”

“And when he gets to be president Judge Romero will remember warmly those who were his friends before the election?” Before Eddo could reply, Bernal Paz reached out with a forefinger and slid the warrant toward Eddo’s plate of salmon. “But Romero might not even get the party nomination now that Lorena’s decided to run.”

Eddo suppressed a grimace. Mexico’s First Lady Lorena Lopez de Betancourt had tried very hard to upstage her husband ever since Fernando Betancourt had been elected president. Her latest antic was to announce that she wanted to be president when her husband’s term expired.

“You don’t think she’ll get the nomination?” Bernal Paz polished off his steak. The older man’s relief that they were no longer talking about the warrant was palpable.

“She has no financial backing.” Eddo slid the warrant back to Bernal Paz’s side of the table. “Can you get me the information within two weeks?”

“Really, Eduardo.” Bernal Paz sounded like a stern schoolmaster speaking to a wayward pupil. “The central bank cannot be involved in dirty politics.”

“Ministers of the government cannot be permitted to join the cartels.” Eddo kept his voice low, although the effort was nearly killing him. He wanted to jump up and shout, make Bernal Paz see how critical it was that they have the banking records, squeeze the old man by the throat until the numbers popped out of his ears.

“All the evidence you have so far is circumstantial.” Bernal Paz made a dismissive gesture with his fork. “The land his son supposedly bought from El Toro–.”

“Reynoldo de la Madrid is 14 years old, Don César,” Eddo interrupted. The sale of a large tract of desert land from a man using cartel boss El Toro’s Christian name to one Reynoldo de la Madrid had been recorded by the town clerk of Anahuac, a small town south of Nuevo Laredo, and reported by a local cop. “Some teenager in the most expensive private Catholic school in the country, with bodyguards around him even at the Santa Fe shopping mall, is not making his own deals with cartels.”

“Eduardo, you don’t understand.” Bernal Paz pursed his lips and pushed the warrant back across the table. “I would like the central bank to help, but getting this type of information is very difficult. It cannot be done and that is final.”

Are you ready for the Mystery Ahead?

Sign up for the Mystery Ahead monthly and get the ultimate Detective Emilia Cruz Starter Library.