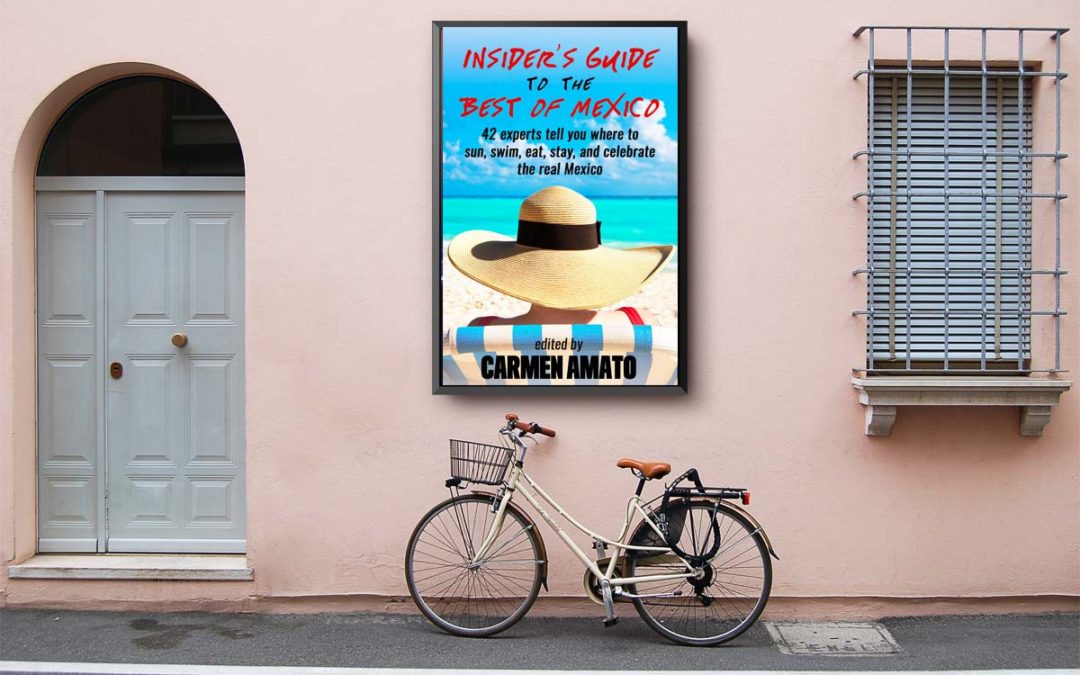 Mexico’s rich culture is a big part of my Detective Emilia Cruz series set in Acapulco and inspired a new project: The Insider’s Guide to the Best of Mexico. This free guide is a collection of great stories from 36 experts who shared their insider tales of where to eat, play, swim, and stay in Mexico. Here are a few of the fiestas from the free Insider’s Guide, which you can get here. 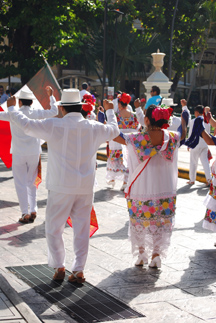 Mérida weekends are all about fun. The Plaza Grande is huge and inviting. Flanked by the oldest cathedral on mainland America, it’s filled with covered stands selling the colorful embroidered clothing of the region, toys, and musical instruments. Food stands ring the edges. The people of this region are the friendliest in all Mexico. Sunday is the day for people to bloom. It begins with everyone headed to church in puffy jackets, since the temperature can plummet overnight to 72º Fahrenheit.

On the Paseo Montejo, a Victorian promenade boulevard, white horse-drawn carriages beckon. When sisal fiber, a product of the agave plant, was developed for rope and clothing in the 1880s, the wealthy planters built their townhouses on this street. France offered design ideas, and the influence of the Second Empire was strong. Here their daughters were introduced into society, and their sons into business. This was the only period of great wealth the Yucatán ever had. When artificial fibers came in, it was over within 75 years.

On Sunday, the Paseo’s outbound direction is closed to traffic. It streams with families on foot and on bicycles. The greatest of these mansions, the Palacio Cantón, is now the Anthropology and History Museum, which houses a stunning collection of artifacts from the surrounding jungle cities.

John Scherber, author of the Paul Zacher mystery series and other books, www.sanmiguelallendebooks.com

San Blas is a centuries-old west coast port town, rich in history and character but always struggling to outgrow its status as a second class tourist town. Still more kin to Bogart’s Casablanca than to contemporary Cancún, the town is too old to put on Riviera airs. Long accustomed to conquistadors, adventurers, and schemers, San Blas has come to comfortable terms with itself, past and present, mellow and wise with endurance, unimpressed with the slick and pretentious; a Mexican port town of hard-working fishermen, shopkeepers, and restauranteurs, not a resort catering to the pampered tourist. 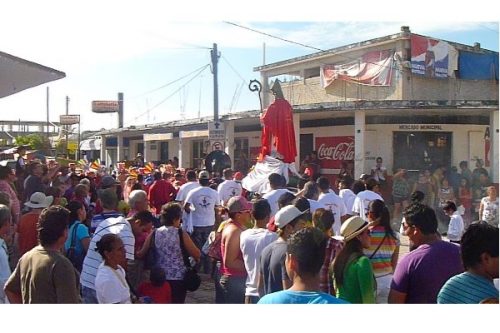 Named after the martyr St. Blaise, fourth century physician and Bishop of Sebastia, Armenia, San Blas celebrates its namesake Feast Day on February 3 each year with religious processions, a parade of floats and local children in native costume, dances in the plaza, and the old-style firework tower of screaming, smoking, whistling, whirring explosive madness that would cause strokes in State-side mothers and OSHA inspectors.

The fiesta highlight comes with a procession taking the saint’s statue from the church, parading him through town with a brass band, then transporting him on a shrimp boat out the estuary to the Rock of the Virgin with all the local fishermen and their families following in a fleet of decorated boats.

On the open Pacific waters each boat passes under St. Blaise in the shrimp boat bow to receive blessing of sprinkled holy water and a prayer for year’s bounteous catch.

Related: Why set a Mystery in Mexico

The story goes that alebrijes, colorful monsters with parts of various animals, were first seen in the nightmares of cartonería (paper maché) artist Pedro Linares in the 1950s, who claimed they whispered their name to him. 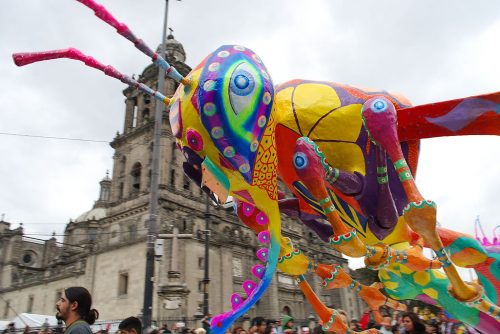 True or not, this story is part of the lore that the creatures have as both scary and magical at the same time. Their allure in Mexico City and beyond has only grown over the decades and can be credited with saving cartonerìa. In 2007, the Popular Art Museum (Museo de Arte Popular) decided to challenge artisans to create “monster-sized” versions which have over the years exceeded over two meters in height and five meters in length. My husband and I have been fortunate to work with this innovative museum and receive special permission to cover this event and others for Wikipedia and my blog.

The giant creatures are created as a labor of love, to appear only in one parade, taking months to make, not to mention many kilos of paper, paste, wire and more. Each year the alebrijes become more creative, both in design and the materials used, although cartonería is always the base. On the day of the parade in October, these creations are wheeled by their makers and others from the main square of Mexico City to the Angel of Independence monument. The event draws thousands of spectators as well as extensive local media coverage.

Ready for the rest? Get the FREE Insider’s Guide to the Best of Mexico here.