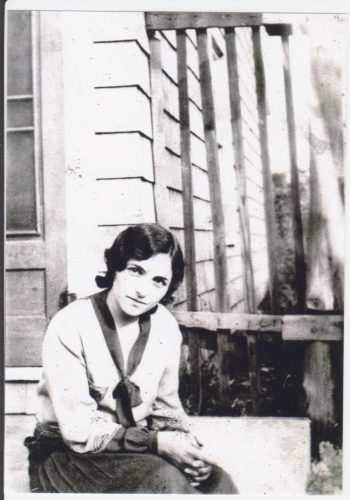 was my grandmother and one of the major influences in my life. She was clever, talented, sharp-witted, opinionated, practical.  She was true to the person she wanted to be; true to her beliefs and opinions and understanding of life.  There was always clarity in dealing with her, a natural force that drew her children and grandchildren to her.  She was the reference point around which we circled, sure of its stability and strength. Our success in life is a tribute to her.

Throughout her life she loved clothes and accessories and used her sewing skills and innate fashion sense to make the most of things on a blue-collar budget.  She loved Vogue although in later years decried the silliness of some of the fashion layouts.

She was a staunch friend, talking to most of her girlfriends every morning. Her best friend was Lillian Rizzuto, the mother of John Rizzuto, former president of Givenchy, Inc., the NY-based office of the Paris fashion house.   Lillian had been one of the bridesmaids when Ann married Joe Sestito in an arranged marriage in 1928.  Ann and Joe raised three children. Their son became a Catholic priest and their two daughters each had four children.

When I was a child, Ann and  Joe lived next door. During my preschool years my grandmother was my babysitter. I remember her execising daily to Jack LaLanne and planning meetings of the various Catholic women’s groups to which she belonged.  Nap time was in her bedroom and I passed the time looking out her window or leafing through the few books she had including the autobiography of actor Pat O’Brien and the biography of Bishop Fulton Sheen. While still in elementary school she taught me how to sew, making sure that we were frugal with fabric, moving the pattern pieces around to minimize the fabric used (a talent that later annoyed middle grade home economics teachers who wanted us to follow the diagram that came with the McCalls patterns.)  In high school I’d sit on the rug in her bedroom while she sat in her rocker and we’d watch action shows–The A Team, Riptide, even The Dukes of Hazzard.

Ann had a passion for Scrabble and it was a point of pride for whomever in the family could beat her.  We kept all the scorecards and she nearly always won.  An enormous Random House dictionary sat in its library-type stand in the living room and was invariably used.

As I write the memories flood back–being allowed to set the table with the fancy green-rimmed Noritake china her son the Navy chaplin sent home from Vietnam; impromptu afternoon hors d’oeuvre get-togethers when out of town friends dropped in; the rare times when my grandparents took one of us grandchildren to a restaurant or to the big department store downtown.  Sunday was the highlight of the week.  That’s when when all the aunts and uncles and cousins crammed into her kitchen after church for coffee and cosa dolce.  It was the the time for everyone to circle around the reference point.

After she died my mother and I looked through an old photo album my grandmother had kept.  She’d been orphaned at an early age–never quite knew her own date of birth–so there were no pictures of her with her parents, not to mention any birthday or birth certificate. She’d been sent to live with an aunt and uncle whom she referred to as her foster parents.  I inferred that the aunt had not been kind.

The album pictures were pasted onto black paper and she’d captioned them in white pencil. Her name changed as the girl in the pictures changed into a woman, from Marianne to Marion to Ann.  It was if she created and recreated herself, until she had no more questions of who she was.  And once she knew, she could help the rest of us create and recreate until we became our own reference points. 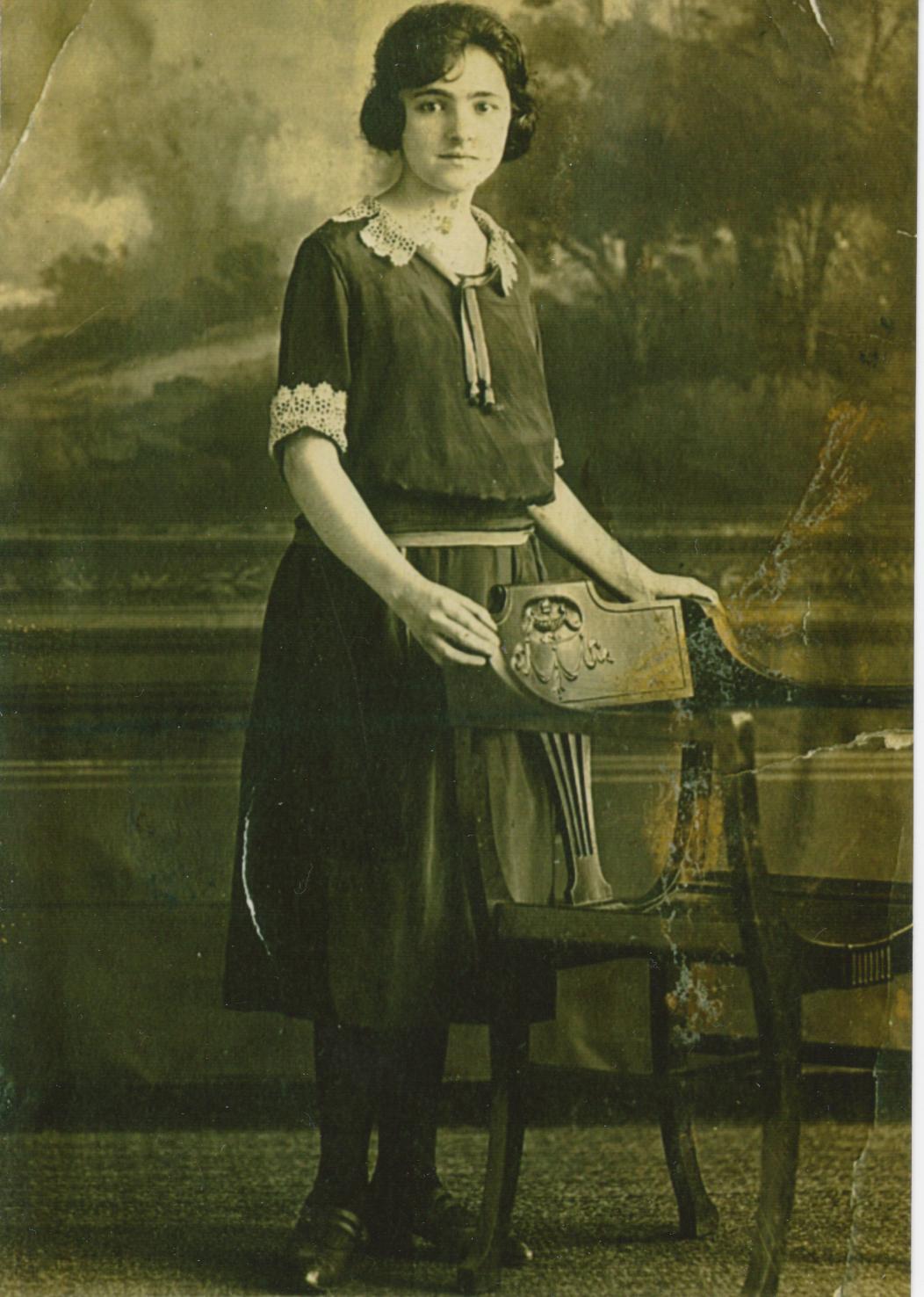 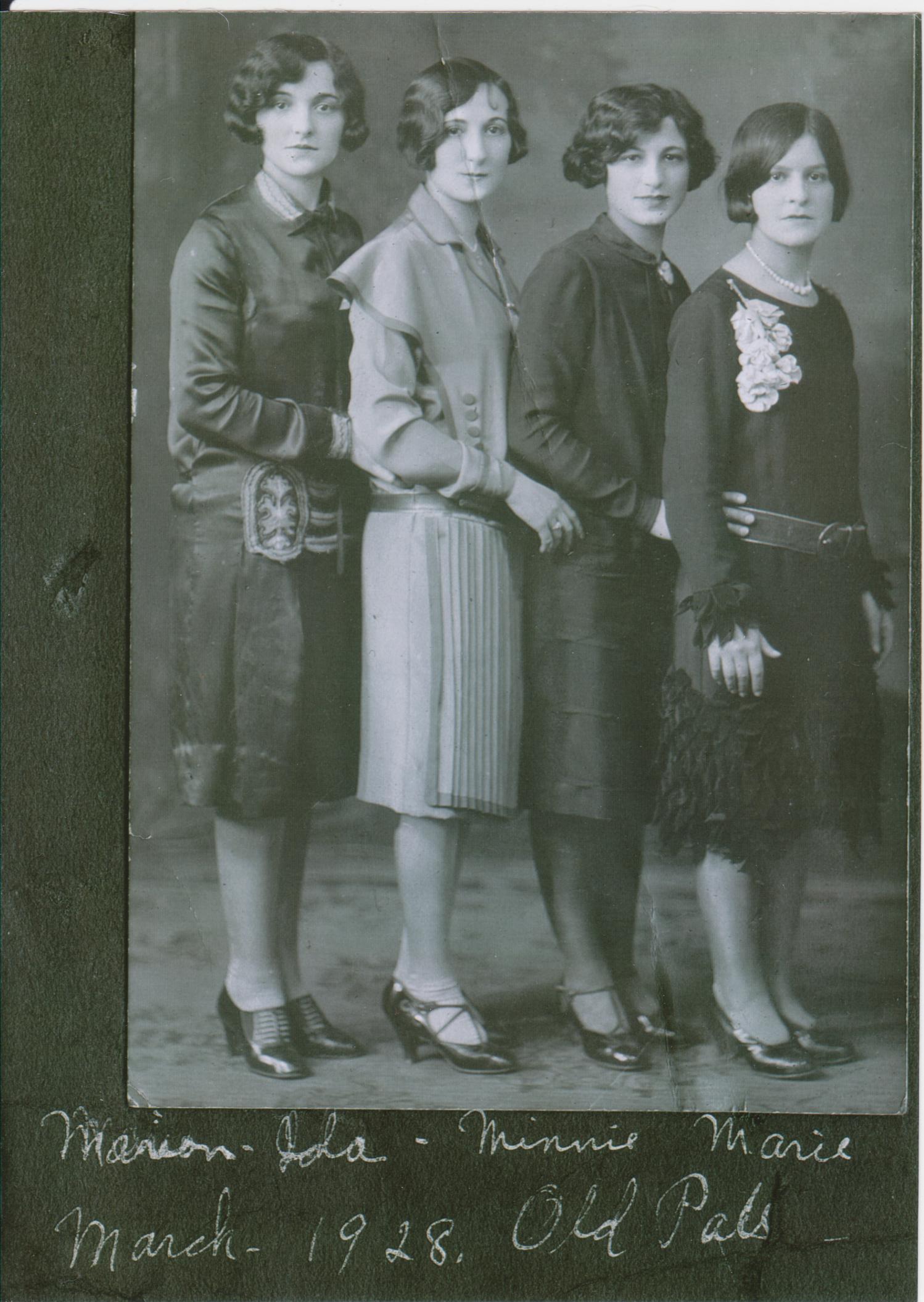 The caption reads: Marion, Ida, Minnie, Marie. March 1928. Old Pals. Ann, then calling herself “Marion,” is the girl on the far left. 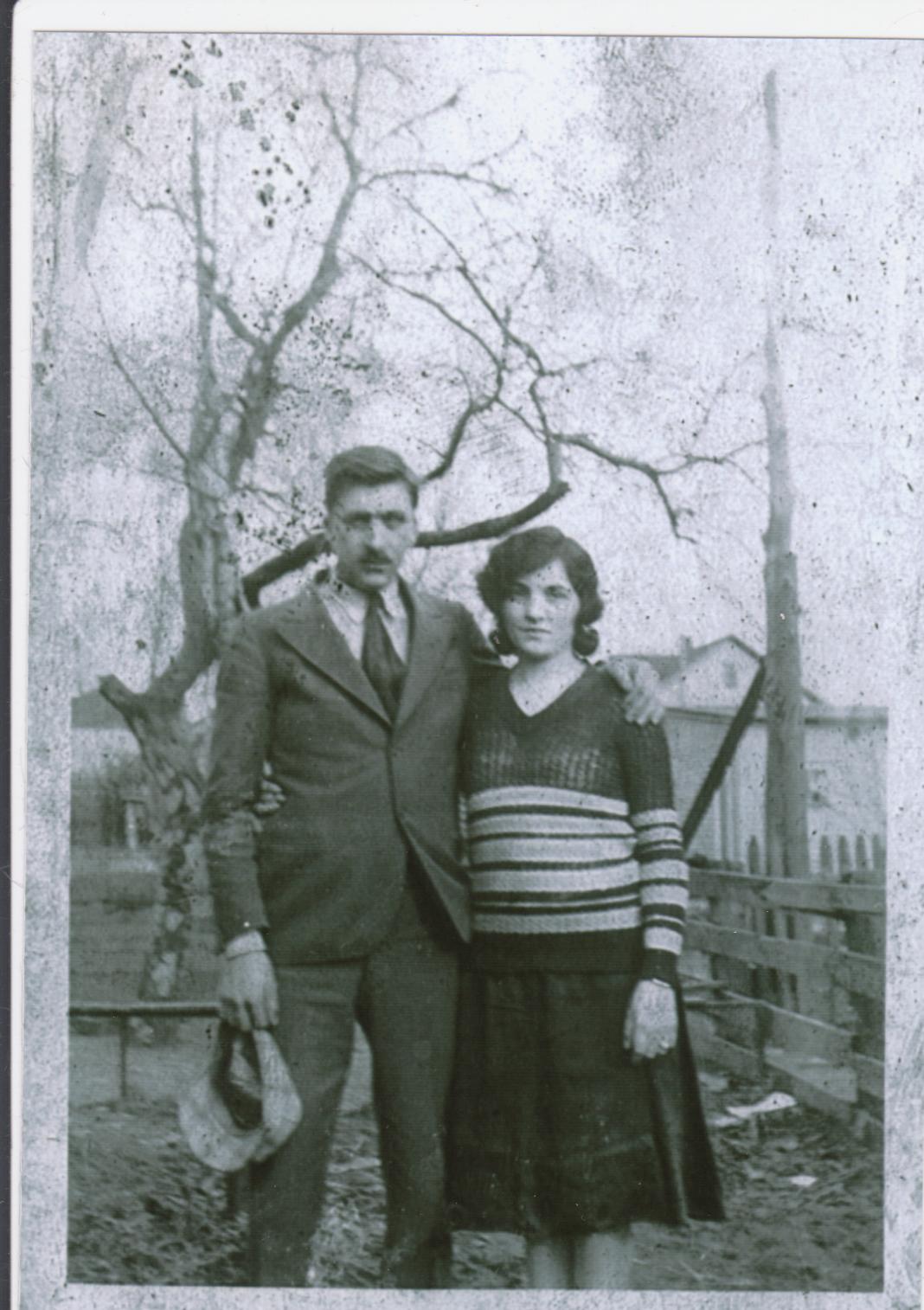 Ann and Joe, probably shortly after they were married in 1928. Ann appears to be pregnant. Her hair was so dark and thick that her friends called her “Sheba.”

At the time Joe was Deputy Sheriff. In later years he would regale us with stories of outwitting the local mafiosos.

Ann and Joe’s wedding reception was marred by a double mafia murder the same day. Both of the dead had been wedding guests. 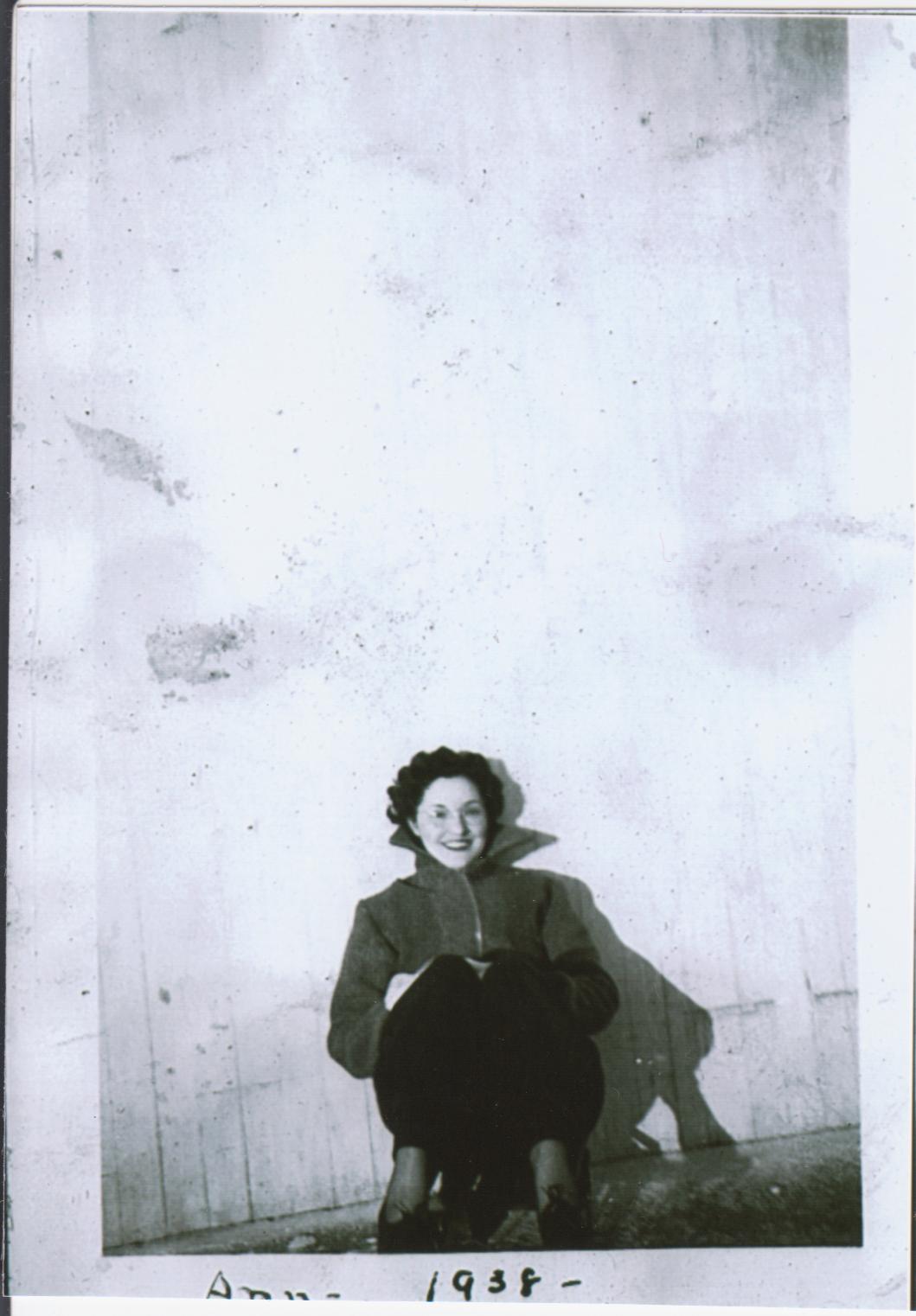 By 1938, Marianne and Marion had been left behind and she was Ann.

This is the only picture of her in pants. She never wore them later in life; nor did she ever drive.

The Depression was a difficult time for Ann and Joe. Their children were small. At various times he found work as a barber, a chicken salesman, before becoming a supervisor at the Revere Copper and Brass rolling mill during World War II.

After retiring from Revere, Joe continued to work as a plumber and a process server for Oneida County, NY, until his 90’s.

Ann and Joe didn’t have the typical love story. It was an arranged marriage; he had a reputation as a wild troublemaker and she loved clothes and opera and had more education.

Over the years, cooking together helped lessen the tension. They often made homemade pasta and sausage for family events. 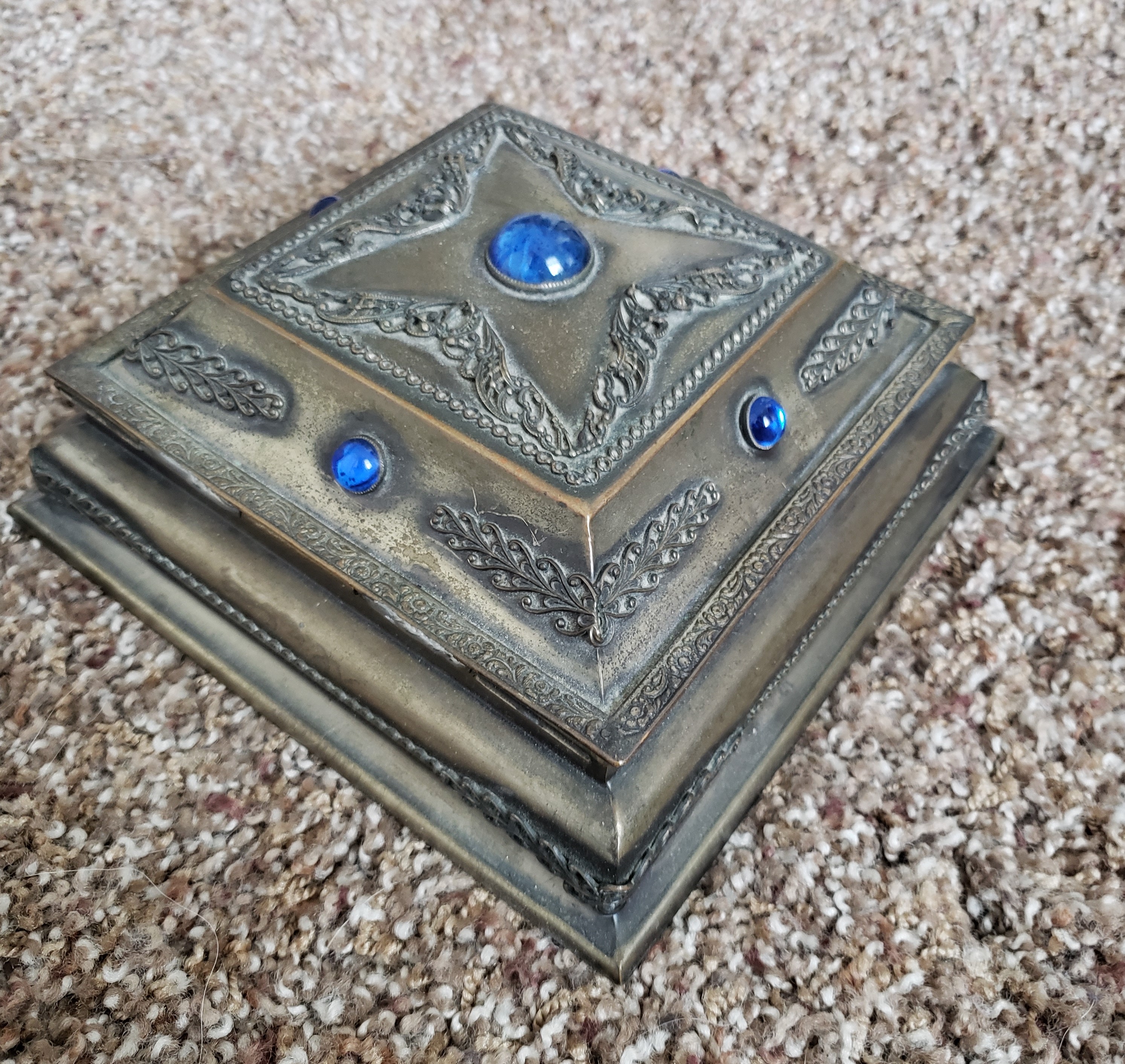 I have a few of Ann’s things, including a bronze box. She’d been engaged to a medical student but was forced to break it off and enter into the arranged marriage with Joe. The medical student had given her a string of pearls as an engagement gift.

Her foster parents forced her to return the pearls but she always kept the box they came in. She never told me the student’s name.