The Year We Made a Difference for Water.org 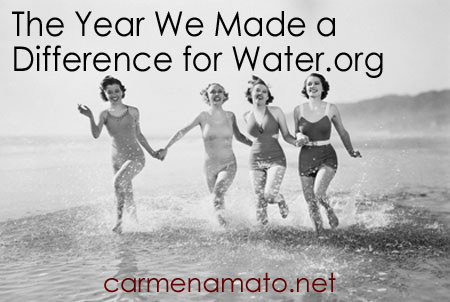 In 2014, I donated $1 from the sale of Kindle books to Water.org, the charity co-founded by Matt Damon to bring clean and safe water to communities worldwide. The goal was to provide clean water for life to 25 persons. The year-long campaign was called Writing for Water.

How The Fundraiser Worked

Every month in 2014 I tracked sales using Amazon’s KDP author dashboard and calculated how many Kindle ebooks I sold. I did not count giveaways, freebies, or print sales. In some months, when I ran a sale on a Kindle edition, the net profit on a Kindle edition could be less than $1. Didn’t matter. A sale was a sale and equated to $1 in donations.

I created fundraiser pages at Water.org’s website to explain what I was doing, showcase other authors who were participating, and submit my donations via credit card. At first I’d hoped to create a 12 month fundraiser on the site, which would have been a handy link to promote, but Water.org only lets you do it for 90 days at a time.

I also created a Writing for Water page on my website to explain what I was doing, plus a monthly blog post to track progress and hold myself accountable. 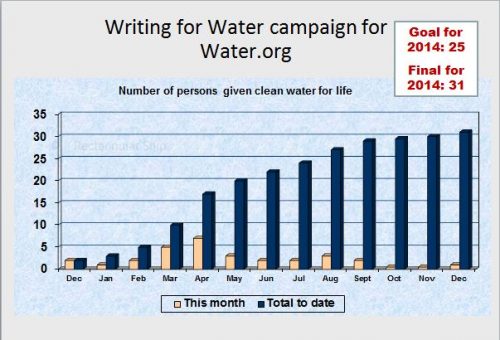 Enough money was donated to Water.org to provide 25 people with clean water for life by August 2014. Sales slowed after that, due to changes in Amazon’s distribution streams. Overall, the year ended with 31 people able to gain access to clean water for life.

I didn’t realize how much time and effort it was going to take to promote other authors, promote the effort, promote our progress, and try to grow participation. I should have done some research about how the best fundraisers are promoted and planned out the effort before January 2014.

Beyond social media, the most useful thing I did was to send out a free press release which garnered a nice exchange with the folks at Water.org. I also mentioned the effort in a couple of different author interviews. But I should have had a list of things to do and been more consistent and focused.

An unexpected complicating factor was that Water.org only creates 90-day fundraisers when I wanted the fundraiser to last 365 days. This meant that I had to track when a fundraiser ended, change all the links on my pages, and create new ones. Then I ran into problems when I unwittingly created one fundraiser using my Facebook profile and another using my Twitter profile. In short, it was a structural problem that added to the workload. It could have been partially mitigated by using a dedicated campaign calendar, much like a blog calendar.

When I asked other authors to join me, six pledged to help. Three followed through and we cross-promoted each other in a mutual effort to boost sales. The other three were never heard from again.

A 50% opt-out rate is disappointing but probably not surprising given today’s overcommitted world. But it would have been nice to at least get a note saying they weren’t going to participate after all.

The non-participating authors had responded to a call I posted in a Facebook or Goodreads author group. We didn’t have a personal connection beforehand. Maybe that is the point.

The three authors who responded were terrific: Norm Hamilton, author of BY THINE OWN WELL; Jerry Last, author of the Roger and Suzanne mysteries; and Sharon Lee Johnson, author of a string of ebooks including the ME VS ZOMBIES stories.

Subaru uses charitable donations as a means of building its brand and making purchasers feel good about the car they buy. I wasn’t sure if the same should/would apply to books and why readers purchase them.

Bottom line, I don’t think my donations to Water.org made a difference to book buyers. Nor did readers flock to this blog to hear how the campaign was going. I met the goal, with a little help from friends, but didn’t sell in numbers big enough to warrant a Big Event or even a new Water.org YouTube video.

Was the campaign too low key? Maybe. But it felt strange to be all promotion-y.

I’ll continue to support Water.org, because it’s a critical mission. But I know that if I want to finish the next Emilia Cruz novel, as well as a couple of other writerly projects, I can’t do a big campaign again.

Instead, I’ll contribute on my own schedule, without using Water.org fundraiser pages. I also won’t use Kindle sales as the yardstick. I’ll be expanding distribution beyond Amazon in 2015 so my income and accounting are in for some changes.

But no matter how much I’m able to donate, it will make a difference. Whether they know it or not, so will my readers.