Bookstores of the Future: 5 Lessons About Survival of the Fittest

Will bookstores survive? Must they innovate in order to stay relevant and solvent in the era of ebooks and ecommerce?

Simply out of curiosity, I began posing this question to authors, book bloggers, publishers, and store owners.

This led to a series of articles on this blog, including 25 Influential Authors Weigh In, 12 Influential Bloggers Debate, and 13 Divergent Views from Publishing Insiders. The series included some memorable virtual encounters such as with veteran thriller writer Dale Brown, blogger and author extraordinaire C. M. Mayo, Lebanon-based publisher Carole Corm, and #LitChat host Carolyn Burns Bass.

The result is some personal conclusions, which likely run counter to traditional publishing’s preferences. I make no excuses; these conclusions are based only on my experience asking questions. I’m a mystery author and claim no expertise or management experience in the publishing field. Which might be a good thing. But I digress.

After 7 months and over 800 emails, here are my conclusions.

1. Bookstore owners can no longer stay in business simply because they love books

Surprisingly, bookstore owners were the least responsive out of all the groups I queried,  with whopping a 5% response rate. This compares to authors (60%) and book bloggers (72%). Those who did respond, however, had something smart to say:

Emily Stavrou, Schuler Books & Music,  Michigan, www.SchulerBooks.com Schuler Books & Music, Michigan-based, large-format, independent bookstore (established in 1982), has credited its continued success with the ability to evolve quickly as the market changes.  Over the years, Schuler has diversified the bookstores’ inventory to include unique gift merchandise, games and puzzles, home accessories, and more.  Schuler Books has developed a strong Used Books & Media section in each of the stores that continues to be successful.   Over the years, Schuler has added and expanded each location to include a full-service gourmet cafe, and has integrated Chapbook Press,  a publishing arm of the company,  with their recent purchase of the innovative Espresso Book Machine for print-on-demand book publishing. These are just a few ways Schuler Books has continued to remain a vibrant part of an ever-changing market.

Not to be overlooked, technology has become an ally in innovation for Schuler Books. Utilizing social media to connect and collaborate with community groups & non-profit organizations locally has proven to be a wonderful way to bring business to the bookstore.  Schuler offers a conference room space for hosting monthly meetings, and brings in authors for events pertaining to the organization’s focus.  They also offer fundraising opportunities through many community service efforts.  These partnerships have had a positive effect on business in many ways.  The cafes see additional business through catering revenue; marketing efforts get a broad audience through the benefiting organization’s supporters, and the bookstore is able connect with their community in a meaningful way.

ABC offers local authors a chance to print and publish and sell their book at ABC. The EBM, or like ABC’s owner Lynn Kaplanian Buller likes to call it: fab lab for books, is situated in both stores. ABC also offers local ( and self published) authors a chance to present their book at Meet My Book events or pitch their book (idea) to a professional publisher once a month. The Espresso Book Machine® (EBM), which Time Magazine named an “Invention of the Year,” provides a revolutionary direct-to-consumer distribution model for books. Put simply, the EBM is an automated book-making machine. The operator selects a title to print, and within a few minutes a book emerges: bound and trimmed with a full-color cover.

Pete Mulvihill, Green Apple Books, San Francisco, CA http://www.greenapplebooks.com/CBD-at-green-apple-booksGreen Apple spearheaded the effort to create California Bookstore Day–a statewide celebration of books, authors, and indy bookstores. We took the lead, from convincing the Northern California Independent Booksellers Association to back the idea to getting publishers and authors on board, from launching an IndieGoGo campaign to get it off the ground to finding the perfect candidate to produce the event. Now, thirteen unique books and art pieces will be featured and sold at 93 indy bookstores in CA on one day only–May 3, 2014.

To stay competitive, I added more than books to the store. To succeed and remain relevant, I knew that I needed more than readers to enter the store; I needed to reach people who had other interests.Besides a huge stock of books, we also carry DVDs, CDs, albums, jewelry, and collectables. Due to the variety, we have more opportunity to reach new customers; and once in the door, they discover a world of books.

2. The debate over print vs ebook is both emotional and distracting

Asking questions about how bookstores might look in the future, instead of leading to discussions about shared retail space, community partnerships, or clever promotions, in almost every case led to a debate about print vs ebooks. Although publishing insider Doris Heilmann of  SavvyBookWriters.com/blog and author Jane Rosenthal had some actionable ideas, many respondents were less ready to talk about practical solutions than were willing to discuss the impact of ebooks. This view was brought home to me again during a recent #LitChat session on Twitter sponsored by Carolyn Burns Bass’s Litchat.com website. While the moderator’s questions were designed to spark a debate on bookstore innovation, most of the chat was another print vs ebook discussion, with firm views on both sides.

3. The elephant in the room is quite comfortable, thank you

Bookstores are being squeezed on two sides, in my view. The first is from the chokehold on distribution by the traditional publishing industry. Major publishers control the distribution funnel with a limited number of select books, store displays, and may even dictate book placement.

The second squeeze is from the growing number of independent author or small press titles that aren’t in the distribution funnel, yet are increasingly popular with readers who find them through book blogs, Amazon, and other online outlets. Authors and small presses bemoan the fact that they cannot get their print books into bookstores, with a few exceptions for local connections. There is no systematic small press or indie author distribution network to stores. Plus, there is no return policy as with traditionally published books, given that most small publishers and independent authors operate on a just-in-time inventory basis.

Author Bob Mayer, who also has his own Cool Gus publishing imprint, commented that “The bottom line is that authors will totally support bookstores when that support is extended the other way.”

The traditional publishers’ return policy is often mentioned as the stopper. After selling the store a chunky quota of books, publishers accept returns of the unsold. As long as enough large stores survive for this model to continue to work, there is little incentive for publishers to shift or take on distribution of books they don’t publish.

Can this dynamic last much longer? Either bookstores will be able to innovate enough to stay ahead of the dual squeeze, or enough will fail to significantly erode the traditional distribution model. But here’s the catch–publishers can make up the difference in print returns with ebooks, leaving bookstores that rely on print in the cold.

4. The power of the backlist

I was most surprised to receive comments from established–no, let’s be frank, they are famous– authors acknowledging the power of ebooks. Dale Brown and Bernard Cornwell were among them, with Brown saying “It’s so easy and convenient to get a book these days, and with the Internet you don’t need to browse through a bookstore’s shelves to find a new release from a favorite author–Facebook, Twitter, a Web site, or the blogosphere will inform you.”

Brown, Cornwell, and Mayer are all prolific authors with extensive backlists. They typify the authors who have the most to gain from ebooks, which are always for sale and never out of print. In contrast, bookstores generally don’t have the space to carry all the print titles by very prolific authors. The more titles an author has, it would seem, the less incentive to align with the traditional publishing distribution model.

5. The reality of books as part of the highly competitive entertainment industry

Most people associated with books and publishing regard books as something separate from other entertainment options such as music, television, or (gasp) online gaming. But for much of the book world, especially for fiction, that isn’t true. Many entertainment options are available to take up the consumer’s time and books are one of those choices. My own teenagers have shown me that.

Countering the entertainment option, many respondents said the bookstores of the future should be quiet places to browse, with a coffee bar. Basically, a library with a Starbucks attached. That model won’t pay the bills.

What will pay the bills, however, is using bookstore space to create a broader retail experience. Whether it is linking books with food and drink, or a service or an activity like hotel accommodations, an approach that generates more income streams will let bookstores survive. Are there still music stores? Yes, but they sell more than just CD’s or LPs or are part of a larger retail concept. Ernest Tubbs’ in Nashville might be the exception, but heck, they don’t call it Music City for nothing.

I wrote about a few innovating bookstore examples early in the series. Stores in Europe, for example, with the grand new Foyle’s in London, are taking the broad view and building around it.

Overall, this series was harder than I thought it would be. It was hard to justify the resolute business-as-usual attitude of traditional publishers–and reading sneery literary agent Donald Maass’s recent comments about “freight class” authors–didn’t help. Neither did the near-deafening silence from store owners, whose lack of participation was underscored by some truly terrible store websites.

Yet I’m optimistic. Many print books don’t translate well to current ebook technology and are best served up in print. There is a dedicated cadre of print devotees who will spend the extra dollar for a print book and drive the extra distance to find the store. Stores that find the sweet spot between service, community, and creating a retail experience will survive and thrive.

I’ve been asked what would my perfect bookstore look like. I’d call it The Book Bar. The walls would be lined with books to browse, specialty drinks would be named after memorable titles and authors (the Detective Emilia Cruz Hot Pepper Mojito, for example), and it would be an awesome venue for author chats, book clubs, speed dating, and singles nights. Not all at once, of course. 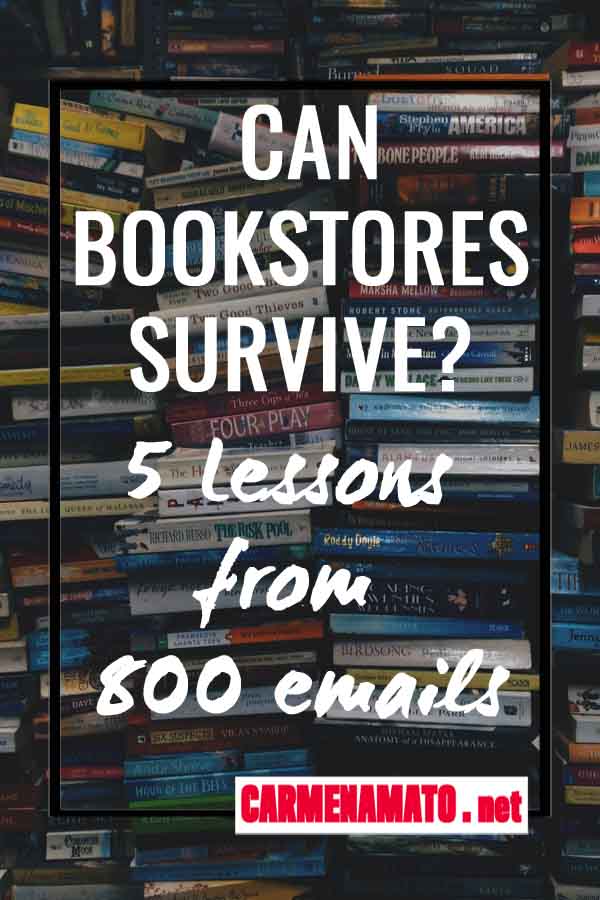