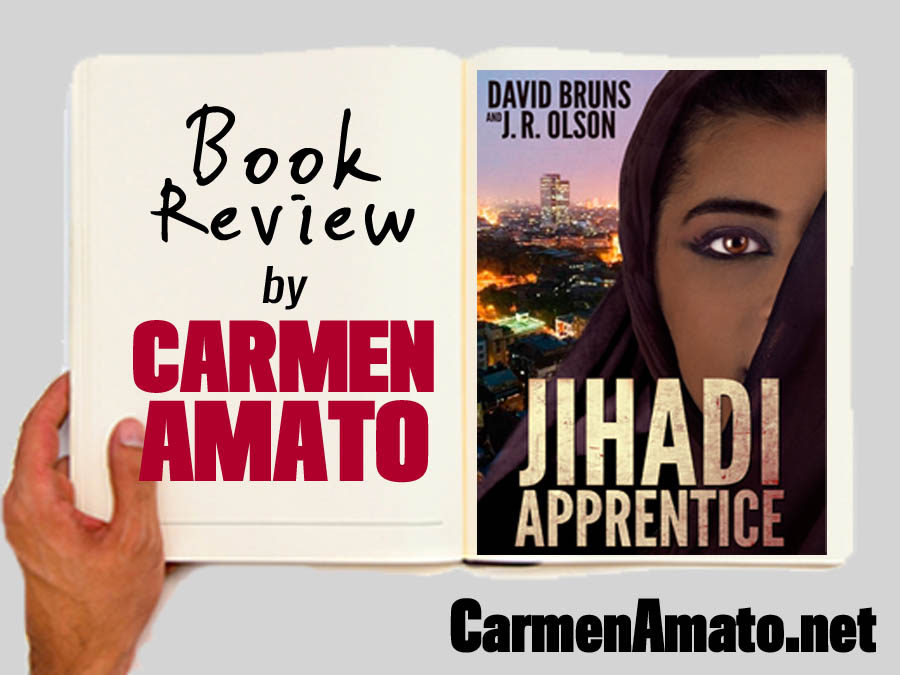 I write mysteries and thrillers and love to read them, too. In this book review, I look at JIHADI APPRENTICE by David Bruns and J.R. Olson, a very modern thriller with an insider’s ring of authenticity.

With a compelling scenario and characters at cross purposes, JIHADI APPRENTICE exposes the  motivations and manipulations of global terrorism as well as the Herculean burden carried by those hunting terrorism’s ringleaders. In the style of Ken Follett’s TRIPLE or Brad Thor’s latest offering, we watch the bad guys with mounting dread and pray for the good guys who must work in sync but are primed for mistrust.

The centerpiece of the story is the recruitment of Aya, a Muslim teen in Minneapolis, by Imaan, a Somali folk singer who uses her fame within the global Somali diaspora to recruit terror cells. Their interpersonal dynamics draw on the Somali community’s search to find its footing in American society in Minneapolis; Imaan is easily able to exploit the restless Aya and put words in her mouth. But Imaan is being manipulated as well, and we see up close and personal how terrorist leaders ruthlessly use others to advance their creed.

Ranged against Imaan and her shadowy puppetmaster are three US officials we met in the authors’ WEAPONS OF MASS DECEPTION; an workaholic FBI agent, a Navy officer with a covert operations background, and an intelligence officer with an unlikely working relationship with an Iranian counterpart. They each have a piece of the puzzle when it comes to hunting terrorists and stopping recruitment, but are operating blind for the most part, digging up fragmentary information, encountering red herrings, and coping with  competing agendas. The job takes its toll, notably on the romance between the FBI agent and the Navy officer. Even the secondary characters are well drawn and relateable. In particular, a female Mossad agent makes a powerful cameo that illustrates the risk of collecting intelligence in the terrorists’ territory.

Related: Book Review Cheatsheet: Learn How to Write a Review that Matters

The pacing is terrific, the situations are believable, and the action keeps up a truly unrelenting tempo. The last quarter of the book is like dominoes falling; you can’t help but keep reading. The only problem with JIHADI APPRENTICE is that the next book with this cast of characters won’t be here soon enough.

Get it here on Amazon

Verdict: An exciting and contemporary page-turner in which terrorism is a high-stakes game played with people’s lives on a global scale.